Photo by Max Forster Visitors are asked to walk on designated trails in order to prevent the damage caused by "social" trails.

Photo by Max Forster Grove of Titans in 2015, prior to heavy trampling and denuding of understory vegetation.

Perhaps one of the few things looming larger than the ancient redwoods known as the Grove of Titans is the legend that sprung up around them following the trees' "discovery" two decades ago.

Catapulted into a eco-celebrity status after the finding was chronicled in the book The Wild Trees, visiting the grove nestled in Jedediah Smith Redwoods State Park became somewhat of "bucket list item" for some, according to Brett Silver, acting sector superintendent for California State Parks.

That placed the ancient landscape with ferns up to 6 feet high on a collision course with ever-growing crowds pursuing the now not-so-secret location of the mighty stand, which has no official trail access. 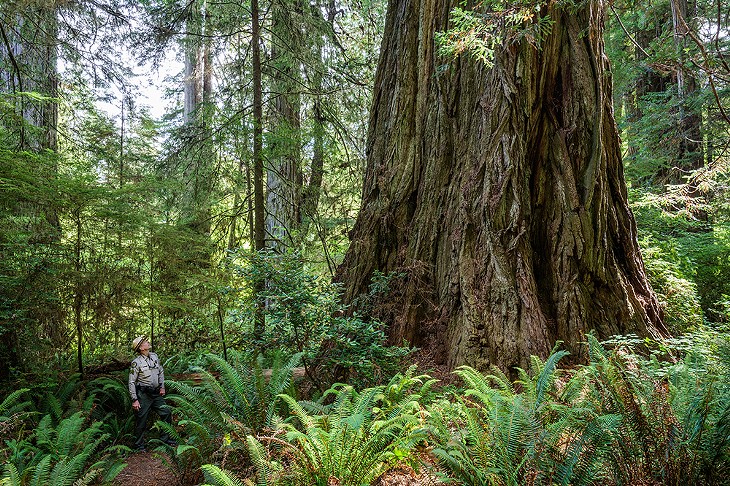 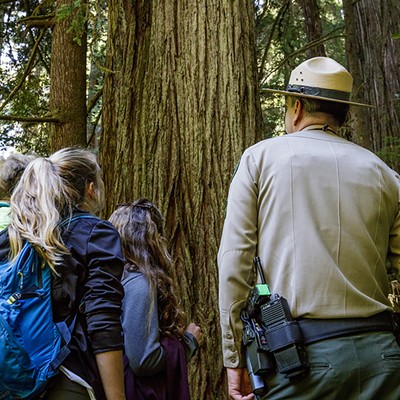 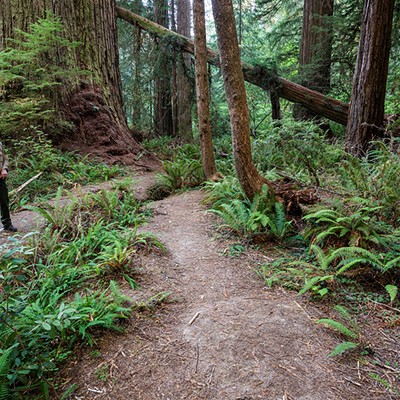 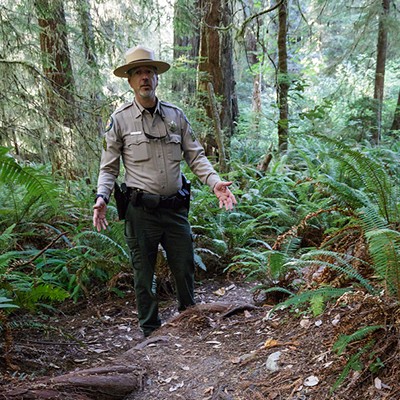 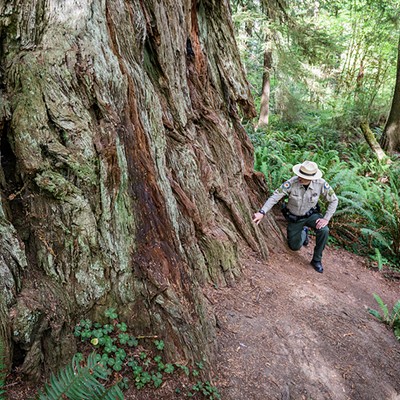 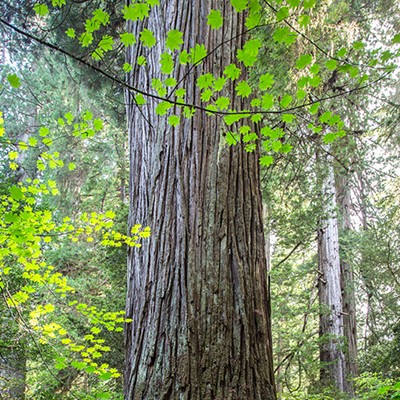 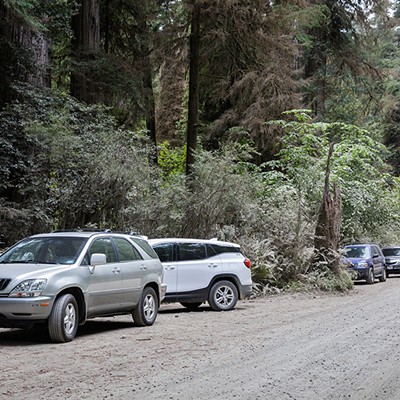 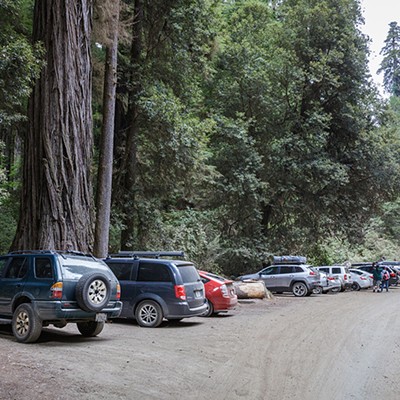 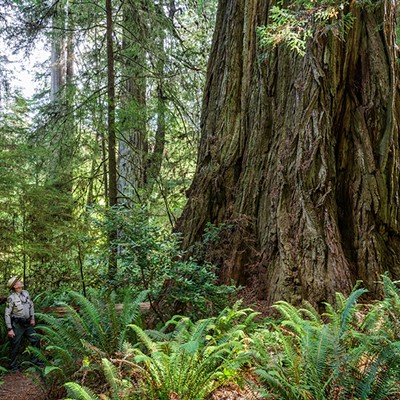 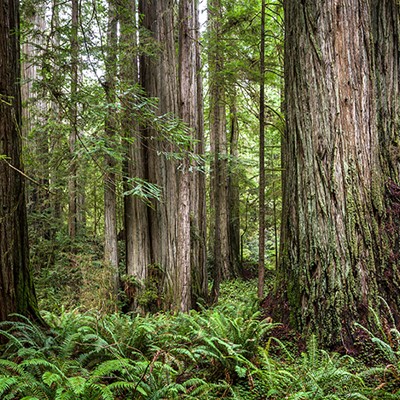 Spurred in large part by social media posts that published the grove's locale, people have trampled a network of paths through the once-pristine understory, even leaving noticeable imprints on the trees as they try to hoist themselves as high up the trunks as possible in pursuit of the ultimate selfie.

"It's become an adventure to go find these amazing, great trees and they think, 'Oh, it's just me doing it," Silver says, noting that "all it takes is someone to geo-tag a photo and the secret's out."

Before-and-after photos dating back just a few years show the tremendous damage these clandestine wanderings have caused, hammering plants like ferns and sorrel, sending sediment into nearby coho and steelhead bearing streams and exposing the shallow roots of the redwoods.

On just one day in October, Silver says he ran into two dozen hikers with all but two searching out the redwood stand — a pursuit he equates to "trophy hunting."

"It's a totally different experience today than it was five to 10 years ago," Silver says.

Now an effort is on to help stem the damage.

While the Titans are some of the oldest and heftiest of the coastal redwoods catalogued to date, Silver notes the trees really aren't signifigantly different from any of the other large old growth easily available for viewing along designated park routes.

In fact, the grove itself is visible from one of the park's main trails.

"People like a mystery, they like a treasure hunt and that's what the Grove of Titans became," Silver says. "Now we have social trails all over the area."

There was no scheme to keep people away from the grove, just the simple reality that the park lacked the proper infrastructure to accommodate people seeking out the trees, so the idea was to try to protect the grove and its surroundings from exactly what has ended up happening.

"We don't want to build a trail to every tree that someone names," Silver says, noting the park would end up with a "freeway of trails and wouldn't be the special place that it is today."

But with numbers of sightseers increasing and the destruction growing, a new plan is underway to protect the grove and give visitors what they so obviously want — an up-close and personal view of the grove.

California State Parks, Save the Redwoods League, the National Park Service and Redwood Parks Conservancy have joined together on a multi-pronged, $3.5 million project that will see a 1,300-foot elevated walkway installed linking the grove to the existing Mill Creek Trail, while also restoring the impacted areas around the grove.

That will allow folks to mix with the trees but — if people stay on the designated trails — protect the last vestiges of this delicate environment that has survived for thousands of years from further destruction.

Included in the effort will be the construction of restroom facilities, ADA access and the addition of trash containers, as well as interpretive signs about the grove's history and ecosystem.

"It's a really comprehensive plan," says Jessica Inwood, Save the Redwoods League parks program manager. "We're not just building a new trail to bring in more people without addressing the other issues."

A major fundraiser is currently underway with Josie Merck, a Bay Area artist and ardent Save the Redwoods League supporter, offering to match up to $500,000 in contributions made by the end of the year to support the effort.

Merck, whose father was a major figure in the league for decades, took up the cause after reading a San Francisco Chronicle story about the plight of the grove, according to the league.

"What we are trying to do now is to get the message out that it's not open at all, it never has been," Inwood says, adding that she does understand the grove's pull but hopes visitors will now better understand the impacts and "realize the more people who go off trail right now, the more work it is to restore it."

During construction, which is slated to begin in the fall, the area will be closed for the public's safety and to allow the work to be completed as quickly as possible.

Silver says the project will ensure that visitors will be able to enjoy the grove "generation after generation and know they are not doing any harm."

He says one of the benefits has been that people who have already visited are beginning to see that they were part of the problem and now they want to be part of the solution.

"We've had people call up and donate who said, 'I was there. I didn't realize I was doing any damage,'" Silver says.