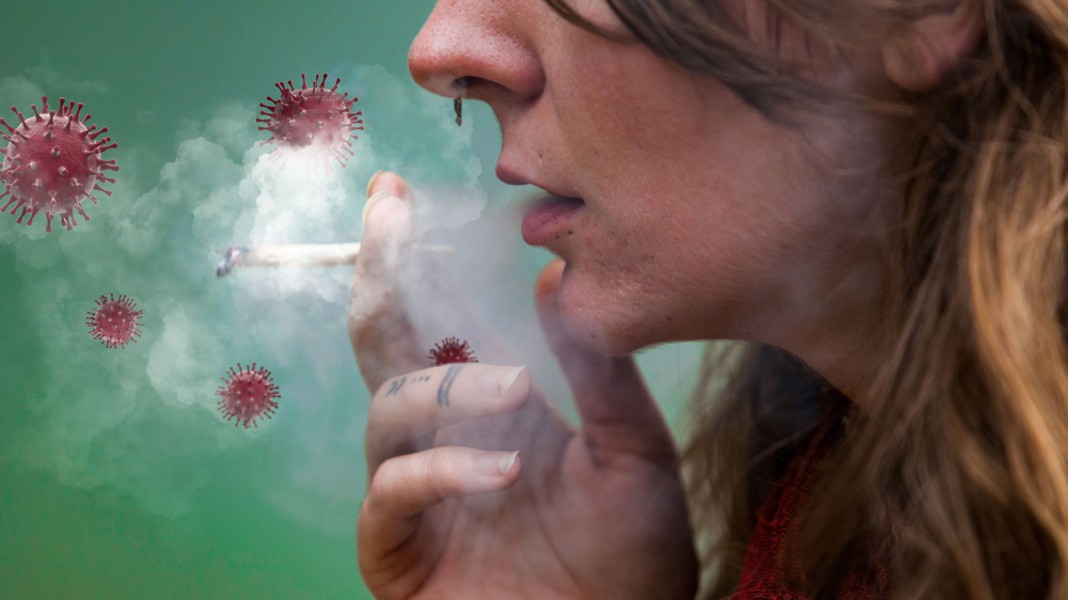 Whatever you do, you cannot pass the dutchie to the left hand side.

People love to get high. And people love to to do it socially. Those are just inescapable facts. When it's time to celebrate, they'll roll one up and pass it around. When the stresses of life come cascading down and it's time to decompress, they'll pass around the bong and let off some steam. It's the same thing that brings droves of patrons into the bar after they got off the clock at work, and we suspect as soon as smoking lounges are permitted and operational, they'll see the same phenomenon.

To a degree that's probably unhealthy, people turn to mind-altering substances to enhance life's highs and dull its lows. But here's the thing: We can't cope with the COVID-19 virus that way — not by going to bars and certainly not by passing around a fatty. It's too dangerous.

Here's why: There's a growing body of evidence on this new virus to suggest that people who are pre-symptomatic (meaning they will get sick but haven't yet despite having the virus and being contagious) and those who are asymptomatic (meaning they have the virus and are contagious but will never display the fever, cough, shortness of breath or runny nose that are its symptoms) are partly responsible for its rapid spread. In Massachusetts, a coronavirus cluster with more than 80 cases was traced back to people believed to have transmitted the virus before showing any symptoms.

Similarly, last week the director of Germany's Institute of Medical Virology Sandra Ciesek tested 24 passengers who had just disembarked a plane from Israel. Seven tested positive, including four who had no symptoms. Perhaps most alarmingly, the four asymptomatic passengers had larger concentrations of the virus in their respiratory secretions, meaning they were actually more contagious than their symptomatic counterparts. Ciesek also published a letter in the New England Journal of Medicine detailing the testing of two passengers returning to Germany from Wuhan, China. One had no symptoms while the other had just a "faint rash" and a mild sore throat. Subsequent lab tests concluded both passengers were shedding the virus.

So yeah, this means that passing a joint around with a group of friends and occasionally coughing all over each other is a terrible idea. But it's actually scarier than that.

Consider that tests have shown the COVID-19 virus can likely live for up to three days on some surfaces if they haven't been disinfected. So that dab rig that your buddy with no symptoms hit two days ago could still be awash in virus. Same goes for that vape pen and pipe. And possibly whatever product you just brought home from the dispensary if your budtender, or even the distributor, is carrying the virus.

The only wise thing to do is to thoroughly disinfect all of your imbibing utensils and the packaging of any products. Then don't share them, hunker down and shelter in place. By all means, puff some weed, if that's your thing. But do it at home.

And if you feel the need for some socialization with your high, that's cool. Have a virtual sesh via a video conferencing app or just go old school and call a friend on the phone. If you want to be high tech about it and Netflix, bake and chill, just sync your shows. Sure, you'll have to shelve the Hacky Sack but maybe that's a good reason to take up Fortnite, Words with Friends or something else you can play remotely. (Best leave Pandemic: The Board Game alone, though. Too real.) Will all this take a bit of getting used to? Probably. But so would watching our community become ravaged by a deadly virus that overwhelms our healthcare system and forever alters our perception of normal.

It's also important for the young, healthy stoners among us to realize that we're all part of a society. The COVID-19 odds chart might not look too daunting from your perspective. But think of your parents, uncles, aunts and grandparents. Think of that friend with diabetes or cancer. Their health now depends on their healthy, able-bodied neighbors making the reasoned, community-minded choices that will slow the spread of this pandemic.

Oh, and in case you're just now getting up to speed, all this shit is, in fact, terrifying. So if you're prone to THC-induced panic attacks or anxiety, best to skip the puff, puff and just pass.