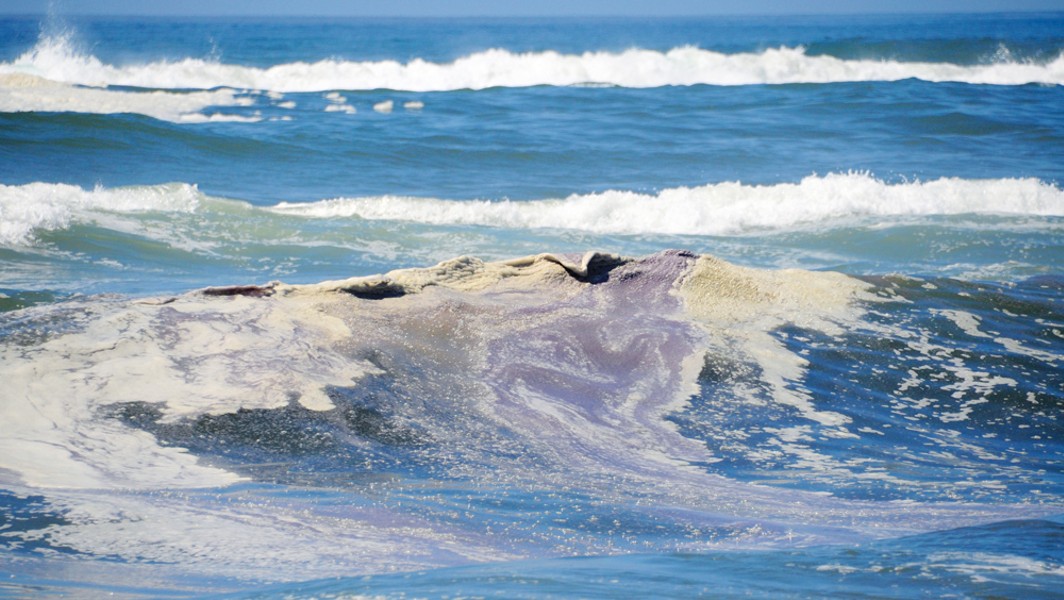 Photo by Mike Kelly Purple-ish scum that might be doliolids.

Purple surf happens. I've seen it only once locally — in July about five years ago. But purple scum on the beach last month could indicate that it had happened again. The phenomenon is caused by a strange, gelatinous, millimeters-long animal called a doliolid. The purple species is Dolioletta gegenbauri. Sorry, but no one has bothered to give it a common name.

Doliolids (D'oh-lee-oh-lids) might seem like jellyfish cousins but they are chordates like us. They normally live offshore where they swim slowly along, filtering plankton through their barrel-shaped bodies. Their swimming is powered by bands of muscle that even look like bands on a whisky barrel. And when the plankton they feed upon is abundant, they reproduce in bizarre ways, both sexually and asexually.

Each adult doliolid has both sperm and eggs, but they release them separately, so eggs are fertilized by other individuals. In its life, the sexually reproducing adult only produces two to six eggs. So how the hell do they explode into purple surf? It's difficult to explain but maybe it'll be easier to understand in human terms.

Let's say you and your honeybunch got "lucky" and just had twins. But because you like doing it doliolid-style, you'd better run away because your babies are about to explode.

Each twin now grows a long stalk out of its backside. Then additional smaller babies spontaneously bud from their little bodies. Each of these new bud babies will live on the stalk but they can't move there by themselves. So your original baby also produces little amoeba-like cell clusters that carry the 100-or-so bud babies to live on the filament.

The bud babies form a colony with some in charge of feeding everyone and the others in charge of making more bud babies. Each of these asexually reproducing individuals on the stalk then produces enough next-generation bud babies that you'll shortly have about 2,000 babies covering the floor. And they're only just getting started.

These 2,000 or so bud babies each bud off another batch of babies at a rate of about 10 per day for a couple of weeks. Therefore, this third generation will soon produce hundreds of thousands of sexually reproducing great-grandchildren. They'll be stacking up fast and will fill all available space in your house. So hopefully you closed the toilet lids and unplugged the garbage disposal before you ran away.

I've done the measurements and it takes 10,000 newborn human babies to fill up a typical furnished 1,500-square-foot ranch-style home. So it will only take a half a day before the ceiling fan is flinging babies in all directions. And in a few more hours, growing babies will burst through the roof and spill out into the streets. And with everyone staying home so much these days, there could be a baby boom coming. Towns all across America would form baby glaciers that would sweep the face of the Earth and reshape the landscape.

Anyway, thanks for donating your twins for this experiment. As you can now see, actual doliolids reproducing like this can create dense localized blooms as long as there's food. And eating all this food sequesters a lot of carbon. So thank the doliolids for helping fight climate change.

To see the purple surf, though, you have to be on the right beach when a doliolid swarm happens to drift in from the high seas. The chances of seeing a swarm are pretty low but your odds of seeing purple surf are probably better than your odds of being buried alive under babies, so keep your eyes open.