Put a Bird on It 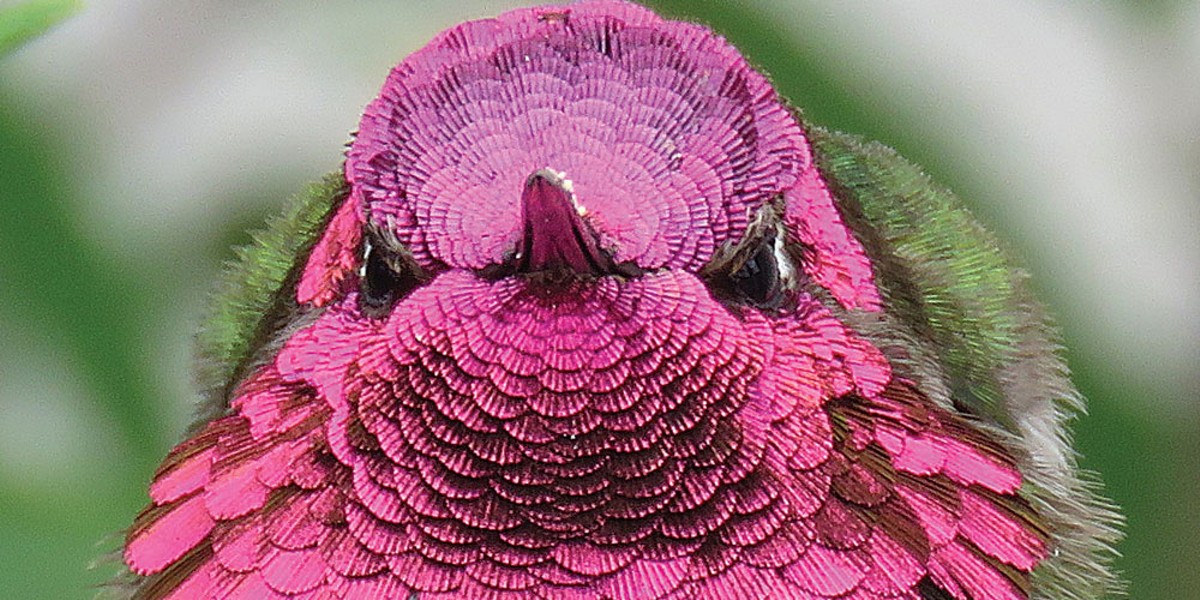 Courtesy of the artist Ken Burton's up-close portrait of an Anna's hummingbird.

Sometimes pictures draw us in for reasons that are hard to explain. The unthinking attraction they induce is sort of like what Liz Lemon on 30 Rock was describing when she said: "I want to go to there." Ken Burton's full-frontal photograph of an Anna's hummingbird is like that. It compels attention, even glimpsed in grainy newsprint reproduction or from across the room.

The picture, part of the exhibition Uncommon Views of Common Arcata Marsh Birds, was taken in extreme close-up. The hummingbird faces the camera head-on and it is quite a sight: eyes and long pipette-like beak appear acutely foreshortened, while the radiating sunburst pattern of the iridescent feathers on the bird's face and throat shows to dazzling advantage. This patch of brilliant feathers, common to many male hummingbirds, is thought to be essential to their courtship display. It is known as a gorget, supposedly because ornithologists thought it resembled the chain-mail swatch protecting an armored knight's throat in battle. But it's hard to imagine even the most cunningly fashioned armor rivaling this Technicolor display. The gorget feathers glint in a distinctively metallic way, shading imperceptibly from rose through fuchsia to violet. The intensity of the color is inversely proportional to the bird's size.

Anna's is a tiny sprite of a bird, "no larger than a ping pong ball and no heavier than a nickel," according to Cornell University's site, www.allaboutbirds.org. Pretty much everything is slow and dull compared to a hummingbird; with wings that can beat more than 50 times per second and a heart rate that can top 1,000 beats per minute, it exists at a speed that defies the full comprehension of more slothful lifeforms like ourselves. In waking life, the bird is rarely still. Here, it fills the frame. We can inspect its gorgeousness at leisure.

Words don't do much to gild this lily. Commendably, Burton provides minimal commentary. When I asked about the circumstances under which the hummingbird picture was taken, his response was brief and factual. "It was visiting a flowering bush and allowing close approach, so I got my camera out," he offered, adding: "You just have to be ready when opportunities present themselves."

Burton, who has been working professionally as an ornithologist and guide since 1987, is a pillar of the regional birding community. A former president of the local Audubon Society chapter, he co-authored the invaluable Humboldt-centric birding manual Common Birds of Northwest California along with Leslie Scopes Anderson in 2013.

On his website, Burton points out that almost 470 bird species have been documented in this county — more than in most states. It is impossible not to admire the serene confidence with which the man states: "At any time of year, it is possible to see over 100 in a day." This is a measure of Burton's diligence and the excellence of his eye, given that most of us could roam the countryside from dawn 'til dusk and come home having conclusively identified little besides egrets, crows and an abundance of the discreet songsters birders call "little brown jobs."

Burton's exhibition at the Arcata Marsh Interpretive Center is small, comprising 10 modestly-sized prints. What information the photographer proffers has mostly, but not exclusively, to do with stats and specs. We learn that Burton has lived and birded, "which for me are pretty much the same thing," in Humboldt since 2005. Most of the photographs were taken with a Canon PowerShot 5450. Some (it's not clear which) were actually shot at the marsh. The Anna's hummingbird portrait may be the show's most immediately striking image but others linger in the mind. Some of these are juxtaposed in productive ways. The decision to pair full-stride action shots of a snowy egret and a rail accentuates the pictures' similarly structured compositions and the birds' extraordinary forms.

The interpretive center has some characteristics that make it a pleasing place in which to look at art. It's airy and high-ceilinged, with a picture window that opens onto a light-drenched view of the marsh. However, there is not much room on the walls and at first it can be difficult to distinguish the photographs from the delightfully heterogenous array of educational material that surrounds them: text panels, terraria, tree branches, birds' nests, plexiglass algae farms and more. The images' clean lines and sharp focus make them stand out, regardless. Might future expansions of the Arcata Marsh Interpretive Center include a dedicated exhibition space? One can hope. For now, viewers will have to imagine how rewarding it might be to see nature photographs of this caliber in a less distracting setting.