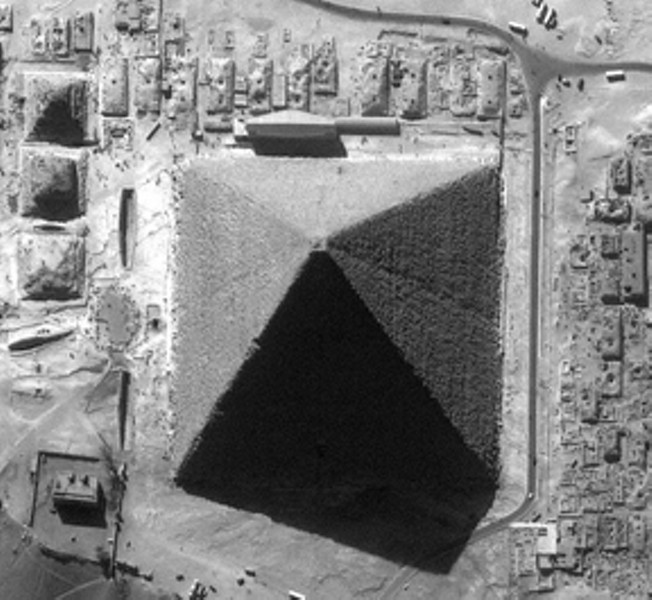 Pyramid of Khufu and the Sphinx. Author photo

Of the 90-odd pyramids in Egypt, not to mention hundreds more in South and Central America, Cyprus, the Sudan, Thailand and Burma, there's only one Great Pyramid. That's because the pyramid of pharaoh Khufu (Greek Cheops) is the biggest. Consisting of over two million blocks and weighing over six million tons, this tomb is simply the single greatest stone structure ever erected. It was completed around 2550 BCE.

One of many controversies surrounding the Great Pyramid is its shape: Was it designed to reflect a particular mathematical constant? Herodotus, touring Egypt 2000 years after construction, suggested that the area of each of the pyramid's four faces equals the height squared. If that was deliberate, then another so-called magic number -- the "golden number" phi -- might have been in the architect's mind. Phi crops up in geometry (pentagons), nature (Fibonacci series), architecture (Parthenon) and art (aspect ratios of many classical paintings). A "phi pyramid" built according to the ratio

Or maybe Cheops is a "pi" pyramid, where the ratio of the base area to the height is equal to pi, giving a side slope of 51.854 degrees. (The closeness results from pi being approximately four divided by the square root of phi.)

Yet another possibility: they simply sloped the faces using the ratio of 11 horizontally to 14 vertically, for a side slope of 51.859 degrees.

Do you see the problem? The three angles are so close, it's impossible to test which is correct. With the original marble sheathing now missing (stripped to build Cairo's mosques and palaces), you can't measure the slope with any confidence. All we can really say is that it's between 51 1/2 and 52 degrees, so the architect probably designed the pyramid according to one of these ratios. We'll never know which.

We can be certain, however, that the unfinished pyramid on the back of your dollar bill -- it's part of the Great Seal -- bears no relationship to pi or phi. The slope, despite its Masonic origins, is a rather unstable 70 degrees.

Barry Evans (barryevans9@yahoo.com) admired the view from the top of the Great Pyramid at dawn 30 years ago.

(2) Pyramid of Khufu and the Sphinx (author photo)