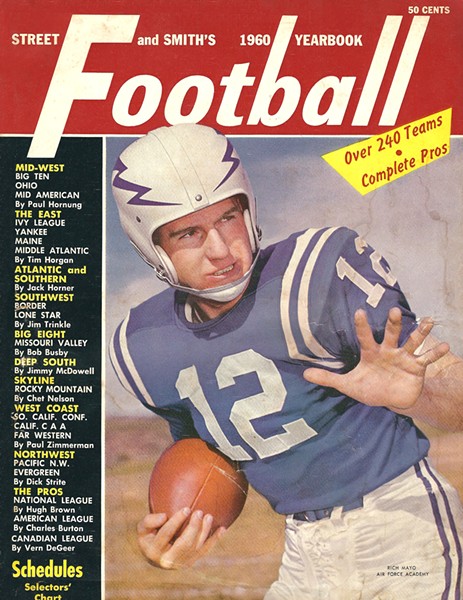 Courtesy of Fred Whitmire Rich Mayo on the cover of the 1960 Football Yearbook in his Air Force Academy uniform.

With the local high school football teams scheduled to begin amid these strange times, it seems like a good time to reflect on a Humboldt County football legend.

Raised on the fringes of Eureka out past Redwood Acres on Bettencourt Ranch, Rich Mayo grew up on a dairy and worked hard as a kid. He grew to love his hometown and throughout his life always wished to move back to Eureka. We may never see another local quarterback as good as Rich Mayo.

Heading to high school in 1950s, Mayo was a natural athlete, as was his stockier older brother by three years Ralph, a top linebacker. By the time Rich got to Eureka High School he was acknowledged as the best athlete in his class, soon to be the best athlete in the county and one of the best local athletes ever. He was a standout in baseball and basketball, but as the football quarterback, he was the leader and star.

Many good quarterbacks have come through the local high schools with names such as Titus, Costello, Spinas, Montana and Brown. Probably the two best were Eureka High School classmates born just month apart — two field generals on one team: Fred Whitmire and Rich Mayo, best friends to this day.

Both coveted the quarterback position for their senior season, 1955-56. Whitmire had played quarterback on the junior varsity team his junior year but had to compete against Mayo his senior year for the starting varsity job. The Loggers had been undefeated the previous year with Mayo as quarterback but he was a little unsure, as Whitmire seemed equally good.

After a few days, Coach Renfro took them aside for some obvious news, they could not both be first string. Whitmire and Mayo were both drop-back passers who could run and think quickly, but the coach thought Mayo was a little better. Renfro finished by telling Whitmire, "Fred, we are moving you to halfback." Later in life, as a coach at College of the Redwoods and Humboldt State University, Whitmire himself had to do the same a few times. Mayo told me as he called the plays himself that season, he never called a play for the halfback pass — he was always afraid of losing his quarterback star status.

The Loggers had one near loss to Medford High School in a game they should have won. The two boys lamented poolside after the game at the motel, talking just past midnight with some Medford girls. They were caught breaking curfew and placed on second string for the following week against Arcata. By game time, the coach changed his mind.

That loss to Medford was the only glitch in an otherwise perfect season. Mayo was offered an academic scholarship to study pre-med at Stanford University and an athletic academic scholarship at the Air Force Academy. He had his heart set on attending Stanford to play football with his teammate Jerry Winters but he would have to walk on to play. He agonized but picked the Air Force Academy in Colorado, which was only in its third year of existence.

He was frustrated after his first year at the Academy, as Buck Shaw, the coach for whom he had hoped to work with at the academy, was now leaving to coach the San Francisco 49ers in their first year. He thought he might not get a chance to play quarterback, the position he was destined for.

The school trainer Jim Conboy, an influential man with the athletes, came and shared some information with him. The academy was hiring new coaches, in particular Ben Martin as the new head coach. He convinced Mayo to stay and that he would have an opportunity to play quarterback. The new coaches took a particular liking to Mayo. They installed him at quarterback and history would be made. Mayo later said, "Martin was a genius."

An article written years later by Irv Moss, a 60-year veteran sportswriter at the Denver Post stated, "If Rich Mayo had followed his emotions after an unhappy first year at the Air Force in 1957, one of college football's most inspirational stories may never had been told." The cadets and active duty personnel — everyone — became football fans.

That year, with Mayo under center, the Air Force Academy Falcons went undefeated earning a spot in the Cotton Bowl by beating the University of Colorado in the last seconds of the last seasonal game. Air Force would face the Texas Christian University Horned Frogs in one of the most anticipated of the bowl games. As the academy had never had a graduating class, it had to get a waiver from the NCAA to finish the paperwork.

In a Sports Illustrated preview of the Cotton Bowl in 1958, the staff wrote "Guile and gumption mark the alarmingly small but enthusiastic Air Force Academy Falcons. Coach Martin's dream team has not the size to overpower the opposition so it must substitute speed and intuitive reactions for heft. This the Falcons have done superbly well under the calculating reckless direction of young Rich Mayo, a 19-year-old quarterback who passes well and reacts to adversity with the aplomb of a born fighter pilot." A few years later, Mayo would command a squadron of fighter pilots.

The Cotton Bowl was a standstill and ended in a 0-0 tie. Air Force had a yardage edge, there were 16 punts and six fumbles lost in the game, but the Air Force's undersized defense held their own, and Mayo, the leader on offense, kept Bob Lilly and the huge TCU defense team on the field. Mayo said, "I think I was coach Martin's kind of quarterback. His game plans were magnificent."

Never again would Air Force have an undefeated season. Mayo would be prominent the next two seasons and would enter the East-West Shrine game at the end of his senior season. Later he'd join the Academic All-American Hall of Fame based on his athletic and academic achievements at the same time as Bill Walton. The same weekend Whitmire was leading Humboldt State University in the Liberty Bowl in Florida for the National Association of Intercollegiate Athletics title.

HSU lost that weekend by one point after Whitmire had led them to 20 straight victories in two seasons. The game was moved to Sacramento the next year and renamed the Camellia Bowl partly due to the racism the six Black players on the HSU team faced in Ft. Lauderdale when they were not allowed to access the team's hotels.

Rich Mayo graduated from the Air Force Academy and became an aviation star, as well. He led squadrons including one with George W. Bush, who he says was a great guy and lot of fun. Many of his classmates went to Vietnam and many died.

After eight years of active duty and a few more flying for the National Guard, Rich Mayo left the military and went to medical school at the University of Texas at Galveston. He worked as a psychiatric doctor in the Houston area the rest of his professional life. He still lives in Texas at the age of 83.

Looking back through his life he feels fortunate for his circumstances. Like so many former athletes, he credits his coaches, in particular Coach Jay Willard. "He was the master of everything athletic. He knew so much, was fun to be around and he was oh, so fair."

Hopefully with the return of sports in the high schools, there will be other stars on the rise that can develop into prominence, but Rich Mayo should never be forgotten.