R is for Rescue

When it comes to an emergency, response time is everything. When someone suffers a sudden cardiac arrest, their chance of survival drops 7 to 10 percent with each minute that passes without medical care, according to the National Center for Biotechnology Information. And, according to the U.S. Department of Homeland Security, it only takes 30 seconds for a small flame to turn into a major house fire that can spread from room to room, filling the home with black smoke or engulfing it in flames within minutes.

To hear Cannon and others around the Arcata Fire District headquarters tell it, that's exactly what's at stake with Measure R on the March 3 ballot. If the measure passes, it will bring in an additional $1.9 million in funding to the financially beleaguered district — which has been operating at a deficit in recent years, depleting its reserves and losing staff. The added revenue will allow the district to continue to fully staff its three stations, which combine to serve some 37,000 residents in Arcata, McKinleyville, Bayside, Manila and Jacoby Creek. But if the measure fails, the district will have to shutter one of its stations and eliminate five firefighter positions.

Sitting in a conference room on the east side of the district's downtown station on a recent Thursday morning, district board member Randy Mendosa says the last thing he wanted was for the district to come to community members with hat in hand. Mendosa retired as Arcata's city manager in 2014 after a career that began with him driving a bus before serving decades as a police officer, later as the city's police chief and, finally, as its city manager. He chuckles recalling how he wound up on the board.

He says he was at a Sunrise Rotary meeting a few years back when Justin McDonald, who'd just recently taken over as the district's fire chief, came to talk to the rotary and said the board — which has five members representing geographical wards — was down a member. McDonald had known Mendosa since he was a kid and Mendosa used to pay him to feed his birds when he went out of town. McDonald says he told Mendosa his house was located in the ward in question and the recently retired city manager couldn't say no.

But he was stepping into an organization undergoing some big changes. In addition to the new chief, a pair of Federal Emergency Management Agency grants had just expired, leaving a hole in the district's budget and officials eying a tax measure.

"I said, 'I'm not going to lend my name to any new tax initiative. I've lived in this town for 40 years. I can't look at my friends and neighbors and support this until I know it's really necessary.'" Mendosa says. "Well, I'm here to look you in the face and say we've shaved every penny but there's a structural deficit. There isn't enough to staff three stations 24 hours a day, seven days a week and 365 days a year."

McDonald leans forward in his seat to Mendosa's right and says the district has cut costs, frozen positions and dipped into reserves to make ends meet. And in the course of the trimming, he says, the district has achieved a new level of transparency, noting that anyone can visit its website to dig through its budgets and audited financial statements, as well as its labor agreements. He adds that in contrast to 2015 when the department looked to expand staffing and shifts, Measure R simply looks to hold the line.

"We're not asking for the world," he says. "We're just asking to keep what we have."

Here's what that looks like: If the measure passes, it will allow the district to keep two firefighters on duty at each of its three stations, as well as one battalion chief to supervise districtwide, 24 hours a day and seven days a week. The district would also be able to restore three frozen firefighter positions and rebuild its reserves to repair or replace trucks and other equipment as needed. (The trucks alone cost upward of $1 million and the district has five fire engines, a water tender and a ladder truck.)

Not everyone is on board. In arguments against Measure R, Kent Sawatzky and Uri Driscoll of the Humboldt County Taxpayers League point out that the district's property tax levy would be far steeper than those seen in Ferndale, Fortuna and Blue Lake.

Instead of staffing three stations, Sawatzky suggests consolidating the district's two Arcata fire stations — one in Mad River and the other downtown just off the plaza — into one "centralized station." Further, he says the district could help organize a countywide fire dispatch that "would likely be much more efficient." They also suggest turning the consolidated station into a "training center," which would allow the district to rely more on trainees and volunteers, which would save taxpayers money.

"The Humboldt County Taxpayers League supports effective law enforcement and fire protection," Sawatzky writes. "The added tax of Measure R is just too much and unjustified."

But Measure R's supporters counter that there are problems with those comparisons and suggestions. First off, they point out that no other jurisdiction is like AFD's, which includes parts of U.S. Highway 101, State Route 299, a U.S. Coast Guard Station, an airport and a university. Next, they note that Ferndale, Blue Lake and even Fortuna are volunteer departments that see a fraction of the calls that come into the Arcata Fire District, which is also the first response to the vast majority of medical calls in its jurisdiction. In 2018, the district responded to 3,357 incidents — a nearly two-fold increase from 12 years earlier — which ranged from alarm activations and car crashes to medical emergencies and fires. (McDonald adds that they also respond to animal welfare calls, like the time they helped get a stuck horse out of the mud or when they saved a crow that had gotten tangled in a wad of fishing line. "We're professional problem solvers with big red toolboxes," Cannon says.)

It's simply not feasible to handle that kind of call volume with a crew of predominantly volunteers, McDonald says.

AFD takes all the volunteers it can get, Cannon says, but they're a rare breed. What many people don't realize is the training requirements are virtually the same for a volunteer as a staff firefighter, and the same Occupational Safety and Health Administration guidelines apply. Whether volunteer or staff, a firefighter needs 300 hours of training before going out in the field, and another 150 if they are going to be certified as an emergency medical technician, which the majority of AFD's firefighters are. Then volunteers need to be willing and able to break away from their day jobs or regular lives at a moment's notice to respond to an emergency. With more and more families depending on dual incomes, this is virtually impossible for the average family.

What has worked, Cannon says, is a volunteer logistics unit. It includes about a dozen people, mostly retired firefighters, who offer support services at fires and other emergency responses. They operate radios, do cleanup work, control traffic, swap out air bottles and handle whatever else is needed.

"It's a way for people to help who don't want to run into burning buildings," Cannon says.

The volunteer side of the organization also contributes in other valuable ways, Mendosa says, explaining that the Arcata Volunteer Fire Department is a certified nonprofit, which owns the downtown station and financed its remodel. It now leases the building back to the district to pay off the loan, which enables the district to exist debt-free.

"There's no debt for the taxpayers of the district," Mendosa says, adding that the nonprofit also brings in donations and grants that a traditional department wouldn't. "It's a huge value for the city and the residents of the district."

And the problem with consolidating stations, McDonald says, is added response times. It can take five-plus minutes for an engine to respond from the Mad River station to a call on the plaza, even longer for something in Manila or Bayside.

Cannon recalls when he and a crew responded from the Mad River station — before the downtown one had re-opened — to a call of a fire at the Northcoast Environmental Center. It took about five and a half minutes to get on scene.

"Well, the environmental center is still an empty lot to this day," Cannon says.

The department recently saw a much different outcome when a generator sparked a fire during the October PG&E Public Safety Power Shutoffs in the back hallway of Big Blue Café, which sits in the line of old buildings that make up the Arcata Plaza's east side. A crew knocked that fire out quickly and, while there was some damage to Big Blue and smoke damage to adjacent businesses, kept it from spreading. Another few minutes in response time and it could have been a very different story, Cannon says, glancing out the department's west-facing window, which overlooks the alley behind that row of buildings.

"If this station wasn't staffed, we'd have a much better view of the plaza here," he says, gesturing toward the window.

McDonald, Mendosa and Cannon seem to know Measure R has an uphill climb. Times are tough economically out there for a lot of people and the measure needs two-thirds of the vote to pass. But they say they also know it's the district's best bet to maintain its level of service into the future. And that means a lot to them. 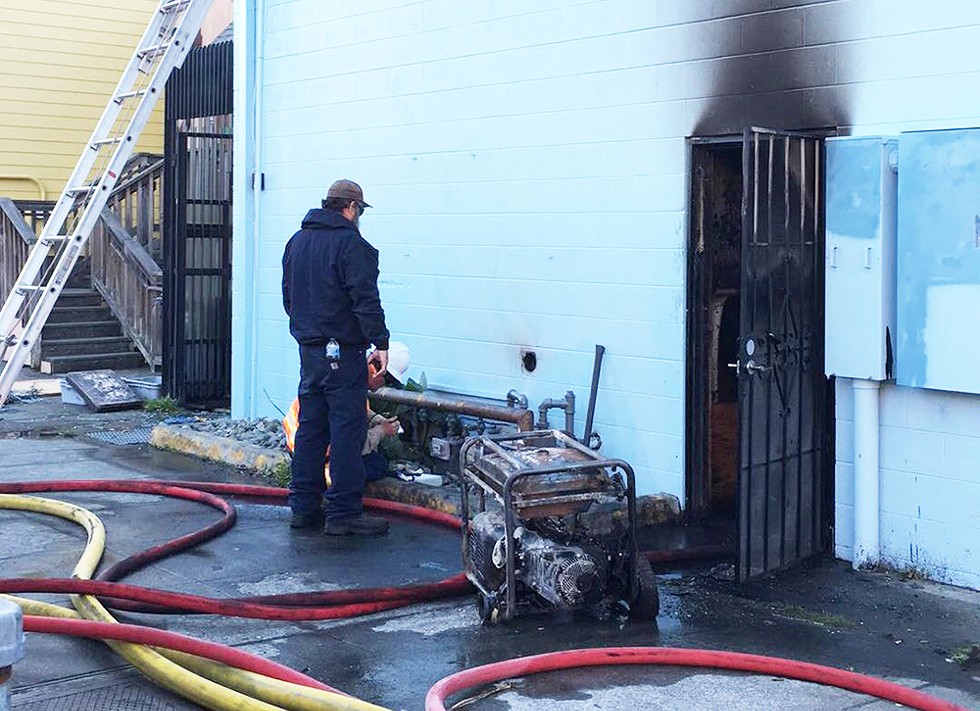 Firefighting can be a brutal job, McDonald says, noting that his firefighters start at $14.76 an hour. The benefits are good but well earned, he says, adding that the job is hard on the body and mind. Firefighters get hurt and have higher cancer and premature death rates than the general population. They also see things nobody should see — in a small town those images sometimes include familiar faces. Instead of watching the Super Bowl with his family, Cannon spent Feb. 2 at two fire scenes. (He jokes that he got paid time and a half for the extra work, as two-and-a-half times nothing is nothing.)

But they also take tremendous pride in the job, knowing that in someone's moment of greatest need, they'll be there to answer the call. They also know that until you're the one making the call, it's hard to recognize the value in it, kind of like that insurance policy you bemoan until it's time to report a loss.

If Measure R fails, McDonald says it will be up to the board to decide the district's next steps but there's simply no way it can stay the course without additional funding, so he would expect some major decisions to be made at the board's March meeting.

Ultimately, McDonald says he just wants district voters to make an informed choice March 3, to know what their vote means and why.

"It's one of the purest forms of local government," he says. "The voters have direct control of the level of service they will receive."

Thadeus Greenson is the Journal's news editor and prefers he/him. Reach him at 442-1400, extension 321, or thad@northcoastjournal.com. Follow him on Twitter @thadeusgreenson.