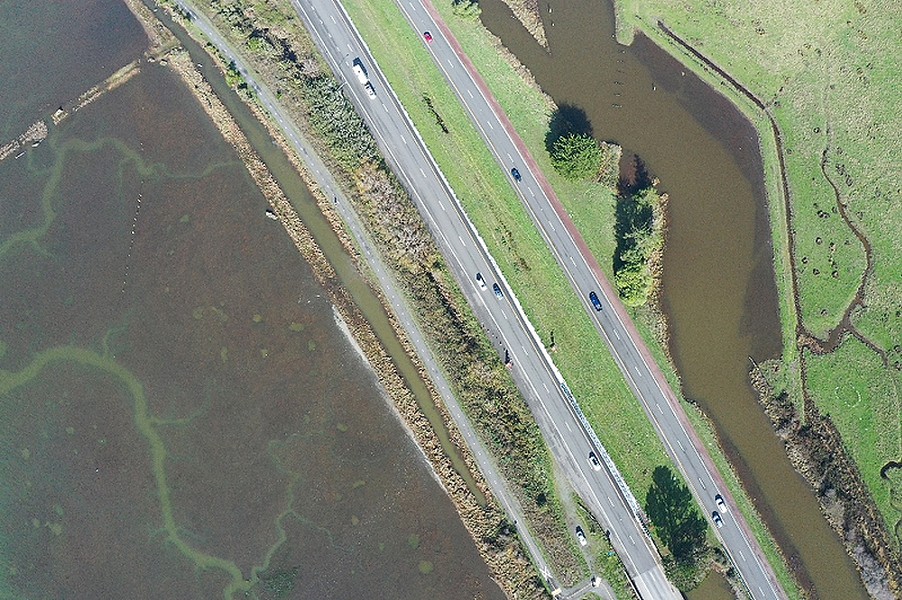 Photo by Mark McKenna An aerial photograph of U.S. Highway 101 between Eureka and Arcata during a recent high tide.

Anyone who has ever driven south on U.S. Highway 101 between Arcata and Eureka during a storm at high tide can't help but notice how close the water comes to the highway. Sea level rise, which scientists assure us is now inevitable, will only make things worse. The only questions are how much worse and when. If and when the ocean covers the 101 corridor between Eureka and Arcata, nobody will be able to say the issue hadn't been on Caltrans' radar. Whether the agency will have actually done anything, however, remains to be seen.

The encroaching waters were the focus of an Oct. 27 public presentation by Caltrans officials. While District 1 Deputy Director Brad Mettam, Climate Change Branch Chief Clancy DeSmet and Project Manager Jeff Pimentel tried their best to put a good spin on the issue, what was largely left unsaid is the realization there may not be enough time, money or scientific knowledge to deal with the looming crisis.

It's hard to overstate the importance of this 6-mile stretch of freeway to Humboldt County lives and livelihoods. It not only sees an average of 41,500 vehicles traverse it daily, according to the Humboldt County Association of Governments, but also serves as a vital shipping corridor and connects vital emergency services.

But while the exigent threat to the roadway that is the North Coast's primary artery is clear, Caltrans' is not known for its ability to get things done quickly. The Willits Bypass, for example, took 40 years to plan and build and the Safety Corridor Improvement Project remains decades in the works. In 2013, Aldaron Laird, of Trinity Associates, published a comprehensive analysis of how the rising seas would impact Humboldt Bay and, in a 2015 white paper, warned low-lying sections of the freeway could be inundated by 2050. Yet the first comprehensive plan for dealing with the corridor is not due until December of 2025 — four years from now and five years earlier than Caltrans had initially proposed when seeking California Coastal Commission approval for the project. But by then, the ocean, which already has reached the freeway once, during a storm in 2005, will have already risen about a foot from its initial measurements made by Laird in 2015.

And just because a plan has been put on paper does not mean that the agency is anywhere close to actually building the project, whether it is a renovated salt marsh or a raised causeway. The first stage of planning is theoretical and deals with issues such as whether the expected benefits come anywhere close to the costs involved in building the project, or how difficult it might be to get approval from the various regulatory agencies. Many alternatives are briefly examined and then thrown in the round file.

Hank Seemann, deputy director of environmental services for the Humboldt County Public Works Department, explained the intricate process of planning a workable project. Although the county does not own or operate the freeway — that is Caltrans' domain — it is responsible for several miles of adjacent land that are equally vulnerable to sea level rise. The two agencies will need to work closely together to find solutions that benefit both.

Once a project has been deemed acceptable, the engineers get to work, calculating what will need to be done, the best way to do it and how much it will cost. Also, the environmental impacts must be studied. The shoreline of Humboldt Bay is home to many rare and endangered species of animals and plants, explained Bob Merrill, the North Coast District manager of the California Coastal Commission, and although an ideal project would improve their ability to thrive, at the very least, it must not worsen conditions for them. Also, many projects that at first glance seem harmless enough actually interfere with ocean currents, resulting in loss of sand and silt that can result in shoreline erosion, worsening the very problem they were trying to solve.

At present, "natural living shorelines" are the solution favored by the state. Before humans interfered with the coastline by building levees and draining marshes, a series of natural "benches" existed just beyond the shoreline.

In an undisturbed area, at low tide, looking out at the bay, you can see mudflats, which gradually rise into salt marshes, which, in turn, rise into fresh water marshes and then become the dry uplands. These natural benches break the force of waves traveling across the bay, while also supporting myriad life forms.

Without the mudflats and marshes, the waves crash directly onto the land. In the case of the corridor, they hit the railroad prism and erode it. If you walk or bike along the bay, you can see that the places where the earth under the railroad tracks has eroded are the same places where the marshlands have disappeared.

Seemann explained that the "natural living shoreline" concept is new to most engineers. Every engineering department has handbooks that explain in great detail how to build a levee or repair a culvert. But throw biology into the mix and the picture changes. A different set of experts is needed, and this adds to the cost and complexity of the project.

Once the experts have been consulted and the design created, the permits from various regulatory agencies must be sought, and this can be a long, involved process. For example, an endangered plant may only be recognizable while in bloom, which may be only for a few weeks during a certain time of year. Because project planners must know exactly where an endangered plant grows and prove their project will not harm it, an environmental review in areas where the plant grows can take close to a year to complete. The same is true for some species of nesting birds.

Once permits are obtained, a project must be funded. State and federal money may or may not be available, and is usually allocated years in advance. During the Caltrans presentation, a member of the audience pointed out that if Long Beach or San Diego were competing for the same pot of money as Humboldt, rural Humboldt would likely lose out.

But once all these hurdles are passed, actual construction can begin, which can take five to 10 additional years, depending on the complexity of the project.

Caltrans is well aware of the crushing demands on its time, funding and expertise that saving the corridor will require. But the project is also wrought with complexities.

"The 6-mile stretch of highway between Eureka and Arcata, also known as the 'EPA Corridor,' has many things to consider: utility lines, numerous property owners, dikes and levees and tide gates," said DeSmet.

To make the matter even more complicated, Caltrans must work with a variety of private land owners and utilities that own adjacent properties, as well as the two neighboring cities and the county. Murray Field Airport is located on a peninsula surrounded by the Eureka Slough and could be impacted by any Caltrans projects that increase water on the east (landward) side of the freeway.

"Approximately 75 percent of our facility is protected by somebody else's tide gates, dikes or levees," DeSmet said.

In 2019, the California Coastal Commission gave Caltrans permission to construct five short-term projects aimed to improve the highway, with the understanding it would also develop a comprehensive resiliency plan by 2025. Whether or not all five of these projects improve the road's resilience to flooding is questionable. The best known of these projects is the Indianola Undercrossing and Half Signal, which will tame the hair-raising Indianola cutoff that has caused numerous accidents and fatalities over the years. While few people doubt this will be a safety improvement, people have questioned how exactly how it will make the road more resilient to rising seas. One wisecracking commenter noted that the overpass might turn into an island.

Other safety improvement projects include: several acceleration and deceleration lanes for entering and leaving the freeway at Mid-City Motors, the Bayside Cutoff and the California Redwood Co.; replacing antiquated tide gates; inserting a cable median barrier, presumably to keep people from making ill-advised U-turns across the freeway; and, as anyone who has traveled south from Arcata in recent months knows, replacing the bridges at Gannon Slough and Jacoby Creek. These bridges are being constructed so they can be raised if necessitated by rising seas, Pimentel said.

Finally, Caltrans plans' must account for the completion of the Humboldt Bay Trail along the bay side of the roadway. The northern half, done by the city of Arcata, has already been completed; the southern half, done by the county, is still in its planning phases. In addition to encouraging walking and biking, which do not increase greenhouse gases, the trails will themselves act as levees, providing additional protection to the roadways.

One solution unlikely to be considered is moving the freeway inland. The only available route would be the Old Arcata Road, which would result in displacing a large population and violating Caltrans' policies on equity — avoiding harm to low-income populations.

Another seemingly unlikely solution is turning the entire 6-mile corridor into a raised causeway, which would cost hundreds of millions of dollars.

There's a certain irony in the daunting challenges facing Caltrans, which DeSmet hinted he understands.

Caltrans officials are already feeling uncomfortably pressed for time. Merrill observed that the agency was unhappy with the five-year deadline that the Coastal Commission required for approval of its comprehensive plan — Caltrans had wanted 10 years.

But when the safety project came before the California Coastal Commission in 2019, some commissioners expressed dismay that it didn't more explicitly plan for sea level rise and they deemed the 10-year timeline for an adaptation plan out of touch with the reality of the situation.

"This is ground zero," chair Dayna Bochco said during the meeting. "We don't have a lot of time right here. The traffic is a terrible problem. The water is going to be a worse one."

“This is ground zero. ... We don’t have a lot of time right here. The traffic is a terrible problem. The water is going to be a worse one.” tweet this

The commission ultimately supported the project but reluctantly. Coastal Commission Executive Director Jack Ainsworth summed up the discussion with a tone of urgency.

"We need to stress to the powers that be in Sacramento that this is no longer a slow-moving emergency," Ainsworth said. "This is ground zero. We need something like a Marshall Plan. We need to get money for planning, for design and engineering projects. And that's going to take a huge amount of resources."

Two years later, the urgency remains but the cavalry of resources has yet to arrive. The clock is steadily ticking down on Caltrans' timeline to finish its adaptation plan by 2024, and there's the threat the clock could be sped up at any time. Under the Coastal Commission's approval, if the freeway floods four times in any one 12-month period, the plan's deadline accelerates to 2023. But planning is just the first step in a long road. The sea, meanwhile, keeps rising.

Laird says the Ocean Protection Council's 2018 sea level rise projections indicate planners should expect the waters along the U.S. Highway 101 safety corridor to rise a foot by 2030, 1.6 feet by 2040, 2.3 feet by 2050 and 3.1 feet by 2060. Some believe those projections are already outdated. The lowest point on the southbound lane of U.S. Highway 101, meanwhile, sits about 2 feet above peak high tide levels.

Regular commuters, it seems, might want to consider buying a boat.