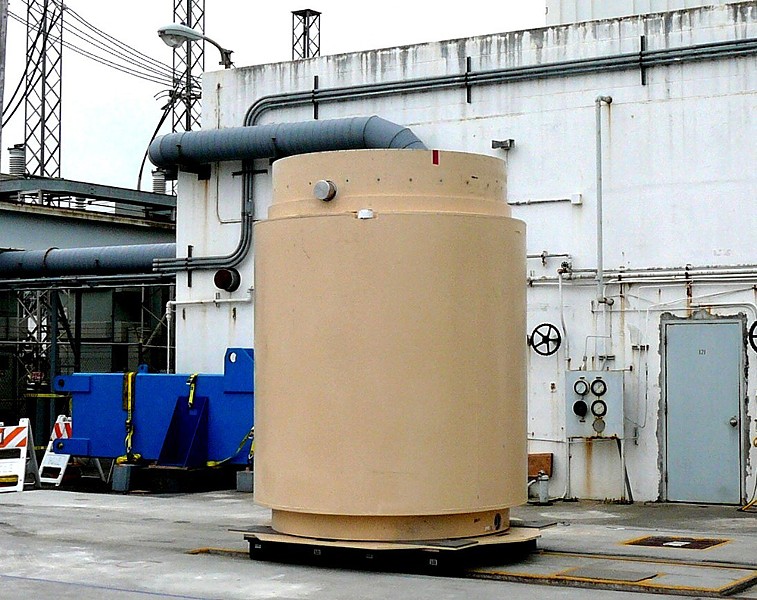 Need something to add to your worry list? Something in addition to global warming, sea level rise, wildfires, war, social injustice, the next tsunami and that long-expected mega-earthquake? How about the six casks of nuclear waste stored at the Humboldt Bay Power Plant?

Staff members of the Nuclear Regulatory Commission — at least those well-spoken gentlemen who hosted a public meeting on Aug. 26 at the Wharfinger Building — would assure you that the nuclear waste should be very far down on that worry list. But some members of the public would tell you otherwise. That clash of viewpoints made for a very interesting two hours.

The original purpose of the meeting was to satisfy some pro forma requirement for public interaction, a necessary task to check a box on a bureaucratic to-do list. However, not a half hour in, some very concerned folks had seized control of the agenda and were letting the NRC and the PG&E public relations officer know exactly what they thought — and feared — about the legacy of Humboldt's experiment with nuclear energy.

In the 1950s, atomic energy was touted as the solution to all America's energy needs. In 1960, PG&E began construction of a nuclear power plant next to its existing conventional power plant at King Salmon. It went on line in 1962 at a cost of $33 million. Fifteen years later, PG&E took the plant off line, estimating at that time the cost of decommissioning would be $382 million. Fortunately, rate-payers had been contributing to this fund each month as we paid our monthly power bills. Apparently, we will continue to be paying for quite some time, as the final cost of decommissioning is now estimated at more than $1 billion.

When the plant was designed, somehow PG&E's engineers failed to notice the earthquake fault right below the installation. And retrofitting a functioning nuclear plant is a lot harder than retrofitting a Victorian mansion or even a freeway overpass — you have all those intensely hot, radioactive fuel rods that can't be exposed to the open air to deal with — and PG&E decided it was better to simply shut the darn thing down.

Just in case you slept through the high school science class about nuclear energy, the ultra-short version is that rods of enriched uranium zap out unwanted neutrons from the nuclei of their atoms. They also emit heat at the same time, which boils water, which turns turbines to generate electricity. The neutrons, however, zap other uranium rods and the process continues. If left unfettered, you would eventually build up to a nuclear explosion, which was, of course, the original use for atomic energy. But by inserting neutron-absorbing materials like boron into the reactor, the process is maintained at just the right level — strong enough to keep going and emit lots of heat but not strong enough to explode.

Taking all of this apart is tricky, to say the least. It helps if you wait until the fuel rods naturally run out of juice — or neutrons — which they eventually do, although not all at once. Some, in fact, can be quite long-lived. But even if the plant had continued running, sooner or later PG&E would have had to swap out the old rods and replace them with new ones. Since the old rods are still radioactive — just not radioactive enough to keep the plant running — they have to be isolated in a safe area, such as a 40-foot pool of water. So at a convenient time decades ago, PG&E put the fuel rods in the pool and the nuclear plant went dark.

The next step was to wait. Several years, in fact, while the rods cooled to a point where robots could handle them. In the meantime, the utility company dismantled the less hazardous portions of the plant, chopping them up and shipping them away to hazardous waste dumps throughout the nation.

It turns out, however, that Uncle Sam had pulled a fast one on the utility companies. Despite the federal government's pledge that a giant nuclear waste dump would be opened somewhere, maybe in the heart of a desert mountain, no such facility was ever opened, likely because no state would agree to house it. So the feds gave the utility companies the bad news — they were going to have to store all the real bad waste onsite until ... until, well, who knows. And with the half-life of plutonium, one of the by-products of nuclear reactors, spanning 24,000 years, those companies better be prepared to hang onto that waste for awhile.

The NRC and PG&E decided that it would be safest to store the spent fuel rods in dry casks, lined with radiation-absorbing material, which would then be encased in concrete.

By the end of this year, PG&E is supposed to have wrapped up all its decommissioning tasks. The exterior of the plant has been largely removed and some wetlands remediated. New conventionally-powered gas burning plants have been built nearby to supply Humboldt with energy. But six casks of nuclear waste remain onsite and will stay there.

"There is no feasible plan to bury the casks at this time," former decommissioning community advisory board member Mike Manetas, who also taught classes at Humboldt State University and College of the Redwoods on decommissioning nuclear plants, said in an email to the Journal. "Our six casks will remain in the concrete bunker on Buhne Point where the decommissioned nuke sat. That is 45 feet above sea level and the bunker is bermed about 30 feet into the ground. They may eventually be under sea level with climate change."

The storage of nuclear waste costs money but there is a trust fund operated by a commercial finance company and supervised by the California Public Utilities Commission, according to PG&E Nuclear Plant Manager Loren Sharp, who added there is enough money in the fund to last another 30 years. PG&E, you may recall, has filed for bankruptcy protection but Sharp told the Journal that's no reason to worry, pointing out the company doesn't have control over the trust fund, anyway.

Years ago, Congress ordered nuclear licensees, such as PG&E, to keep communicating with the public — through Community Advisory Boards, commonly known as CABs. Humboldt had its very own CAB made of a respectable group of community leaders that included, along with the school principals and county supervisors (and Manetas), some long-time, anti-nuclear activists. The purpose of the Aug. 26 meeting was to be limited to discussing the purpose of the CAB and to decide whether it should continue after the end of the year, when PG&E is supposed to hand over one of its licenses to the NRC. The audience, however, was much more interested in discussing the potential dangers of the nuclear waste that still remains onsite.

About 20 people spoke over the course of two hours, addressing an audience of about 75 people in the Wharfinger Building. Several complained that little public notification had been given for the meeting.

While many speakers said PG&E had been a responsible partner and done its best to answer questions, nearly all emphasized the dangers of leaving the waste onsite. At points during public comment, the audience broke into applause.

Manetas remarked that the cost of decommissioning had swelled from an initial estimate of $95 million to more than $1 billion but the problem of storing spent nuclear fuel was still nowhere near solved.

"As the blue ribbon panel that President Obama cited [said], 'There is no solution to high level radioactive waste,'" he said.

Jennifer Kalt, a CAB member who is also the director of Humboldt Baykeeper, an environmental organization, pointed out that Buhne Point, where the nuclear plant is located, is "ground zero" of rising sea levels in Humboldt Bay because the ground underneath the bay is sinking, even as the ocean is rising. The bluff on which the plant sits has eroded 1,500 feet since 1870, she said.

"What we have to worry about is major earthquakes and sea level rise," said CAB member Dave Meserve, a former Arcata city councilmember. "It won't bother us in our lifetimes but it is going to be an issue in the future."

First District County Supervisor Rex Bohn, who is also a CAB member, said he had been a vendor for the nuclear plant and worked for a contractor at the plant. He said his questions were always answered. He worried, however, about what might happen if the casks had to be moved to a different site.

Fifth District Supervisor Steve Madrone said he is also worried, mentioning sea level rise, tsunamis, wave-action erosion at Buhne Point and a 1970 accident he said resulted in the release of radiation into the surrounding communities.

As the evening progressed, the agitation level of the audience rose noticeably. Scott Rainsford, who was a U.S. Coast Guard meteorologist in 1978, discussed his review of the nuclear plant's operator log, which covered the accident that Madrone mentioned. Rainsford said there were subsequently several conflicting versions of the event and nobody knows how much radiation was actually released.

Other speakers said the public had been sold a bill of goods, described the plant as "the next Fukishima" and the waste canisters as "Chernobyl in a can," and accused the agencies of "bullshit and obfuscation." The high cost of decommissioning was mentioned by several speakers.

Aldaron Laird, the environmental planner who has studied the future effects of sea level rise on Humboldt Bay, noted that the seawall protecting Buhne Point will be permanently underwater by 2090. The facility itself will be periodically inundated by king tides as early as 2060, he said.

Maybe by then somebody will have figured out how to solve this mess.

To send comments about the meeting and the situation in general to the NRC, visit www.feedback.nrc.gov/pmfs/feedback/form?meetingcode=20190859.

Editor's note: This story has been updated to correct Loren Sharp's title and the spelling of his name. The Journal regrets the error.