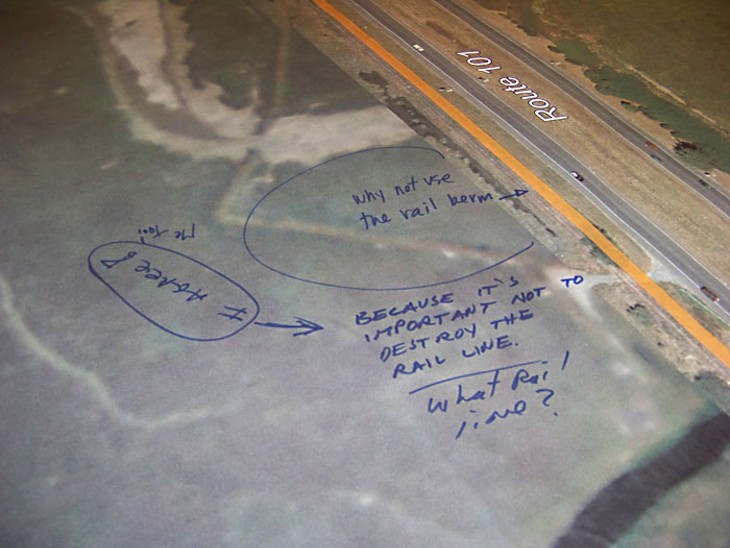 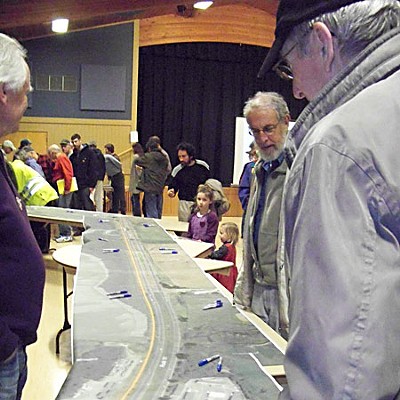 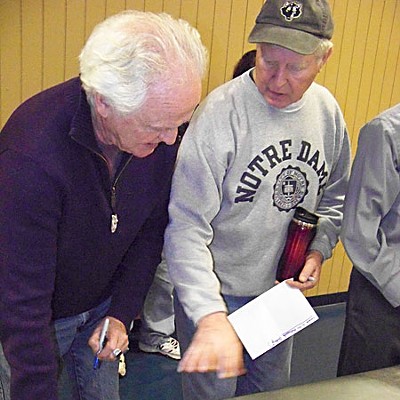 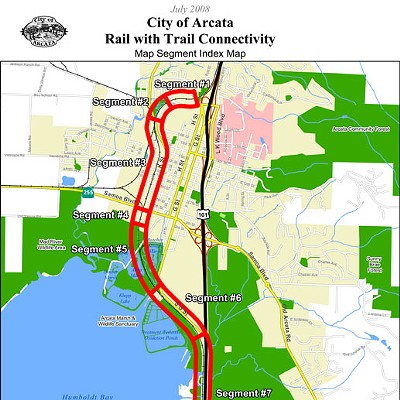 The overt rancor that's been known to occur between train enthusiasts and trail advocates seems to have been put on simmer of late, as the City of Arcata leads the way with a multi-stakeholder, collaboratively conceived plan for an initial trail-with-rail project.

The project would be to build a trail that mostly follows the rail corridor from the skate park area on Sunset Avenue to the Bracut turnoff on Highway 101 between Arcata and Eureka. The nearly 4-mile segment of trail might deviate from the rail corridor in places -- for example, through the Arcata Marsh where existing trails could be beefed up for use -- and in some places it might be a tight squeeze to fit both a trail and the rails (like over bridges). But Karen Diemer, deputy director of the City of Arcata's Environmental Services Department, said by phone last week that none of the options the planners are looking at would require removal of any rail.

The city got a $1.07 million grant from the California Coastal Conservancy to plan and design the trail, and has until June 30 to complete the studies. So far the city has $550,000 of that money under contract with consultants Winzler and Kelly, Alta Planning and PlanWest Partners.

Last week the city and consultants put on a presentation at the D Street Neighborhood Center in Arcata to share their progress with the public. After the presentation, people wandered along the string of overlaid maps set on tables that showed the trail's projected route and possible alignments. The maps showed the trail going from the Skate Park on Sunset Avenue to K Street, down along K to Samoa, across Samoa and along I to the marsh, through the marsh and out South G to Highway 101 and along 101 on the west side to Bracut.

Blue pens were laid out on the tables and, side by side, rail and trail advocates amicably wrote down their dreams, concerns and demands. Members of the Timber Heritage Association, who want to see a tourist train running between Samoa and the cities along the bay, were there, penning in the places along the proposed trail where they'd like to see train stations put in. Trail users were there, noting where they'd like to see pedestrian/bike bridges and such put in for safe crossings. For the most part, train advocates seemed happy they'd get to keep their rails and generous toward the trail. And trail advocates -- well, they seemed happy to have a trail in the works, if a little resigned to the rails. And everyone seemed concerned about safety.

At one end of the chain of tables, Gordon Inkeles peered down at the south end of the trail, at where it would end abruptly at Bracut (there are no specific plans yet for extending the trail all the way to Eureka).

"Is there a way to get across 101 here?" Inkeles wondered aloud. "Because I would ride it every day if I could get across the highway. I live in Bayside."

Inkeles said he rides to Arcata frequently during the week, and on weekends he meets up with his cycling group, the Latte Warriors, to ride to Trinidad. They ride the Hammond Trail part of the way, and likely would ride at least some of the new section of trail if and when it's built. He usually takes the Old Arcata Road, now, he said, to get to Arcata or Eureka.

Rondal Snodgrass, looking down at the same spot on the map where the trail would end at Bracut, agreed he was worried about what trail users would do at that point. He saw an opportunity there for something special, and showy. "I want a bridge there that's beautifully designed," he said. "It could be phenomenal."

The two men talked about the notion of a train revival. "I think the tourist train, or a train for commercial freight, is just economically impossible in today's economy," Snodgrass said. "It's a beautiful idea, but...." He noted the decline and bankruptcy of tourist trains elsewhere in the region. "But this is a great leap forward," he added.

Further down the route, Dennis Cahill bent over the map and wrote near the Bayside Cutoff, "We need an underpass like at Indianola [where Caltrans proposes an interchange]."

"I'm a trail person and a rail person," Cahill said. "I've been in Bayside 40 years, and I remember on the Fourth of July they used to have a train that went from Arcata to Eureka and back. We'd take our kids on it. It was beautiful. And I think tourism is important. We could be taking people to see our history, like the Samoa Cookhouse. I don't want to get rid of the rails."

Brett Gronemeyer, director of planning for the Humboldt Bay Bicycle Commuters Association, said it'd be great to have passenger rail someday, although he didn't see much future in freight. Meanwhile, he looked forward to someday transferring his bike commute between Eureka and Arcata from the highway to the trail by the bay.

"That trail versus rail deadlock we were in, this is a way to move forward," Gronemeyer said.

Marcus Brown, president of the Timber Heritage Museum which is working on getting a tourist train going, seemed pleased as well. "Arcata's plan really does try to not remove any train tracks," he said.

In an interview before the presentation, Diemer said the city hopes the rail-with-trail project will be a model for future such trails. But first, the city has to round up the cash to actually build it. Diemer said she wouldn't have an estimate of what it will cost to construct the trail until May. And perhaps by 2011 construction would begin.