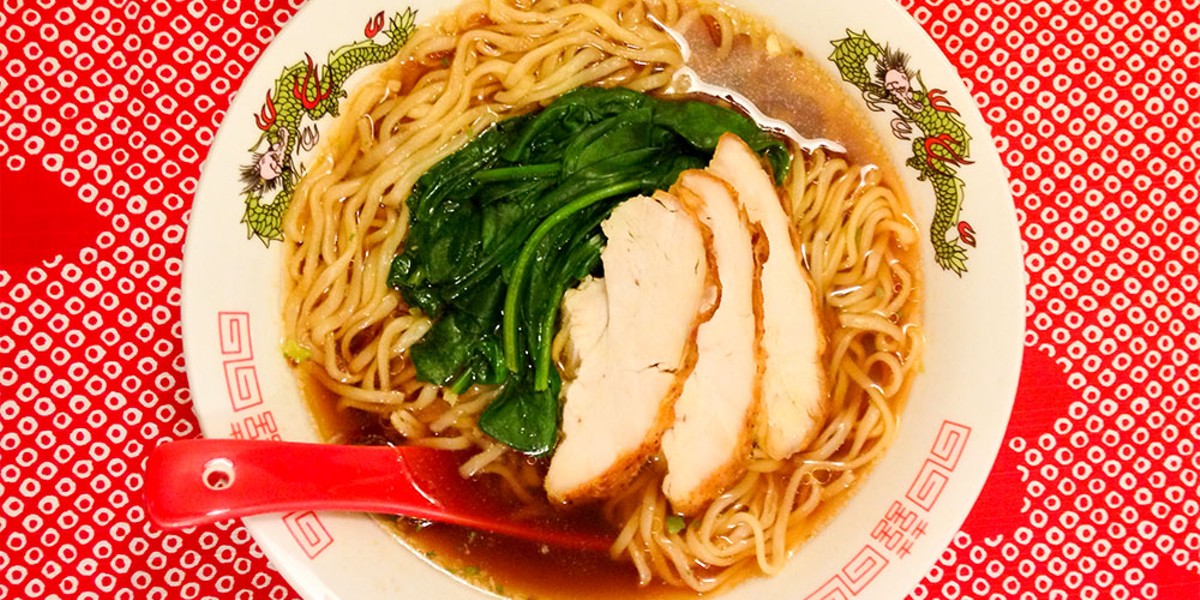 Photo by Jennifer Fumiko Cahill The champion with a little garnish, because we're not animals.

Photo by Drew Hyland 10. Goku Uma, Soy Sauce Flavor, $2.49. The bits of cabbage reconstituted well, but neither the overly salty soup nor the thicker, doughy noodles fared well. Still a step up from Top Ramen, but save it for stocking the bunker. SCORE: 5.6

Photo by Drew Hyland 8. Charumera Soy Sauce Flavor, $1.39. With its simple, earthy soup and thin, chewy noodles, this vintage brand charmed a few, but others found the flavor "like cardboard." SCORE: 6.2

Photo by Drew Hyland 7 Menraku Japanese Ramen, Soy Sauce, $2.49. The dark soy soup flecked with scallions and springy noodles won it a "solidly OK" and a place on the grocery list, even on pay day. SCORE: 7

Photo by Drew Hyland 5. Nongshim Bowl Noodle, Kimchi, $1.39. This spicy number was the hottest contender, which took it out of running for at least one tester. The substantial noodles were enjoyed, and the salty red pepper broth was deemed great for a cold. SCORE: 7.93

Photo by Drew Hyland 4. Myojo Creamy Tonkotsu, $2.99. The rich, milky seafood soup was deemed "weird but good," as were the udon-like noodles, though they stuck together and broke upon stirring. Tasters decided this dark horse was worth the splurge. SCORE: 8

Photo by Drew Hyland 3. Sapporo Ichiban – Original Flavor, $0.89. Who knew? Closest to old-school Top Ramen in texture but with a flavor upgrade, the fat, curly noodles absorb the salty goodness. No reason to wait for the end of the month. Use a fancy bowl. SCORE: 8.83

Photo by Drew Hyland 2. Nongshim Shin Bowl, $1.49. One tester prematurely proclaimed, "Winner, winner, ramen dinner!" The classic Korean standard has thick, soft noodles like Sapporo but its red-hot broth has oomph and umami to spare. Appealing even if you have a 401k. SCORE: 9.25

Photo by Drew Hyland 1. Myojo Chukazanmai, $2.19. The extra packet of sesame oil and concentrated soup base are everything, adding aroma, body and an appealing sheen. The wavy, golden egg noodles are dry rather than fried, for a stretchy, al dente bite that comes closest to the real deal you had in San Francisco that time. Treat yourself. SCORE: 9.6

Before I went to college, I had no idea white people ate ramen. In my hometown in upstate New York, noodles were too exotic. If you were broke, you ate spaghetti with sauce from a jar, potatoes or bologna sandwiches. Ramen was either the dreamy bowl we traveled to sigh over in a restaurant or the crinkly NASA packet of instant noodles we boiled, strained and dressed with an egg, cooked spinach, scallions and sliced meat. Just like the picture.

Since first recoiling at the sight of a classmate slicing a hot dog into a cloudy pot of Top Ramen, I've come to appreciate its virtues beyond my family's version. For most, ramen is the staple of the strapped, a 29-cent meal that fills the belly and (with the magic of MSG) hits all the flavor notes, hammering on the salt and umami with its soft, fatty, comforting coils and brown broth. It allows the young and improvident, yet unburdened by thoughts of nutrition and mortality, to put more in the beer budget than the vegetable crisper. It takes but a few minutes to boil, mix and eat over the sink straight from the pot, making room in the student's schedule for other things — sometimes even studying.

And — even if you've subsisted on shrink-wrapped cases of chicken, beef, shrimp or Oriental (what the hell is Oriental flavor exactly?) until in a moment of financial frustration you shook your fist and swore to the skies, like Scarlett O'Hara, that you'd never eat instant ramen again — it still kind of tastes good.

In fact, if you're prepared to splash out, say, anywhere from a buck to a high-rolling $2.99 a package, it tastes even better. We went to Little Japan Market (2848 F St., Eureka), where shelf after shelf of instant noodle options — udon, soba, cellophane — threaten to overwhelm, and dug our chopsticks into 10 contenders in the ramen category, sticking to the basic soy sauce-based soup with a tonkotsu bone broth, as well as a couple of popular Korean kimchi wild cards. We sipped, slurped and scored each entry on soup flavor, quality of noodles and whether or not we would eat them outside of a poverty scenario for an overall 10-point scale. Finally, once the salt swelling and the MSG hallucinations receded, we changed out of our splattered shirts and tallied up the numbers for the ranking here.

A couple of pro tips: With packaged noodles, straining and rinsing the noodles makes a difference, as does whipping up the soup separately. And if you're eating at the office but don't want the guilt and shame of Styrofoam, stick to the paper bowls or invest $3.49 in the microwaveable noodle bowl and lid to cook your favorite flat-package variety in about three minutes. Maybe toss on a handful of mung bean sprouts so your mother won't worry. And don't eat over the sink. OK, now we're kind of judging.