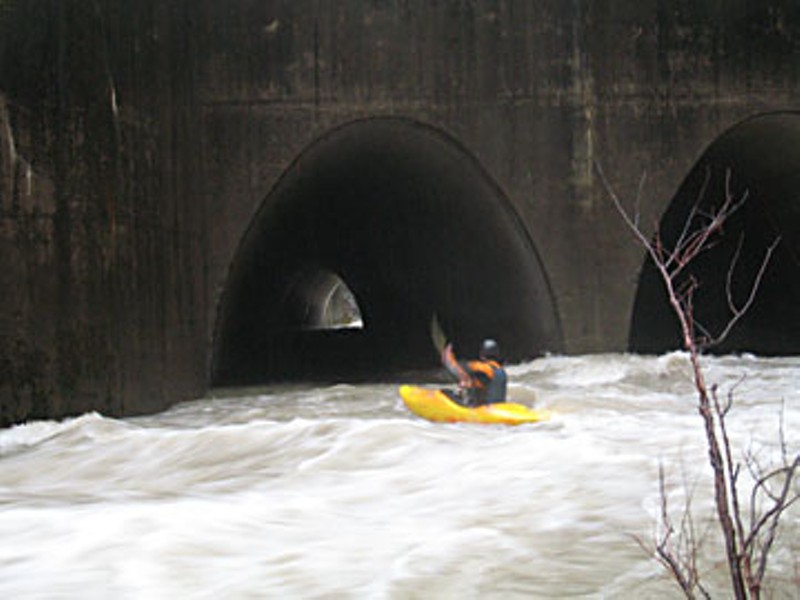 S o there we were, drinking beer in a stinky little white car at 11:30 on a Sunday morning, thinking about kayaking 15.8 miles down Ten Mile Creek into the South Fork Eel River. The rain pounded. We were in downtown Garberville waiting on our friend Ed, who was trying to get gas. The power was out in town and the gas pumps weren't working, so to find gas he had to drive back to Miranda, 10 miles in the opposite direction.

The day had started at Damon's house, where I met Leif — a big dude measuring in at 6 feet 7 inches, with a big mullet to match. He studies physics at Colorado State, and when I asked what his focus was, he stated, simply, "chaos." A brief period of silence followed. After we cleaned some of the trash out of Leif's car and loaded up our gear, the three of us headed south. We met Ed, a man of very few words, in Redcrest. He's somewhat of an enigma, known to paddle difficult rivers solo and yielding nothing more than a simple nod upon seeing other paddlers.

After a half an hour or so of waiting, I said, "Well, it's 11:30, we still have an hour or more to drive plus the shuttle run, Ed's probably sitting in a long line for gas in Miranda, this car stinks, and it's raining really hard, what should we do?" Damon, always amped, said "I say we crack into those PBR's!" So we started drinking. The situation was rapidly deteriorating. After Damon picked up the guide book and read aloud the account of four friends that paddled Ten Mile Creek together — a trip that involved multiple swims, lost kayaks, spooning each other in the rain all night and a helicopter rescue — we started to reconsider. The power outage pretty much sealed the deal. Ten Mile Creek was out.

And so we settled on Rattlesnake Creek.

Rattlesnake Creek follows Highway 101 for about six miles between Leggett and Laytonville. The highway crosses the creek twice as the two trace the same path together, dancing through thick forests mixed with Douglas fir, madrone, pepperwood and tan oak. On our drive, a bald eagle chased a crow through the rain, banking and twisting and diving high over the Eel River. In that moment, I felt scared for the crow. Usually I see crows dive bombing raptors, but this was different. It looked like the eagle meant business.

When we put in the creek was brown and happy, full of water from all the recent rain, thrashing up into the trunks of trees and grabbing at smaller willow bushes as it rushed by. Eddies, calm places to stop, were few and far between. When my boat hit the water it was instant action — dodging branches, trees, willow bushes and rocks. The rapids were pretty consistent until we reached the first sign of human intervention: a tunnel that was about 100 feet long, and about 20 feet in diameter, all dark inside with dingy concrete walls. The static perfection of the shape of the tunnel lay in stark contrast to the amorphous creek, constantly reshaping the streambed and the rocks and the plants that attempted to grow near it. As I paddled through, I could see there was a drop at the end of the tunnel and I made a quick move to the right, paddling down a tongue that made the five-foot plunge considerably smoother than it would have been otherwise.

After ducking under a downed tree suspended across the creek and some more willow dodging, we came to the first solid set of rapids. Part of the creek went left into some ugly looking boulders while the rest of the stream spilled about six feet over some bedrock into a small hole. It was a fun little drop and we all ran it without incident. This rapid was followed quickly by a few smaller drops and then lots more fast-paced tree-dodging, choosing channels when the stream split into fingers, and the occasional hole that required evasion.

We passed several tributaries that donated the liquid from their watersheds to Rattlesnake Creek, bolstering the size of the stream and changing its nature from a punky teenager to more of a grown-up river. Waterfalls constantly cascaded off the stream banks, spraying mist and making the air almost effervescent.

One of the highlights of the run was a beautiful bedrock gorge. It was short — a half mile or so — but it was unlike any other part of the run. Sheer walls extended 75-100 feet straight up from the stream surface. Dainty ferns and bright green moss clung to the rock as waterfalls of all sizes and characters leaped off the tops of the cliffs. Some shot straight out in one organized stream, as if created by a fire hose; others, not so brave, crawled down the rock walls, clinging to the moss as they went. I paddled under one of the falls and looked up — the water from the cascade seemed to melt into the dull gray sky — as the spray fell on my face and pounded the top of my boat. The rain continued to fall as the brown water of the creek pushed and bubbled about, polishing the bedrock on its way downstream.

The finale of the gorge was a remarkably symmetrical hole in one of the bedrock walls. It was clear that the creek was not meant to go where it was going. Paddling up to the hole gave me vertigo, like my eyes were telling my body and brain something they didn't want to hear. And looking through it was insane, because the river made a turn immediately after the hole, and waterfalls came off the stream bank on the other side of the hole in the wall. There was a fun drop as you exited the hole that added a little exclamation point to the creek.

When we took out for a short portage, a quarter, a hub cap and a gas tank lay helplessly on the stream bank. After the portage it was a short trip to a low head dam-type structure with big bent rusty metal I-beams over the top of it. The purpose of the entire structure was not discernible to the average kayaker. But it did make for a fun rapid that dropped away as we paddled over the concrete.

Below I could see the mother of all tunnels. A double tunnel! As if the other man-made objects weren't enough, we were confronted with yet another marvel of humanity. This one had twin oval arches that were about 15 feet high from the surface of the water with 200-foot tubes that curved around to the right. It was dark inside, but you could see the proverbial light. Some of us went down one tube and some down the other. I went down the right tube. It was eerie.

At the takeout, Damon and I talked about the strange nature of the creek — the "engineered river," as we called it. It was striking: the beauty of roiling river invigorated by rain, juxtaposed with multiple concrete tunnels, a low head dam, a big hole in a gorge wall and the detritus of an automobile society.

Have you ever noticed that humans travel where rivers and creeks have cut trails through steep mountains, blazing the path for us? Rattlesnake Creek is one of those streams that has done the work for us. And like many rivers, road-building has compromised the natural state of the waterway. But even though Rattlesnake Creek has been reshaped from its original form, the intrinsic beauty of a free-flowing river remains. When a big rain hits, the snake seems to come alive, smashing against the tunnels and the concrete that confine it, trying to tell the road where it should be going.