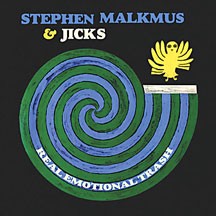 By Stephen Malkmus and the Jicks.

Stephen Malkmus, the former frontman and singer/songwriter for Pavement, revels in playing the role of the trickster. His lyrics are often puzzles, roaming the geographical (and metaphorical) map from Bristow, Calif., to Sheepshead Bay, Brooklyn, while sprinkling in references ranging from the photographer Richard Avedon to film noir. His new album, Real Emotional Trash, is a satisfying slight return.

Malkmus circles back, not entirely, to the territory of some of his adventurous Pavement records, namely the underrated Wowie Zowie. And, the difference lies with The Jicks, with the great addition of drummer/percussionist Janet Weiss (Sleater-Keaney, Quasi), who replaces John Moen, gone to join The Decemberists. (That's Portland in-breeding.) Along with Malkmus and Weiss, the Jicks are Mike Clark on keyboards, guitars and backing vocals, and Joanna Bolhme on bass, synthesizers and backing vocals. They sound tight without losing improvisational feel following Malkmus' meandering and musical subversions with chutzpah, confidence and power.

As Malkmus' lyrics criss-cross the crossword, so does his music. From the opening cut, "Dragonfly Pie," with its heavy dirge of a Black Sabbath-like riff and rhythm, to the following track, the slow rave-up "Hopscotch Willie," it is apparent that Malkmus is creating a guitar-heavy record.

There are parallels to the legendary N.Y. band Television and that band's debut record, Marquee Moon. The album's title track, "Real Emotional Trash," is Malkmus' own version of the song "Marquee Moon." They both have musical peaks and valleys led by heavy guitar lines; they both have dark, cipher-esque lyrics that match the musical drama, and both were recorded in a dry, live atmosphere without any big production sound to accentuate (or overshadow) the instruments and the musicians, thus leaving the band to create a sound of its own. When Television recorded its debut album in 1976-77, leader Tom Verlaine told a confounded engineer Andy Johns, who'd worked for Led Zeppelin and other similar '70s British hard rock bands, that they "wanted a dry sound, no reverb, no giant compression — nice, tight, smaller kit."

Malkmus got crack engineer TJ Doherty to record the basic tracks in Chicago, Brooklyn and Whitefish, Mont., while recruiting Nicolas Vernhes to aid in mixing. Doherty, whose engineering/production work includes Wilco's Sky Blue Sky, Sonic Youth's Rather Ripped and The Hold Steady's Boys and Girls in America, seems to capture that "nice, tight, smaller kit" sound that Television desired. This gives a more organic and immediate feel to Real Emotional Trash. Vernhes, who worked with The Fiery Furnaces, Deerhunter and The Animal Collective, contributes an evenly-balanced mix that leaves openings for the guitars to flourish, jam and, occasionally, freak out.

And as with the surprise Pavement hit, "Range Life," which is filled with wordplay and irony, Malkmus delivers a top candidate for a summer song, "Cold Sun." To the fleeing masses who descend on beaches during the summer, Malkmus sings, "The conjecture is to reject/ the roast ... don't stay high/ on abuse/ cold sun, I am ..." Here, Malkmus blends his pop sensibilities with Weiss' pulsing drum beat and, aided by synthesizer and wah-wah peddle, sings from the viewpoint of the sun — a cold, lonely being, while his worshippers are all roasting, cavorting.

Malkmus' fourth "solo" recording, Real Emotional Trash is arguably his most satisfying solo outing thus far, precisely because it feels like a true band effort, like Wilco's Sky Blue Sky. There's not a lot of fancy stuff or studio tricks here, SM and the Jicks just play, and play well.