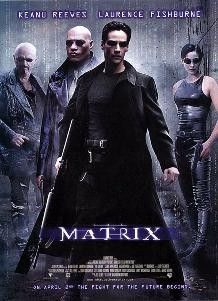 I love those other-reality movies that mess with our minds. The Wachowski brothers' Matrix series, Richard Linklater's Waking Life and Christoper Nolan's Inception have a common premise: We can't know for sure what's real and what isn't.

In the original Matrix movie, for instance, it turns out we humans are harvested by intelligent machines for our bioelectrical energy (whatever!). The everyday world inhabited by Neo (Worst. Anagram. Ever.) and his pals is actually a construct, the "matrix" of the title, so while human bodies are basking in pod city, their minds believe they're off working and jiving and loving and living. The movie was a hit, and not just because of the delicious special effects and the equally delicious Carrie-Anne Moss, but because we understood the plot, effortlessly. "Yep, that's just how my life feels," we thought. As The New Yorker contributor Adam Gopnik cannily observed, "...everybody could grasp the basic set-up instantly...We're not strangers to the feeling that, for much of our lives, we might just as well be brains-in-vats..."

Not only do these movies have similar set-ups, but they have similar flaws -- that is, how do we know when we've reached real reality? Staying with The Matrix for a moment, The Architect is the godlike, omniscient creator of the artificial world that humans believe they're living in. But how does he know he isn't in his own ersatz world, created by some higher-level architect? (Turns out late in the trilogy that he may actually be aware of his own artificiality, but that just moves the problem up one level.) The conundrum was made explicit in the last shot of Inception, when Leonardo DiCaprio's character is so excited about being reunited with his kids that he doesn't stop to check on his reality check "totem," a top that only stops spinning when he isn't dreaming. (Or does it? Did anyone who saw the movie not wonder why he couldn't dream that it stopped -- that is, that it was all a dream?)

But we know differently, of course. I mean, it's just a movie! When the lights go up, we walk out through the lobby into the real world, right? Or do we? How can we ever know if our world is real?

We can't. Suppose for a minute that this apparently honest-to-God world of ours is a construct, a dream or a computer simulation. Maybe it was all created five minutes ago by a god or superintelligent being, together with all our memories and historical evidence. Or we're just brains in petri dishes, stimulated by electrical probes for the amusement of aliens. (They must love jiving us with SimCity.) We can't be sure.

But -- this is the good news -- neither can they! The aliens, or gods or intelligent machines, they're in the same boat as us. If the beings who created our simulated world can't get outside their world, they'd have no reason to doubt their own view of reality. And (not to belabor the point) if they did get outside it, how would they know that wasn't a construct too?