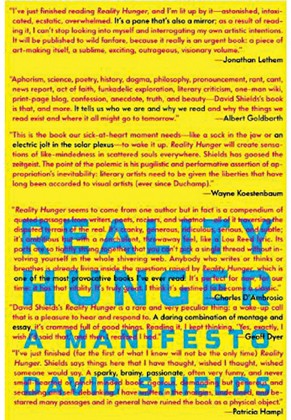 The last few years have seen an explosion of scandals when supposed "true life" memoirs have been revealed to be fabrications and fictions. James Frey was forced to recant in the church of Oprah, street kid celebrity author JT Leroy turned out to be a fictional character himself (or herself), and many first novels from major publishers are now predicated on the real life back story of their authors, if only for promotional purposes. We're told by some that reality has outstripped fiction's ability to represent the world we live in and that the novel is a relic of the past, though many works of supposed fact seem to belie that by indulging in fiction.

In his new book-length manifesto, David Shields attempts to sketch out this new literary landscape and define its confused aesthetic with mixed results. Shields, author of several novels early in his career, is better known for later books of non-fiction on sports and celebrity culture. His book intends in part to be a defense of the superiority of a certain kind of subjective non-fiction over fiction. It's easy to agree with Shields that many of the most interesting books have indeed been this kind of individualistic non-fiction, which far from being new, was practiced by William Hazlitt, Twain and others in the 19th century, and are hardly the cutting edge that Shields imagines.

Shields' primary gimmick is that most of his book is constructed of numbered paragraph quotations from other writers (Chip Kidd's witty design of the cover consists of nothing but blurbs from other writers). The result is occasionally fascinating, but too often dull and repetitive. A few years ago Jonathan Lethem wrote a very similar appropriationist essay for Harper's using the same technique that was everything this one isn't: concise, straightforward and coherent. Shields makes no discernible sustained argument other than a defense of collage techniques in writing and a preference for works that walk the line between fact and fiction. Most embarrassing are the quotes from and about hip hop culture, in which Shields resembles your nerdy uncle with a backward baseball cap trying a little too hard to be down with the kids.

There are several paragraph snippets in Reality Hunger that are amazingly insightful, and seem to display a vivid, muscular prose the rest of the book sorely lacks. When I turned to the attribution index I found they were all originally written by Ralph Waldo Emerson. I came away from the book thinking that David Shields might not have much new to say about today, but this Emerson guy still might tell us quite a bit about the 21st century world we live in.