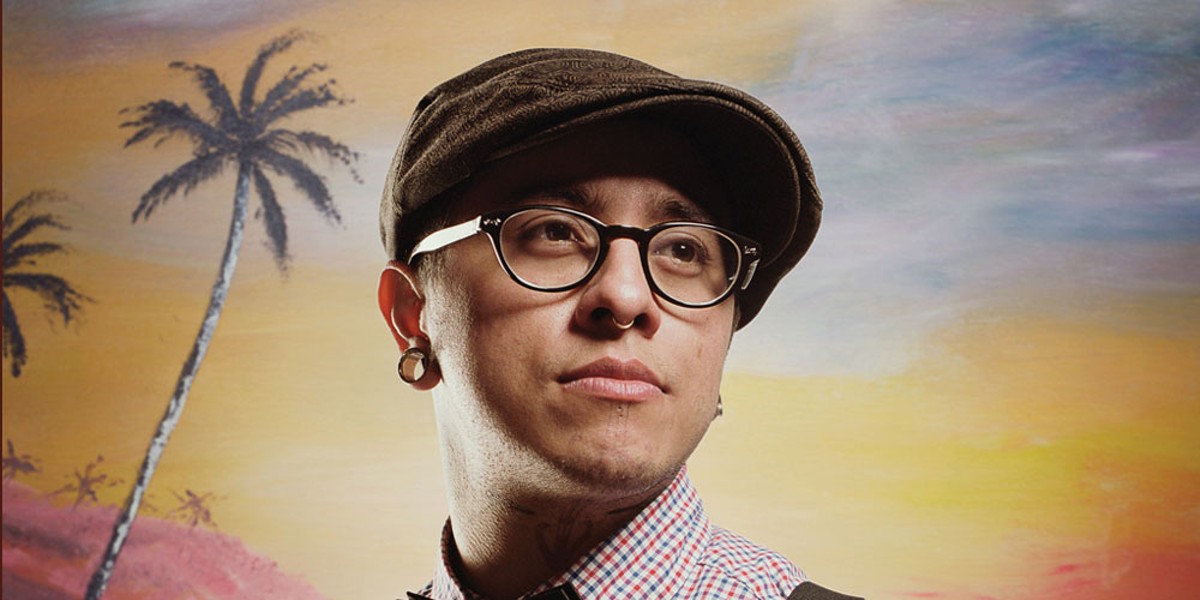 Courtesy of the artist "Island Paradise (Xavier)" by Lorenzo Triburgo.

Humboldt State University's Third Street Gallery takes on the topic of transgender identity with two concurrent exhibitions running through March 5. One features New York-based Lorenzo Triburgo's photographic portraits of trans men; the other is a collaboration between recent HSU art alums Megan May and Marval A. Rex, artists and romantic partners whose multimedia collaboration portrays their relationship as Rex transitions from female to male. Gallery director Jack Bentley has put together a pair of timely, incisive shows that meditate on the relationship between gender and the flesh from different vantage points.

Triburgo's Transportraits are modestly scaled 24-by-20-inch "studio portraits of 20 people who, like the artist himself, identify as trans or genderqueer. The bust-length portraits show mostly young, white trans men posing in front of painted-landscape backdrops. Some embrace utilitarian, unisex normcore fashion; some use quiffs, mullets, piercings, gauges and tattoos to make their bodies a riot of signs. Subjects declare their presence, facing the camera in a stagey manner that seems to say, Behold!

Also stagey and self-aware are the deliberately bad landscape-themed portrait backdrops. These turn out to have been painted by the artist according to step-by-step instructions communicated in The Joy of Painting, the legendary half-hour instructional TV show hosted on American public television by Bob Ross from 1983-1994.

Everyone here is shot from slightly below but no one makes eye contact: All 40 eyes fix starrily on something above and beyond, like the moist eyes of the saints and sinners in Pierre et Gilles' camp photographs. Art historian Eliza Steinbock has written that Triburgo instructs his sitters to imagine themselves gazing out at a sea of people.

This may all sound a bit programmatic and in fact the Transportraits have a gender-theory axe to grind. Triburgo's statement reads in part: "I knew I wanted to create a project that addressed my trans, genderqueer experience, and that at the forefront of the project needed to be the fallacy of a fixed gender identity, affixed to the biological. Feminists work tirelessly to reveal the misconception of the perceived connection between 'the body' and the 'gender.' I am convinced that documenting my own physical changes (or any trans bodies) would serve only to solidify this imagined relationship."

A lot of recent art about trans experience uses intimate revelation to depict gender transition as a process through which subjects' bodies come to align more precisely with their sense of self. Documenting the waxing or waning of secondary sexual characteristics can be a way to catalog the journey. By way of contrast, Triburgo's portraits avoid the flesh. They celebrate the construction of public personae.

Triburgo's expressed reluctance to show genderqueer bodies is founded in his belief that such depictions reinforce the binary ways of thinking about gender he wants to discredit. His vision posits gender transformation as less of a point A-to-point-B commute and more of an off-road excursion. This trip has no fixed destination. It can't be plotted on a map.

The "nature" in the amateurish landscape backdrops is not real, of course; it's not even a straightforward DIY attempt but a sly pop culture reference. In Triburgo's constructionist account, the notion of gender-as-nature is similarly discredited. Instead, gender is depicted as a social construct — less a matter of chromosomes and stubble, more a matter of how one performs in the world.

The pieces in Just Kids — Tender Forever run hot where the Transportraits are cool. Where the latter artworks are suave and structured, the former are exuberantly messy and unconstrained. Megan May and Marval A. Rex, collaborators in art and romantic partners in life, portray themselves as young lovers whose bond has been deepened and enriched by Rex's recent decision to come out as a trans man. May and Rex embrace alter egos, referring to themselves by a variety of aliases and avatars, yet the works are unremittingly autobiographical. Digitally manipulated images, video, text and ephemera trace the evolution of the couple's love by documenting the changes that take place in Rex's body as he goes through hormone therapy and top surgery. It's all very confessional and raw.

One photograph shows some of the quasi-medical paraphernalia associated with gender transition, as if to gratify the most basic forms of curiosity — here they are, the clean pads and the used syringes. A 19-minute video titled "Lü, Treading (Garden Installation)" cites the stylings of the pair's art heroes — poets of the perverse one and all, including Pipilotti Rist, Robert Mapplethorpe, Diane Arbus and Patti Smith, whose award-winning 2010 memoir lends the show its title. Maggie Nelson's memoir of pregnancy and gender transition The Argonauts gets a shout-out, as does a video by Harry Dodge. Works in this exhibition resonate with the auto-documentary projects being made by artists including Petra Collins and Momo Okabe, whose show last year at San Francisco's Casemore Kirkeby gallery was a standout.

The unabashed romanticism in the work, like its confessional bent, will be familiar to anyone who knows what falling in love can be like in one's early 20s. What may be less familiar are the heightened levels of self-consciousness that May and Rex bring to their collaborative portrait of young love, and their apparent comfort with the abolition of public and private boundaries. "Us two, we are modern day millennial martyrs," Rex writes, framing the over-share as joyous sacrifice.

Lorenzo Triburgo will present an artist's talk at HSU on Thursday, Feb. 2 at 5 p.m. in Room 102 in the Art Department Building. This event is free to the public. A reception for the artists will be held at the HSU Third Street Gallery on Saturday, Feb. 4 from 6 to 9 p.m. during Eureka's monthly Arts Alive program.