Recovering from the Freeze 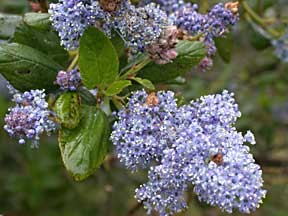 At the plant sale in Trinidad a couple weeks ago, everyone was talking about what they'd lost during the freeze. Many of us were still having a hard time believing that it had happened at all. "It was just one freeze after another," someone would say, shaking her head. "Night after night. It never let up."

Almost everyone who mentioned the freeze to me brought up tibouchina, or princess flower - the shrub with brilliant purple flowers and fuzzy green leaves fringed in red. It's a tropical shrub, native to Brazil and naturalized in Hawaii, but for some reason it's perfectly happy in Humboldt. I have three in front of my house, and they bloom almost all year long. The color contrasts perfectly with the sage green color on my living room wall, so that when you sit in that room and look out the window, the effect is so perfect that it almost looks like I know what I'm doing.

No matter what else was happening in my garden, I was sure to get compliments on my princess flowers. That is, until the freeze came along and cut them down in their prime.

I was ready to rip out their brown, brittle remains and replace them with something hardier, but my husband insisted that we keep them. After all, the shrubs require almost no care - they're not prone to any disease, they don't need much fertilizer and they survive on very little water in the summer. They made it through at least a decade of winters before this one came along.

So I hacked away at the dead stuff, leaving only the sturdier lower branches, and piled some compost around the roots and waited. Sure enough, in a few weeks, tiny red shoots started appearing on those branches -- the first signs of leafy green growth. I'm still not sure if every branch has life in it, but a few of them do, so I've decided to let them live.

But what about the rest of the garden? An enormous scented geranium was simply vaporized by the cold; I don't think it's coming back. The brilliant orange leonotis (lion's tail) also seems to be dead, although I've cut it back, too, in hopes that it will reverse course. And some beautiful salvias are gone, including S. mexicana 'Limelight' and the fuzzy red-flowered S. confertiflora. Both are ridiculously easy to grow from cuttings; it's my own fault for not bringing a few inside before the cold hit. I'm hoping that they'll rebound too, but it's not looking good so far.

So what to do about these gaping holes in my garden? I already knew that I wanted to plant more bee-friendly plants, and this time I was determined to choose something that would stand up to a cold winter. That got me thinking about natives.

"Sure," said Freshwater Farms owner Rick Storre when I called to ask him for suggestions. "I went outside after the frost and guess what? We didn't lose a single plant."

Now you're talking. I stopped by the nursery and he showed me a ceanothus that blooms eleven months out of the year. The lilac blue flowers attract not just bees, but also ladybugs, lacewings, beneficial wasps and all kinds of other good bugs. They tolerate clay soil, require almost no water and rarely suffer from pests or diseases. What's not to like?

The trick with ceanothus is to find one that works in your garden. The 2007 edition of the Sunset Western Garden Book devotes two full pages to the shrub; look through their chart and find a cultivar that will reach the right height for the space you have. Make sure it will tolerate some summer moisture if you're going to work it into a border that gets watered.

Another showy native you might consider is fremontodendron, or flannel bush. This golden-flowered native grows to the size of a small tree, reaching about twenty feet tall and blooming over a long season. Rick showed me a sturdy specimen that was about to burst into bloom. It was growing in front of a barn facing Myrtle Avenue. "I have got to get some more of these plants in," he said with a sigh. "As soon as this thing blooms, everybody's going to want one."

He also showed me the grayish-green shoots of matilija poppy; this shrubby perennial reaches six to eight feet and produces enormous white flowers with yellow centers all summer long. And he convinced me to go home with a couple pots of California fuchsia (zauschneria), the low-growing silvery shrub with reddish-orange flowers that hummingbirds go mad for.

I haven't completely sworn off those half-hardy perennials that only barely make it through a cold winter. Testing the limits of this climate is half the fun. But next year, I'm taking some cuttings before the first frost hits as an insurance policy.

Really. I mean it this time.