Recreating the Colorful Past 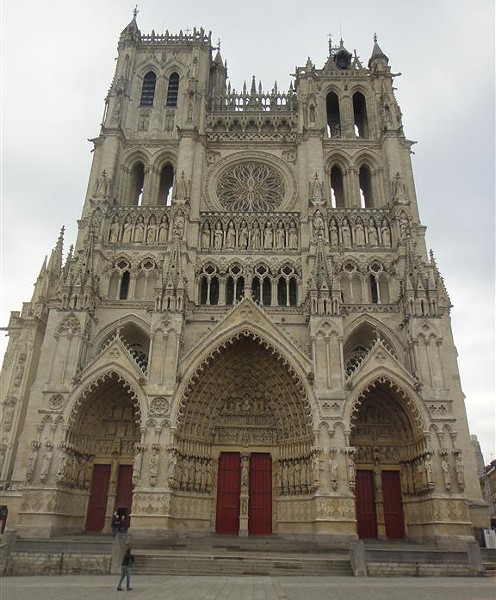 The process of restoring works of art frequently turns up surprises. Nowhere is this more in evidence than on the carvings in the west portals of Amiens Cathedral in northern France. Starting in the mid-1990s, technicians engaged in cleaning the hundreds of statues were amazed to find flecks of ancient paint on virtually every figure they examined, leading to the conclusion that the present gray stonework was once flamboyantly colored. The discovery was the first step in a wonderfully successful, and unexpectedly moving, re-creation of the facade of the cathedral as it looked nearly 800 years ago.

Amiens, capital of the Somme department in Picardy, is about two hours north of Paris by train. Eight centuries ago, during the long and peaceful reign of Louis IX (1226-1270), the city was a major center for agriculture and the textile trade. In particular, the woad plant (Isatis tinctoria) was cultivated there for the bright blue dye obtained from its leaves. Although woad is probably best known as the dye with which ancient Britons daubed their naked bodies before heading into battle (according to Caesar), it was one of the three dominant plant-derived dyes used in Europe during the Middle Ages (the other two being weld, for yellow; and madder, for red). The woad-based dye industry brought prosperity to the region. And prosperity, in that heady time and place, meant cathedrals.

Amiens was one of about 30 French cities caught up in the Gothic cathedral craze of the 12th and 13th centuries. The term "Gothic" (originally applied as a Renaissance term of derision, it has nothing to do with Gothic tribes) refers to three revolutionary inventions -- pointed arches, flying buttresses and ribbed ceiling vaults -- that enabled architects to create those tall, airy, window-filled cathedrals. In 1220, Amiens' 20,000 citizens convinced themselves that they could out-build all other contenders. They began work on what was to be the highest and largest cathedral in France at the time, finishing the task in a relatively short 50 years. It remains the largest cathedral by volume, and is the highest complete Gothic cathedral -- only Beauvais, which lacks a nave, is higher.

Back to the statues. While the hundreds of kings, saints and Biblical figures on the west facade are impressive enough, they are (truth to be told) a little dull in their uniform gray, the color of locally quarried limestone. It wasn't always so. In the 13th century, visitors were greeted with a mélange of rich colors, as evidenced by those flecks of paint found by the restorers. If only we could now see what would have once stunned a medieval traveler coming to the cathedral for the first time...

... and we can! At night through summer months, eight powerful projectors bathe the facade of the cathedral with light shone through Ektachrome® transparencies that have been artificially colored in strict accordance with the restorers' findings. As the lights come up, the statues magically turn from gray to polychrome -- a riot of blue, red, orange, yellow and green -- bringing back to life what had been eroded by hundreds of years of sun and rain. The illusion is perfect: The statues are painted. There's no outward sign that the color is projected (other than the projectors themselves). Viewing them recently, I was completely taken back to the Middle Ages, in thrall to the spectacle, feeling a little like a humble pilgrim myself.

Barry Evans (barryevans9@yahoo.com) is already planning a return trip. Son of Field Notes (a compilation of Barry's columns for the last 18 months) is for sale at Eureka Books and Northtown Books.