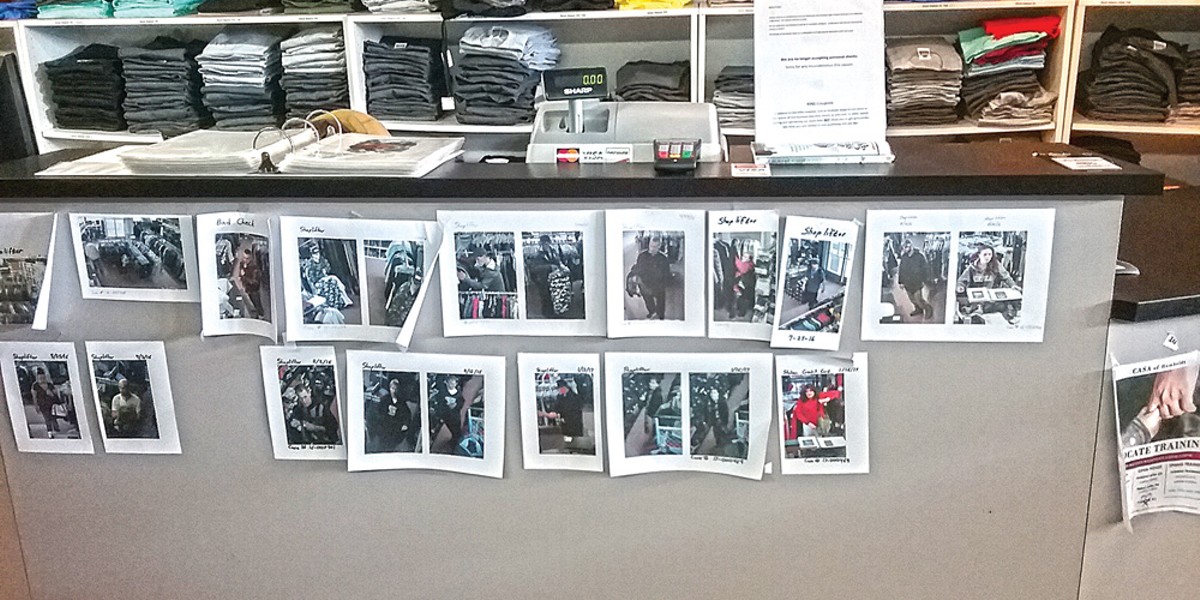 Photo by Linda Stansberry The counter at Irv's Big and Tall is decorated with stills from its security cameras.

The Eureka Police Department has a new weapon in its arsenal to combat serial shoplifters: The threat of jail time. Dogged by complaints that, due to realignment and a crowded jail, shoplifters are often just booked and immediately released to offend again, EPD announced last week that it will work with the Humboldt County Sheriff's Office to try to keep suspects in jail until arraignment. The announcement came as welcome news to many business owners, but the efficacy and constitutionality of the new policy are both in question.

EPD's statistics indicate calls for service related to shoplifting have been erratic since the passage of Proposition 47 in 2014, which reduced some felonies to misdemeanors. In 2015 there were 362; in 2014 and 2016 there were 270. But EPD Capt. Steve Watson said statistics are not the precursor of this policy "so much as the bold, aggressive and belligerent nature of many of these repeat theft offenders." He cited a recent incident in which an unnamed business owner confronted a thief and asked him to return an armload of stolen items in exchange for not pressing charges. The shoplifter refused. The frustrated store owner spoke to a county supervisor, which led to a conversation between EPD Chief Andrew Mills and Sheriff Mike Downey about having arresting officers fill out Request for Non-Release forms that will, ostensibly, keep repeat offenders behind bars.

Watson added that statistics may be unreliable because it's possible fewer store owners are reporting shoplifters to the police. Anecdotally, local small business owners said theft has increased over the last three years.

John Baddeley, who owns Myrtlewood Liquors and John's Fine Cigars, said they rarely call the police for shoplifting. Many thefts go unnoticed until merchandise is found to be missing and the staff rewinds its security tapes to pinpoint the offender, revealing stunts like the man who filled a thermos with sake wine. The thefts place a strain on the store's budget and on the goodwill of its owner, who has been in business for 17 years.

"It's gotten worse," said Baddeley. "I just assume everybody's stealing. And we don't call the police. They aren't going to do anything."

Baddeley's business falls within the jurisdiction of the Sheriff's Office and he says part of his reluctance is he doesn't want to "waste their time."

Across town at Henderson Center, Michael Irvine, owner of Irv's Big N' Tall men's clothing store, said he has taken a proactive approach to this state of affairs by posting stills of thieves from his security cameras on social media and asking for help identifying them. Once he has a name, he pesters EPD for a case number. The family-owned business has turned the front of its counter into a makeshift rogues' gallery, festooned with stills from the camera, some of which have case numbers written on them in bright orange marker. Asked whether the photos are off-putting to customers, Irvine chuckled and said no.

"Thieves don't like friends and family knowing what they're doing," he said. "I get a lot of people coming in telling me these people are idiots."

Irvine said the new policy is a "step in the right direction" but he would like to see more extreme measures for thieves, like the "tent camp" detention compounds he's heard they have in Texas.

"Something has got to be done to stop this," he said. Irvine also believes that Proposition 47 is responsible for an increase in theft. He said that prior to realignment the average theft resulted in a loss of about $30 to $40. Now it's close to $100 an incident, with people scooping up armfuls of the popular Pro-Line brand clothing and sprinting outside to a waiting car. Some thieves have "shopping lists," he said, and he believes they exchange the merchandise for drugs. The store has also been broken into four times, with each burglary costing around $4,000. In response, Irvine installed a roll-down security gate and outfitted the tiny store with 15 cameras, which he monitors from the back office.

"It's not only costing me, the merchandise that's lost doesn't collect any sales tax," he said, adding that other business owners in Henderson Center and at the Bayshore Mall have reported similar problems.

It remains to be seen what impact EPD's new policy will actually have, as those who arrive at the county jail when it is over capacity may still be released early on their own recognizance. And, according to HCSO Lt. Marco Luna, the jail has been at capacity every day so far this year. But Watson said that every hour behind bars is an hour the offenders won't be victimizing businesses.

"No one's pretending that this is going to be a solution to an endemic problem that no department can arrest their way out of," he said. "But it does make a difference when people who are stealing every day from businesses are locked up."

In order to meet the criteria of the new policy, suspects must have a previous conviction for theft in the last five years or an arrest for a theft crime in the past two years. The victim must be willing to make a citizen's arrest if applicable, and be willing to press charges. Suspects who can post bail will also be released.

David Marcus, the recently appointed county public defender, said his department has reviewed the policy and, while there is some concern that the policy might weigh heavier against indigent clients who cannot afford bail, overall, they concluded that its language was sound.

"We're not happy about it but it looks like there is statutory authority for officers to hold someone under this policy," he said, adding that the public defender's office will keep an eye on the policy's potential to exacerbate jail overcrowding.

But Michael Risher, senior staff attorney for the American Civil Liberties Union of Northern California, disagrees with Marcus' assessment. Risher said giving officers the power to incarcerate suspects prior to a verdict violates both the U.S. Constitution and the California penal code that applies to misdemeanors.

"The Constitution is clear: You cannot punish somebody unless they are convicted of a crime," said Risher. "To use incarceration to dissuade or punish, that would violate the Constitution."

California Penal Section 853.6, to which the new EPD policy also refers, includes 10 specific circumstances in which an arresting officer can request nonrelease of a suspect arrested for a misdemeanor, including intoxication, vehicle code violations and lack of identification. EPD's policy refers to the section that said nonrelease is indicated when an officer believes there is "a reasonable likelihood that the offense or offenses would continue or resume, or that the safety of persons or property would be imminently endangered by release of the person arrested."

Risher said that police officers have to use individual discretion and that codifying this discretion through the new policy violates the same statute it cites.

"This looks like an invitation to break the law," he said.