The 'Fieldbrook Giant' returns to Humboldt after a century

At 18-inches tall, the delicate sapling looks almost vulnerable as Blue Ox Millworks and Historic Park co-founder Eric Hollenbeck and Freshwater resident Steve D'Agati hold it aloft on a recent morning in front of a massive cross-section of the ancient tree from which it was cloned.

The moment was, in many ways, a homecoming for the small sprout derived from what is believed to be one of the largest coastal redwoods to ever exist. Known as the "Fieldbrook Giant," the tree stood sentry over the North Coast from east of McKinleyville for more than 1,000 years before being cut down in 1896 as the result of what was widely believed to have been a drunken bet.

While estimates vary, the Giant was around 35-feet across — including an outer layer of bark — and may have reached upward of 360 feet before being felled by Vance Lumber Mill to secure wealthy American William Astor's wager that he could build a massive table out of a single tree, according to newspaper articles written during an international frenzy over the incident.

Hollenbeck, who spent decades in the woods himself, estimates it likely took two men working 10-hour days at least a week to "drop it" using a specially made 19-foot saw called a "misery whip" that is now on display in his workshop.

That alone would have been a massive undertaking that necessitated master loggers who would have to direct exactly where the tree fell to ensure it hit a "bed" made of cuttings and other soft materials to avoid damaging it.

"You miss that bed and that tree's toothpicks," Hollenbeck says.

While never used as a table, according to D'Agati, one of the Giant's cross-sections still resides in the garden of Astor's former English estate. The massive slab — weighing 13.5 tons — was pulled to the country manor by a team of 16 horses after being shipped from Humboldt to San Francisco then around Cape Horn to New York before heading off to London.

Closer to home, another slab sits at the Blue Ox after spending a century as the back wall of a Eureka tourist shop called the Stump House that carried all sorts of redwood souvenirs, including a doll named "Dolly Redwood," whose hair and outfit were made entirely of bark.

One of the dolls now sits preserved in a glass case in the Blue Ox's office.

"Isn't she beautiful," Hollenbeck says, holding the doll up to show visitors gathered for the tree's debut.

Hollenbeck salvaged the doll and the cross-section — as he has done with so much of the antique machinery in his workshop — after a fire destroyed the Stump House's Fifth Street building in 2002.

But hauling the piece the short distance to the Blue Ox's location off X Street was not without its share of drama. 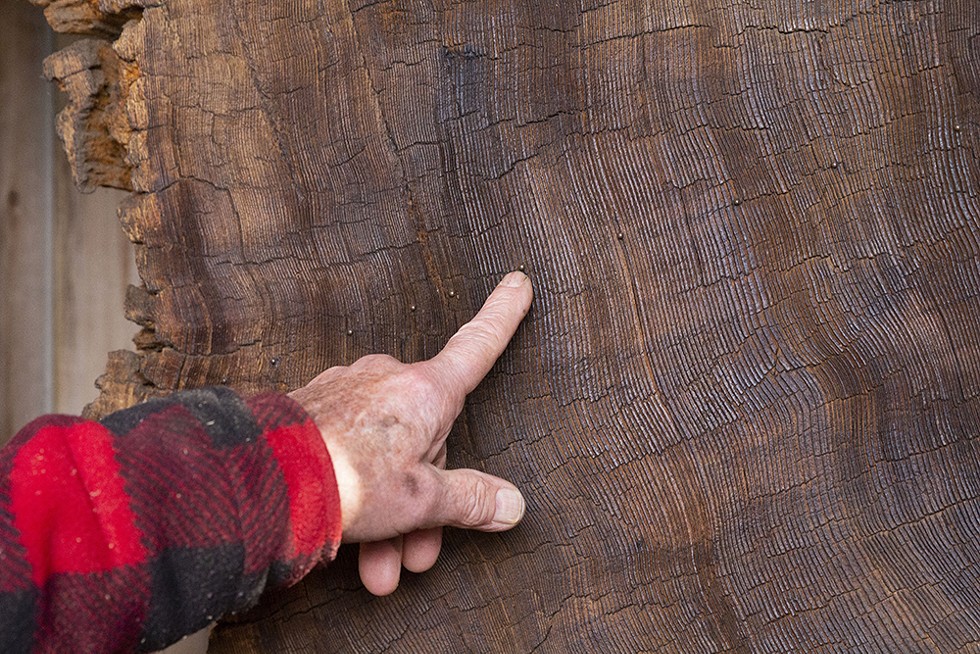 According to Hollenbeck, nearby Don's Rent-All loaned him a forklift to load the hefty wood hunk into his old blue truck dubbed "Ophelia Bump" but he ran into a glitch.

The piece, he says, was "sticking out 5 feet on each side." Not sure what else to do, Hollenbeck called the police, who told him curtly, "Don't move," before hanging up.

Thinking he was in trouble, Hollenbeck waited for their arrival. To his surprise, Hollenbeck says two officers escorted him with "lights and sirens all the way back" to the Blue Ox, where the cross-section has stood ever since.

The piece is a natural fit for the sprawling Blue Ox property that Hollenbeck bought in 1972 with a $300 bank loan. Over the ensuing decades, he and his wife Viviana have transformed the former mud flat into a sanctuary of gardens and towering trees surrounding the historic park and Victorian millworks, which is known around the world for its authentic craftmanship.

D'Agati found himself there one day this summer while walking his dog along the waterfront path that goes by the Blue Ox. He had recently become intrigued by the story of the Fieldbrook Giant and the rumor that genetic material had been taken from its stump to grow exact replicas.

An August article by local historian David Heller about the tree's history and the efforts of Archangel Ancient Tree Archive, led D'Agati to contact the Michigan-based nonprofit that has created "a living library" of old growth tree genetics and propagates clones of the world's so-called "champion trees," one of which is the Fieldbrook Giant.

"The rumor turned out to be true," D'Agati says.

Passing the Blue Ox soon after the article came out, D'Agati says he realized this would be the perfect place to get some information to aid him in his quest and decided to stop by. What he hadn't expected was to find a piece of the very redwood he was looking to bring back to Humboldt.

"It was serendipitous," D'Agati says.

"I love how the universe arranges things," she says.

D'Agati was able to secure five exact genetic replicas of the Fieldbrook Giant from the Archangel's archive that arrived late last month. Now, after 120 years, those saplings are being planted in a variety of places in the region, including one at the Blue Ox and another in Fieldbrook.

As it turns out, D'Agati and the Hollenbecks share another connection of sorts. Along with overseeing the historic park and millworks, the couple and a team of teachers ran a community school for at-risk students who faced challenges navigating a traditional classroom setting.

Looking through some of the yearbooks the students created using lead type and an antique printing press, D'Agati recognized several from his many years as a group counselor at juvenile hall.

He says the more he learns about the Hollenbecks, the more he appreciates the exceptional place they've created at the Blue Ox, helping not just young people but also veterans who find themselves again through the lessons of traditional craftmanship.

"What they have done here is something very, very special," he says. "I'm just stunned. It is a place out of old California."

Ultimately, D'Agati says bringing the Fieldbrook Giant home was "to give something back" to a community that has been "very, very good to me."

The clones' journey back began several years earlier, when Jake Milarch, who oversees all tree propagation at the Archangel Ancient Tree Archive, suggested that the nonprofit add the Fieldbrook Giant to the collection.

Archangel's cofounder David Milarch says when his son floated the idea of bringing the Humboldt County redwood "back from the dead," his response was, "That's kind of a tall order."

But Jake Milarch persisted and they were able to track down the owner of the Fieldbrook property where the stump still sits and collect genetic material from sprouts on the trunk. 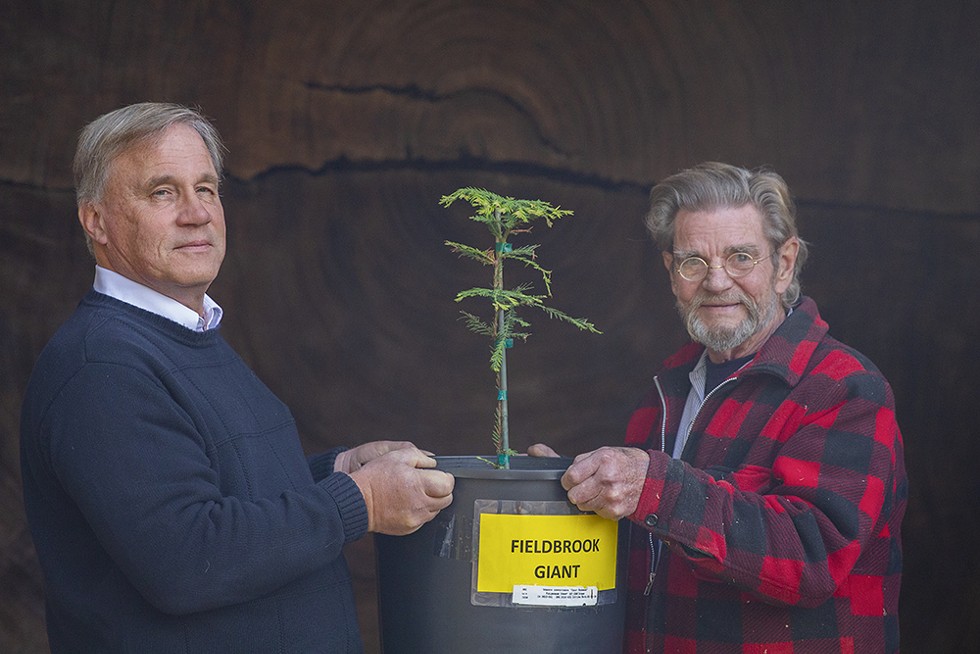 "It will live on," David Milarch says. "To me, it's almost a miracle. When we began, I thought the only chance we had was divine intervention."

A third generation nurseryman, he says the mission of the archive is to "clone the 100 oldest largest trees in the world ... and preserve their genetics because all of them are being threatened."

The nonprofit has sent clones to be planted all over the world, including the Presidio in San Francisco. Among its collection are the genetic fingerprints of 70 old growth coastal redwoods, as well as other trees, like maples and Monterey cypress. Even in its impressive company, the Giant stands out, David Milarch says.

"The Fieldbrook stump outgrows every one of them hands-down," he says. "And that's saying something."

If all goes well, that tiny tree held aloft by Hollenbeck and D'Agati will someday soar hundreds of feet into the sky, creating a canopy over the "Redwood Shrine" at the Blue Ox Historic Park and Millworks that houses the Fieldbrook Giant's cross-section.

"It's gives me great hope for the future and it seems like the world needs that right now," David Milarch says. "To be able to bring that back is an honor and a pleasure."

Kimberly Wear is the assistant editor at the Journal. She prefers she/her pronouns and can be reached at 442-1400, extension 323, or kim@northcoastjournal.com. Follow her on Twitter @kimberly_wear.