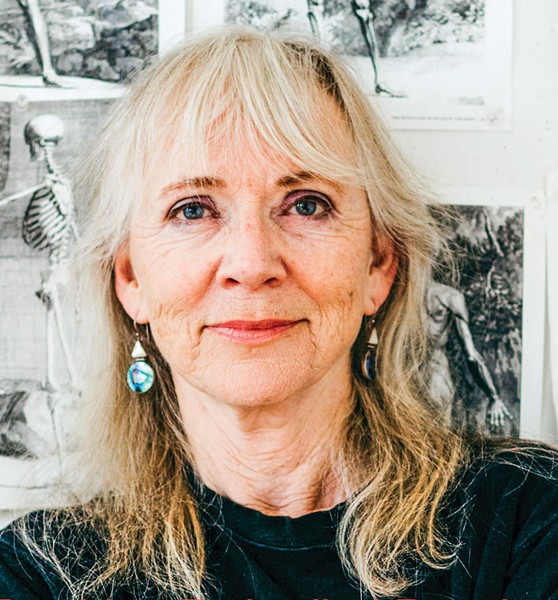 Every morning when I sit at my dining table, I see the card Joan Schirle sent me this last holiday season. "Hope to see you in the New Year in person!" she wrote in effortlessly fluid green script, signing off with a heart and a big curly J. And every morning when I sit down at my desk, at eye level is the Winnie the Pooh drawing she sent the year before, addressed to "our Lady of the HAT" and decorated with hand-drawn martini glasses and an appropriately rhetorical question about syntax. Each day, I am reminded how important her presence became in my life. Welcome to SchirleWorld. Quietly, gently, inexorably, it sucks you in.

Joan Schirle has been an important and influential presence in Humboldt County theater and beyond for more than four decades. She co-founded Dell'Arte International in 1976, developing the concept of theater of place, and remained an integral part of both the theater company and the school up to and including the leadership transition to a new generation in 2019. She led the creation of both the country's only three-year MFA program in ensemble-based physical theater (currently on hiatus) and the continuing one-year professional training program at Dell'Arte. If you saw any of the Mad River (now Baduwa't) Festival or holiday shows produced at Dell'Arte, you've been touched by her on-point, incisive writing, engaging performances and tightly focused direction. And somehow, she also found time for international collaborations in Bali, Denmark, Brazil, Zimbabwe, France, and Mexico, to become a Senior Alexander Technique instructor, to write widely about her philosophy of the performing arts and to teach and perform all over the country.

How did SchirleWorld draw me in? It started with a low-level investment in Dell'Arte's musical Mary Jane that rewarded me with a personalized video greeting from Her Marijuana Majesty. Then came the hats. Oh, so many hats. Joan and I are both hat people, and I think I became a behatted mascot of Blue Lake theatricals. By the time the Mary Jane movie had been made, I was well and truly embedded, while Joan was ready to burn Mary Jane's iconic costume and never again reign over the Emerald Ball.

In 2015, I acquired a new metaphorical hat: theater critic for this esteemed publication. But this wasn't just hanging out or posting about the powerful storytelling in Joan's Elisabeth's Book (Dell'Arte, 2014). This was serious, professional stuff. How could I, an everyday theatergoer, critique a performer of her caliber? Here was an artist who never took on a character she couldn't fully become, disappear into, on stage.

Three years passed before I reviewed Joan as the title character in Redwood Curtain Theatre's production of Marjorie Prime. She was graciousness personified at the opening-night reception; she and the rest of the wonderful cast made my task easier with their warmth and openness. I felt comfortable being honest and that broke down another barrier for me.

The Zero to Fierce Womxn's Festival was getting traction at the Arcata Playhouse, highlighting another of Joan's projects — working with sculptor Marit Benthe Norheim on the epic Life Boats project. I later dreamed the huge floating sculptures sailed down an undammed Klamath River and the three of us talked about how wonderful it would be. Joan got as far as figuring out how to get the sculptures to California and who to target as sponsors. I still marvel at the infectious enthusiasm and focus she brought to every opportunity, no matter how crazy. In SchirleWorld, anyone might do six impossible things before breakfast.

The next year, 2019, marked my retirement from a day job. And as luck (or fate) would have it, Joan and two other master posture and movement teachers were leading a five-day Alexander Technique workshop at Dell'Arte for the first week of the rest of my life. Again, I was outside my comfort zone and again, Joan helped me ease into this new environment. At one point, she looked into my eyes and saw I was holding back. She focused in on that hesitancy and coached me through, allowing my vulnerability to show and become part of who I was. It was a moment of great relief I have tried to incorporate into my life — a "zero to fierce" moment, if you will.

That year also saw Joan's masterful recreation of the life of her friend and fellow performer Queenie Moon, who'd descended into the hell of frontal temporal dementia. I don't think Joan ever encountered a pivotal moment in life without wanting to share with an audience. For her, theater was life.

Joan staged Bird of the Inner Eye, her final production, last year. In many ways, it is the epitome of theater of place — conceived and written by Joan about Morris Graves, an artist whose life and work are an deeply connected to Humboldt County, and ushered into existence with the help of composer Gina Leishman and Joan's (and now my) dear friend, Jane Hill. I was privileged to experience the production live in the Arcata Playhouse and, while I was never able to review the opera for the Journal

Last September, as Joan’s health began to decline, I came across “Spirit Bird Drawing,” an original Morris Graves piece I could actually afford. Shortly after it arrived from the gallery, Jane and I met up with Joan for a meal at the Pub and Sunday Jazz at the Playhouse. It was the last time I would see her. While she was not allowed to drink alcohol, everything else about the evening was so very normal — at least for COVID times. Although her hair had thinned a little, she looked good (those handy hats!), she ate a decent-sized meal and talked animatedly about her annual trip to Mexico the next month — she was particularly excited her doctor had told her she could have some tequila there.

At 4:10 p.m. on Feb. 1, cancer took Joan Schirle from this world. Three days later, I had surgery to discover whether the same fate awaited me. I was lucky. Joan was not. But I still have those holiday cards and Graves’ Spirit Bird to keep me connected to SchirleWorld, and I don’t mourn her passing while I can continue to visit that wondrous place in my dreams.

Pat Bitton (she/her) is a freelance writer/editor based in Eureka who is theoretically retired but you know how that goes.