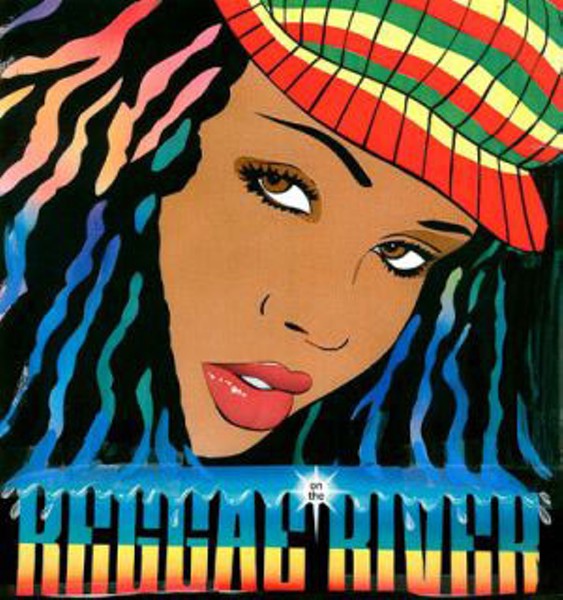 Reggae on the River art

In front of an adoring crowd, Culture’s lead singer Kenyatta Hill dedicated his performance at Reggae on the River to his deceased father, the roots star Joseph Hill. The senior Hill helped found the band and penned such esteemed roots classics as “Two Sevens Clash” and “Zion Gate.”

Gigantic shoes to fill, but Kenyatta not only sounds extremely good on the smoothed-out roots tunes, but leads the crowd in ecstatic dance steps -- arms flailing and dreads leaping around his face. He growls, chants and between songs uses his microphone to elicit creepy horror effects via the echo-box while he injects energy into the sun-blasted crowd.

Culture has been a reggae festival headliner for more than 30 years -- the conscious choice when it comes to roots reggae. I saw a lot of old reggae festival T-shirts -- sure indicators that some attendees had probably seen the band a few times. Long-time reggae fan or first time festival-goer, everyone seemed pretty impressed with this performance.

Of course, the festival space is simply gorgeous. Nestled into a grassy river bank with a stage caressing the roots of a grove of redwood trees, no matter where you stand at Benbow you can probably see the river, redwoods and the mountains. The Mateel made sure that the sound was absolutely bumping this year, and even knee-deep in the river, hundreds of yards away from the stage, I could feel the bass of New Zealand rockers Katchafire pounding in my chest.

Katchafire gave wonderful energy to the crowd and lured in many a dancer. The Benbow stage is intimate -- no significant barrier between the performers and the crowd, and both Katchafire and Warrior King tapped hands and connected with the writhing crowd.

This festival was youth friendly, and kids of all ages joined the dancing masses and ran pell-mell through the crowds. Despite the minor risk that a wayward arm might knock someone over, the presence of kids seemed to deter some of the most blatant of festival debauchery.

In fact, the whole event was downright friendly. Loads of people patiently waiting for foot traffic to work itself out, or offering space for someone to go ahead of them, suggested that the crowd was in attendance for fun, rather than frenzy. Adults casually drank beer in a tent which offered a pretty good view of the stage. Families napped on blankets and relaxed in lounge chairs in the shade.

A long line of vendors and food merchants trailed the river bank. Food vendors were likely to be community groups who get a budget boost through some festival vending. Add a few dozen clothes vendors, offering almost anything one could wear in tie-dye, camouflage or hipster black and chrome. Loads of reggae-inspired marketing was in evidence. I decided to buy some raffle tickets for a quilt to benefit a local school instead of a Bob Marley thong.

Heartfelt liberal politics were in effect. Encouragements to recycle and pleas for Obama were punctuated by an eloquent explanation of the devastation of dams on the Klamath River. The organizers kept the show moving, and there were barely gaps between bands long enough for much speaking -- most of the day was filled with music.

The Wailing Souls closed the show with a seasoned performance. Bass nudging the crowd left and right and crystal-clear percussion gave motivation to get down as the sunset cooled the crowd.

Reggae on the River was a return to the relaxed festivals of yesteryear. Benbow is a beautiful space, and when you add inspired musicians, a generous crowd and a great sound system you get some good times. Congratulations to the Mateel Community Center for a wonderful community-oriented and extremely fun event.