Reggae on the River Goes International 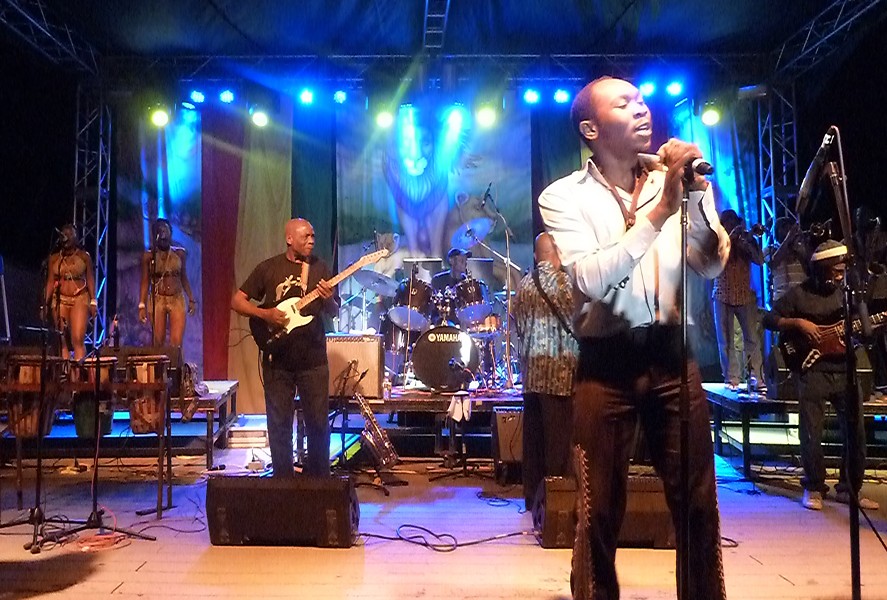 photo by Bob Doran Ishi Dube and the Redemption Band

Seun Kuti grew up in the liberated zone of Kalakuta in Nigeria. His father Fela Anikulapo Kuti had declared a small section of the city of Lagos to be an area where good music could be heard, cannabis could be smoked, dissident politics were welcome (so long as you didn't criticize Fela), and sexuality wasn't so controlled. Some obvious similarities exist between Kalakuta and the 27-year Reggae on the River concert tradition. At Benbow State Park July 17, headliner Seun Kuti brought this year's temporary autonomous zone celebrations to a head with his powerful Afrobeat orchestra: Egypt 80.

Kuti's set was groove central. Drumming anchored by an ever-present wood block player agitated the packed crowd to move. Add in a trap drummer, congas and a giant handcarved drum resting on its side on the stage and you have some sense of the percussive capacity. Backup singers, guitars and bass added their layers. The wall of horns in Egypt 80 provided the musical fabric and fantastic opportunities for solos including some juicy riffs by Kuti himself on saxophone. Kuti shimmied, boogied and undulated across the stage, leading chants and amping up the crowd.

There was no question that Kuti belonged in the headlining spot despite his last name not being Marley -- his performance was awesome. There has been a thread of openness to world music and polycultural musical exchange at previous regional reggae festivals. This year it was especially rewarding for many audience members who probably encountered great new music they had never heard before.

I offer up Zili Misik, who gave what I believe to be the best set of the weekend -- seven women dressed all in white playing funky Haitian-influenced dance songs. These women produced some great tunes influenced by the music of Haiti, Nigeria, Brazil and Cuba. The percussion was inspirational, the guitar sound was really strong (at one point it could only be described as 'shredding'), but the horns -- two young women who just scorched on the trombone and saxophone (also doubling on percussion) -- led the combo to new heights. They were really good, and I hope they get invited back.

Another notable set came at the hands of local roots reggae star Ishi Dube. The SoHum sun shined on the elegant singer as he crooned, chanted and sang to a massive and appreciative crowd. Backed by The Redemption Band, Ishi showed a diverse musical spectrum -- running through ska, lovers rock, roots and dancehall tunes during his quick set. Hard working, conscious and charismatic, Ishi's performance solidified his position as one of Humboldt's most vital local musicians.

Sila also gave a captivating performance. Led by the stylish Sila Mutunge on vocals, the band positioned trombone and saxophone against riveting electric guitar and a trap drummer who deposited some intense funk bombs while seemingly zoning out on the skyline. Their style was worldly jazz fusion with a Michael Jackson/James Brown-style dancing frontman. The combination was really powerful when the horns, guitar and vocals meshed to make waves of sound.

Roots reggae was well represented. Ky-Mani Marley and "Gramps" Morgan gave the crowd a show filled with reggae classics and did it quite well on the tunes I saw. Edi Fitzroy gave a lovely performance, playing dub-influenced smooth tunes. Bad Brains vocalist Human Rights (H.R.) gave an exceptionally mellow reggae performance with simple lyrics and effusive thanks for the audience in between each song. I caught two or three songs of Annette Brissett's set -- just long enough to wish I'd seen more.

Cool singer J Boog added a very smooth set. Somewhere between lovers rock and R 'n' B, but 100 percent enjoyable. Bushman not only had a great sound, but the guitar player elevated the sound of the Redwood stage during his set. Tony Rebel is a star, and always enjoyable to watch. He did some great tunes for the thankful audience, digressing into a couple of quick political discussions about Barack Obama and Sarah Palin.

One of the more bizarre moments happened early on Saturday as Jamaica's Perfect shared his quirky Rastafarian politics with the crowd. Dressed like Andre 3000 with a head wrap, shiny suspenders, tight pants and an oversized garish tie, Perfect cued up "Free Buju Banton" with suitable buildup while one of his posse modeled a Free Buju shirt. It seemed like a strange place to take a stand. Buju is, of course, the embattled gruff-voiced dancehall singer who is currently in jail for attempting to sell a federal agent more than five kilos of cocaine.

Aside from Perfect, most of the politics expressed from the stages at the festival were vague affirmations of love, family and Jah. Which makes sense. The shift to Benbow coincided with the return to a certain amount of family friendly community. There was a kids area, along with lots of kids, quite a few vendors, loads of food booths, and drinking confined to the beer gardens. Not to mention the shows had to end at 10 each night.

The two stages created an incentive to stroll, resulting in people wandering back and forth checking out the musical acts. The crowds were friendly and pretty low-key. Benbow is a perfect location for a small festival. The only downside is the 30 minutes at dusk when insects came in droves from the slow-moving river. When the mosquitoes rose to attack us, the people who bought floor-length Fozzie bear suits seemed pretty smart.

The 2011 version was a wonderful international Reggae on the River. The spirit of rebel autonomy mixed with mellow friendliness to make a very enjoyable festival. Kudos to the Mateel Community Center for its organizational work.