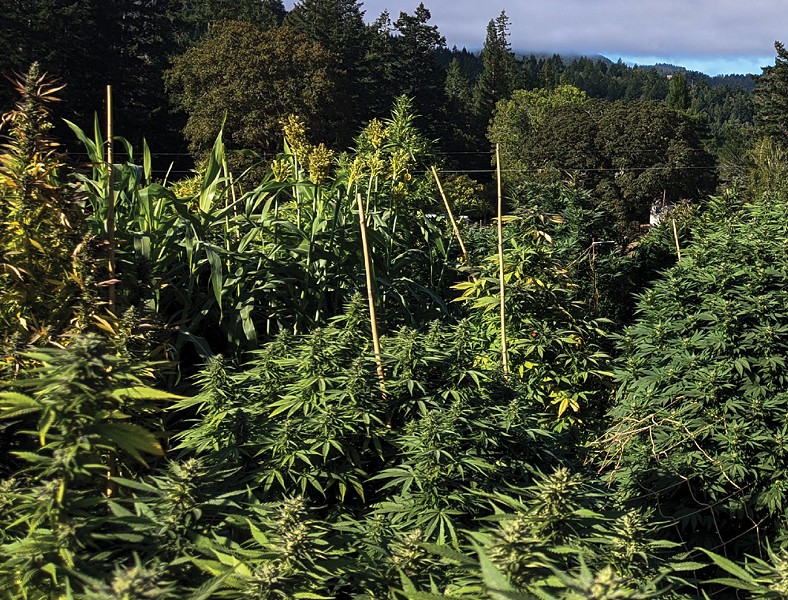 The long-feared mass extinction event for Humboldt County's cannabis farms might finally be upon us.

Ross Gordon, the policy director for the Humboldt County Growers Alliance, says while the county had 905 licensed farms on Oct. 27, only 721 remained as of Feb. 28 — a reduction of 20 percent in just four months.

The wholesale market, meanwhile, continues to crater, with a pound of outdoor cannabis currently wholesaling for about $300 — if farmers can even find a buyer — and that pound of weed also bringing a $161 state tax bill to the farmer. As the Humboldt County Board of Supervisors recently heard from a chorus of cultivators over the course of several public meetings focused on local tax relief, farmers are struggling, with many teetering on the edge of insolvency.

The challenges facing Humboldt County's cannabis industry are both formidable and well documented. The state's legal market has a massive oversupply problem, producing triple the amount of cannabis consumed, by some estimates. Meanwhile, roughly two-thirds of California cities have banned dispensaries and illicit markets continue to siphon customers, both with unlicensed weed grown in the Golden State and product flooding across state lines. And while 95 percent of Humboldt County's licensed farms are sun-grown or light-deprivation greenhouses, market analysis shows consumers overwhelmingly trend toward buying cannabis grown indoors, while increasingly moving away from flower toward edibles and concentrates. Rising gas prices also present a growing challenge for local cultivators, who already faced much steeper shipping costs than their counterparts elsewhere in the state.

It's a perfect storm that seems to show little signs of abating. And proposed state regulatory changes — while offering some promise — have fallen short on some of the relief local farmers hoped to see. Here's a quick rundown of what's being proposed in Sacramento and how it might impact Humboldt County's industry.

Changes to State Regulations: Earlier this month, the California Department of Cannabis Control unveiled a highly anticipated list of proposed changes to the state's current regulatory framework, with the aim to "streamline and simplify" the rules that have been in effect since 2018, when, as Gordon puts it, the state's regulated cannabis market was largely "theoretical."

Gordon, who also serves as policy chair at the Origins Council, of which HCGA has now become a regional partner, says the industry was generally more disappointed by what it didn't see in the regulatory changes than it was excited about any improvements.

First and foremost, in the midst of a historic drought and the aforementioned oversupply problem, the state did not give cultivators the option of letting their farms lay fallow for the year. Currently, state cultivation licenses — which run in the neighborhood of $12,000 for a 10,000-square-foot mixed light grow — must be renewed annually whether a farmer plants their crop or not, with failure to renew leaving farmers to forfeit their license and start the application process from scratch if they wish to grow cannabis again in the future. Gordon and others had hoped the state would offer growers the option of cutting back their square footage or even curtailing for a year at a discounted price, but it did not.

"It skews incentives," Gordon says, "and it's definitely a problem if we want to bring supply and demand into balance."

The proposed guidelines also modify the state's track and trace program, though not as substantially as cultivators had hoped. The proposal would still require growers to tag every plant that goes into the ground — a labor-intensive endeavor that Gordon estimates takes four or five people up to four days to do for a half-acre farm — though it allows farmers to weigh their total harvest in one batch as opposed to weighing plant by plant. Another favorable tweak is that the proposed regulations would provide an avenue for farmers to display their products at trade shows and events, offering small farms some added promotion and branding opportunities.

But mostly it seems hope that revamped regulations would significantly alter the landscape fell flat.

"These regulations are not going to fundamentally change anything," Gordon says.

The proposed changes are now open for public comment through April 19. (For information on how to weigh in or track the process, visit www.cannabis.ca.gov/resources/rulemaking.)

Senate Bill 1074: Authored by North Coast state Sen. Mike McGuire, this would provide the tax relief growers have been looking for. Specifically, the bill would drop the state's per-ounce cultivation tax entirely and replace it with an increased point-of-sale tax beginning in 2025. While the bill would alleviate a huge tax burden for small farms, it would also lead to the loss of hundreds of millions of dollars in state revenue. (Through the first three quarters of 2021, state cannabis taxes brought in nearly $1 billion, according to an article by NBC News.) A significant chunk — more than $400 million in 2021-2022 — of that revenue has gone to programs for low-income and at-risk children, and McGuire's proposal has drawn some backlash from service providers.

But with wholesale prices where they are, about half of what an outdoor farmer fetches per pound of cannabis is going to the state in taxes, Gordon says, adding that McGuire's bill would significantly help small farmers.

Assembly Bill 2691: North Coast Assemblymember Jim Wood, meanwhile, has introduced legislation that would allow small farmers — those cultivating an acre or less — to sell direct to customers at events like the Emerald Cup. Gordon says this could provide a huge boon to small farmers who are currently struggling to brand their products and gain a foothold in the market.

"It's really a way to promote craft cannabis and build a market around small batch, niche products," Gordon says, adding that with a "lack of understanding in the marketplace of some of the determinants of quality," small farms are left to ask, "How do we build a market for craft cannabis in a market that treats cannabis as a commodity?"

Wood's bill would give small farmers a presence at trade shows and events, offering them an opportunity to make their case directly to consumers.

Gordon says he and the Origins Council are continuing to inventory other cannabis bills introduced into the Legislature this year, but believes these to be the potentially most impactful ones for Humboldt County's farms. He pointed to McGuire's bill as the top priority, while noting that in Humboldt County, the industry is steadily losing farms.