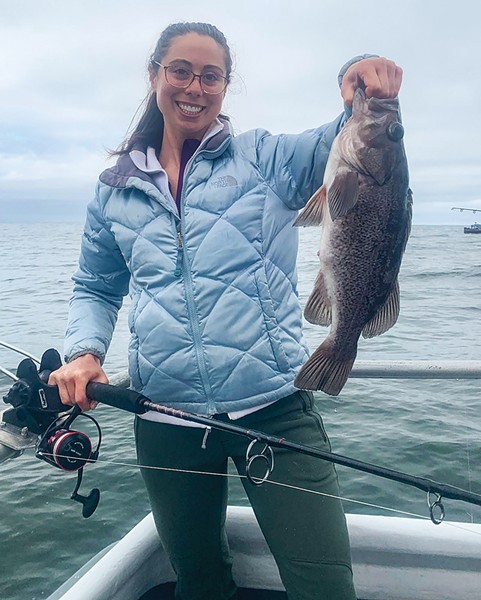 With an early closure of Pacific halibut and a slow start to our salmon season, the one steady fishery at the moment is rockfish. From Shelter Cove north to Crescent City, limits of quality rockfish and ling cod have been the norm. In a season with not much left to fish for, they've been a blessing. From charters to private boaters, it's refreshing to know that you can head to where they live and almost count on coming home with a bounty. For the boats that make a living on the water, it's been a godsend. With our salmon numbers on the decline and a halibut quota that doesn't seem to match abundance, rockfish has been the one species we can count on. The season in the Northern Management Area for boat-based anglers, which includes Del Norte and most of Humboldt County, runs from May 1 through Oct. 31, seaward of 30 fathoms (180 feet), and Nov. 1 through Dec. 31 rockfish may be taken at any depth. For a complete list of rockfish regulations, visit www.wildlife.ca.gov/Fishing/Ocean/Regulations/Groundfish-Summary#north.

According to Tim Klassen of Reel Steel Sport Fishing, no one has found the salmon as of yet. "The ocean hasn't been great, so there hasn't been much effort," said Klassen. "As far as I know, no one has really ventured south between the stacks and Trinidad. There's a lot of water that hasn't been fished yet, so we're holding out hope they're out there somewhere. We did find some really good signs outside of False Cape Rock a couple days ago. Tons of birds and bait and the water dipped to 49 degrees, but we couldn't find any keeper kings."

The rockfish bite north of the head remains outstanding for black rockfish according to Curt Wilson of Wind Rose Charters. "The weather has been a little chunky, but we did make it to Reading Rock a few days where we found a wide variety of rockfish and some nice lings," said Wilson. "A few salmon are being caught daily off of the lagoons in 100 to 180 feet of water. The crabbing is starting to slow down as the crabs are molting."

Salmon fishing has been pretty slow the last few days, reports Jake Mitchell of Sea Hawk Sport Fishing. "Boats are averaging about a half a fish per rod," said Mitchell. "Most of the effort is happening right off the point in 40 to 50 feet of water. The rockfish bite has really been solid all week as well. The black rockfish bite has been wide-open close to the beach."

Sport salmon season opened last Tuesday and there were a handful of salmon caught, including some bigger ones," said Britt Carson of Crescent City's Englund Marine. "There's a handful of salmon being caught daily, mostly coming from the south. The rockfish bite remains solid, with limits reported by just about everyone. The California halibut bite is decent, with guys tossing swimbaits off the rocks and the kayaks catching a few each day."

Rough weather has kept boaters in close while fishing for salmon out of Brookings, reports Andy Martin of Brookings Fishing Charters. He said, "Charter boats are getting a fish or more per rod, with some catching limits. Small anchovies trolled just below the surface are working best. Commercial boats are doing well offshore and a break in the weather could cause catch rates to jump for private boaters. Lingcod fishing is slow, but some are catching limits of rockfish near Bird Island and Twin Rocks. Halibut fishing is fair but windy weather is keeping boaters away from the most productive waters."

Spring-run salmon have been caught daily in the estuary since the July 1 opener. Fresh kings are moving in with the tides and starting to stack up as the water temperatures are over 70 degrees. Anchovies rigged with a spinner blade has been the top producer so far. The best fishing has been on the incoming and a couple hours after the high.

"Salmon fishing hit peak season form on the Rogue Bay last week, with many guides getting limits and private boaters also getting a fish per rod or better," said Martin. "Salmon are holding up in the bay because of warm water upriver. The fish are spread throughout the bay, with a good incoming tide bite. A few summer steelhead also are showing in the bay."