Humboldt celebrates the life of a peace activist, farmer and neighbor 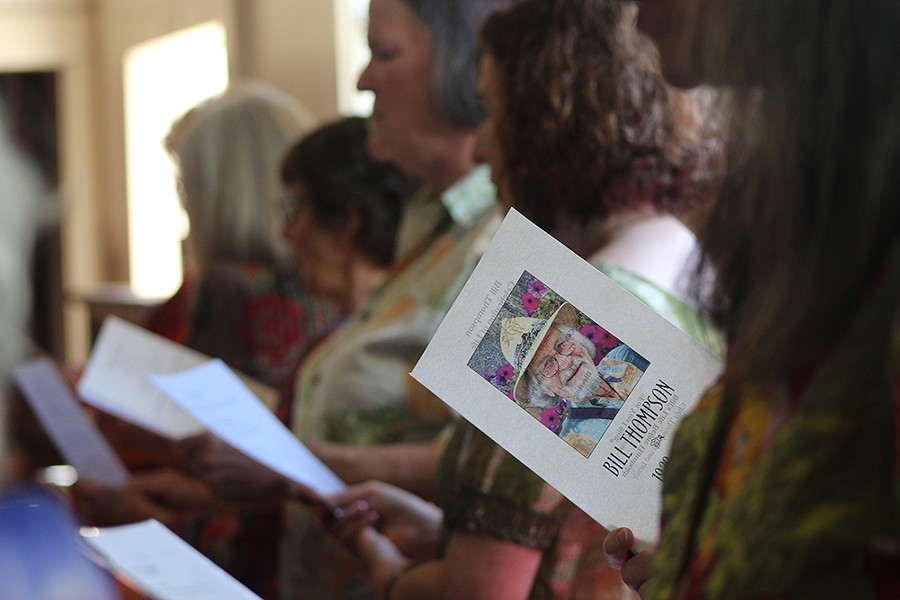 Photo by Natalya Estrada Friends and family gather April 26 at the Bayside Community Center to celebrate the life of Bill Thompson.

Bill Thompson was a man of love, compassion and a commitment to peace that never wavered in his later years.

Thompson graduated from Vista High School in Southern California and went on to earn a BA in economics at Knox College in 1951. He then served in the U.S. Army from 1951 to 1959 and, after being honorably discharged, studied at Stanford University for his MBA. He spent 24 years in Palo Alto elementary schools, where he taught fifth and fourth grades, and kindergarten.

"Bill was badly wounded in the battle at Pork Chop Hill in Korea," Rob Hepburn of Veterans for Peace said, describing Thompson's years during and after serving in the U.S. Army. "But then, amazingly, he went on to live a long life of empathy and passion."

Every Friday at noon since 1994, Thompson would stand in Arcata Plaza, part of a silent vigil in solidarity for all the victims of war. In 2005, he began to bring a bell to represent all people who were killed or hurt in different wars. These were his rallies for peace and justice, rallies that would inspire and encourage thousands throughout his years in Humboldt County.

Hepburn said he first met Thompson in 1991 at the founding meeting of Veterans for Peace Chapter 56 in Humboldt County.

"I remember that Bill paid for my first year of membership dues out of his own pocket," Hepburn said, recalling that Thompson was involved in numerous causes and groups, such as the Jacoby Creek Land Trust, Bayside Community Hall, 805 Men's Group, Redwood Roots Farm, Humboldt Unitarian Universalist Fellowship, Friends of the Arcata Marsh, Blue Ox Historic Village and Veterans Projects and Folklife Farm Vision.

A few years after founding Veterans for Peace's local chapter, Thompson participated in a 40-day fast on the Capitol steps in Washington D.C., calling for the closing of the School for the Americas, a U.S. Army center in Georgia that served as a training ground for the militaries of authoritarian, dictatorial regimes in Central and South America and was accused of exporting political violence. (The Pentagon renamed the center the Western Hemisphere Institute for Security Cooperation in 2000 after some of its graduates were implicated in human rights abuses and war crimes.)

Hepburn, when reached by phone, said Thompson was like a big brother to him and someone who genuinely cared for the community and welfare of others.

During Thompson's April 26 memorial, hundreds of people showed up at Bayside Community Center to honor and remember him and his many contributions. They were joined by the Threshold Choir, whose members sang multiple songs to celebrate his life and legacy within the Humboldt community.

"He delighted in walking on the sand and wet grass in his bare feet and was intrigued by the language of crows and magic of hummingbirds — which were his totem animal," his partner Jane Riggan said of him, her eyes twinkling as she held back tears. "Most of the time I was with him, he believed he was immortal. However, when his heart made it apparent that this was not the case, he graciously shifted gears."

Riggan's voice started to break as she continued to describe Thompson as the most gracious person she's ever known.

"No matter what he was wearing or doing, there was an elegant presence about him. In spite of that, he could also be silly and playful and would even roughhouse sometimes," she said.

Riggan was Thompson's partner for five years. Prior to that, he was married to his first wife, Maureen Lavendar Thompson, from 1952 to 1968 and they had five children: Chris, Cindy, Scott, Jay and David Thompson.

In 1989, Bill Thompson met June, his late wife, in Palo Alto. They married in 1970 and in 1986 moved to Bayside, where they quickly began working to protect the natural beauty of the Jacoby Creek Valley. Thompson helped found the Jacoby Creek Land Trust, which incorporated in 1992, and gave a conservation easement on a 10-acre parcel to preserve it as an organic farm.

He later terraced the yard of his home on Jacoby Creek Road into a 1.5-acre "Folklife Farm," envisioning it as a gathering place where people could share information about farming, sustainable energy, music and art while forging a spiritual connection with the aim of spreading love in the world, according to his obituary.

Thompson's son Chris spoke at the memorial about his father's love for family, friends and community.

"I know my dad was very well loved in this community, but I'm totally blown away," Chris Thompson said, reflecting on his father's history, where he was born — in San Francisco — and where he grew up — in Vista — and where he decided to spend the rest of his life — in Bayside.

"He played his guitar and sang every morning. He went from a warrior to a peace activist," Chris Thompson said, noting that his father, along with his late wife June, were involved in anti-nuclear marches, activism for which they were jailed several times.

Chris Thompson ended his remembrance with a quote he found on his father's desk after he died: "A thing is right when it tends to preserve the integrity, stability and beauty of the biotic community. It is wrong when it tends otherwise."

"And that's the way my father looked at life," Chris Thompson said. "Not just land, but with all of us."

Per the family, donations can be made in Bill Thompson's honor to the Bill and June Trust, Folklife Farm, 3084 Jacoby Creek Road, Bayside, CA 95524.

Natalya Estrada is a local journalist living in Arcata. She's frequently found with a chai latte, mic recorder and a smart pdhone on hand.