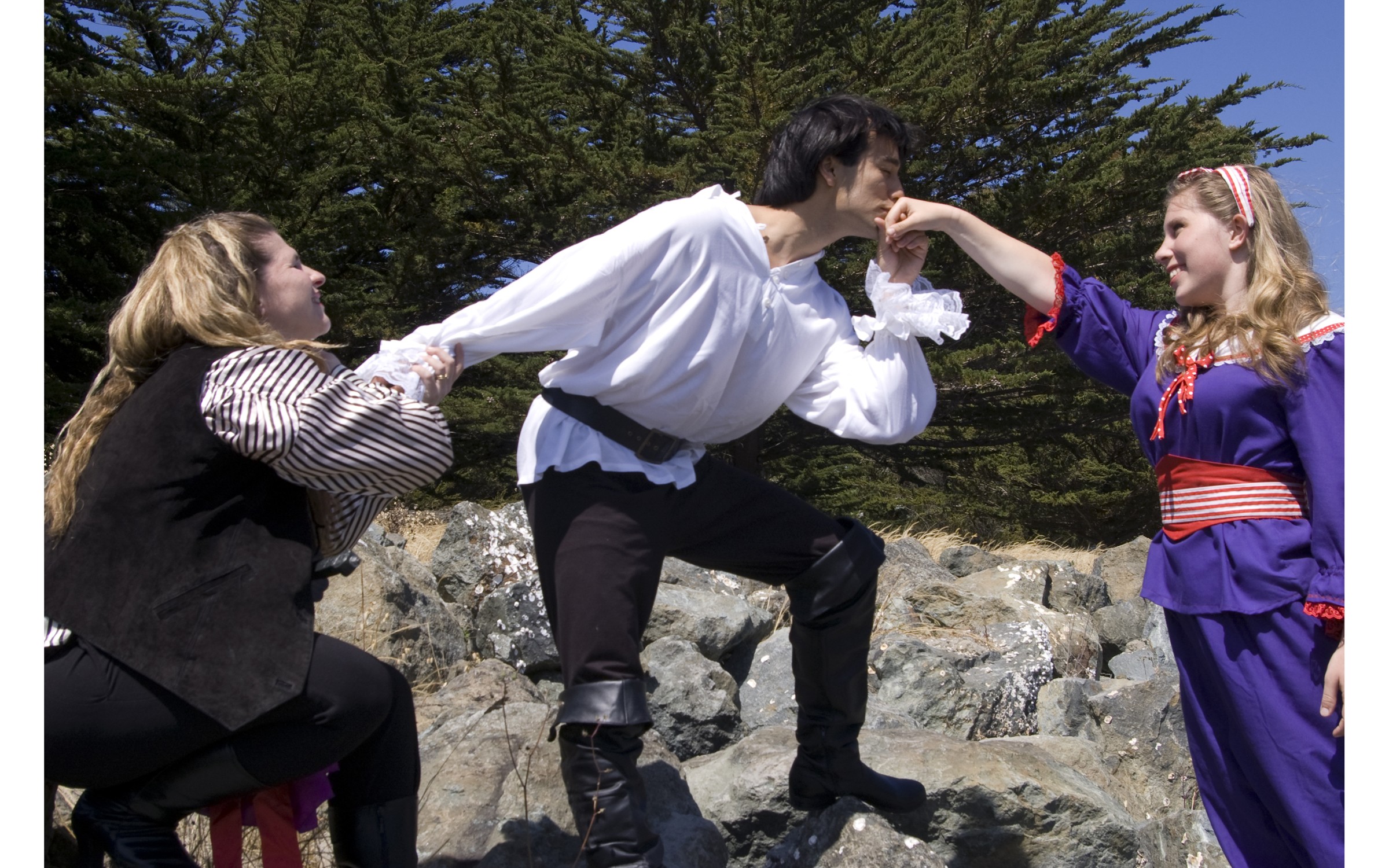 In 1879, Gilbert and Sullivan's comic opera called The Pirates of Penzance premiered, not in London, but in New York, arguably influencing the development of the American musical. A little more than a century later, Jonathan Larson's rock opera Rent made New York its subject and changed musical theatre everywhere. Outstanding homegrown productions of both shows are currently on North Coast stages.

Maybe it's the current affection for piratical affectations, or maybe just the prevailing local approach to musicals, but Humboldt Light Opera Company dispenses with the smirks and self-consciousness that can mar Gilbert and Sullivan revivals. Instead they present a buoyant, colorful and joyful Pirates of Penzance at Humboldt State's Van Duzer Theatre.

James Gadd and Fiona Ryder reunite (from last year's The Light in the Piazza) as the appealing skull-and-bones-crossed lovers. Bill Ryder as the stalwart Pirate King, the dynamic Cindy Cress as Ruth and Ellsworth Pence as the Major General are just the most obvious standouts in a huge and capable cast. The dances, especially those choreographed and led by Craig Benson, add another layer of delight. Musical direction by David Powell and Katri Pitts, the orchestra conducted by Justin Sousa, choreography by Shaelan Salas and sound by Justin Takata admirably support the local gold standard of singing. Carol McWhorter Ryder's wise direction, together with Jayson Mohatt's economical but elegant and useful set and lighting design and everyone involved in creating the colorful costumes, filled the Van Duzer with exciting clarity.

HLOC is a community theatre organization, but I doubt if you could find a professional theatre version of The Pirates of Penzance with as perfect a production and as winning a cast. They highlight all the humor, eternal and historical, with skillful song and dance, romantic and euphorical. They ply us with a plot that is at best fantastical, with certitude and grace, droll and enthusiastical. With audience in tow, they sail to this attainment. More ecstatic than dramatic, this is the very model of a modern entertainment.

I lived in New York City briefly in the 1980s, and visited frequently throughout the decade. I knew, talked with, worked with, overheard and interviewed dozens of artists (in theatre, painting, filmmaking, dance, writing, etc.) when conversations on the subject of survival (artistic and actual) centered on rent. It was when real estate prices and rents first shot into the stratosphere, and finding and affording a place to live became a much greater struggle than it had been for previous generations of aspiring artists. Rent was the defining item and the dominant topic -- until overrun by the savage plague of AIDS.

This is the context for Rent, with the East Village in the late ’80s as its focus -- a place of extremes, symbolized for me one afternoon by a block of derelict buildings along a street strewn with broken glass, with one parked car: a Rolls Royce in front of a new art gallery in a padlocked loft.

In the long genesis of Rent, Jonathan Larson combined the spine of Puccini's opera La Boheme and aspects of his own life with other cultural touchstones, especially common American holidays. Though its seams sometimes show, and I find the opera style (no spoken dialogue) a little too relentless for a piece this long and frenetic, it's an affecting theatrical adventure that has won establishment awards, popular success and a cult following.

It's clear even from down in the audience that the cast of the Ferndale Repertory Theatre production is very committed to the material and to each other. That adds an extra dimension to energetic and convincing performances. Kyle Ryan as the young songwriter, Christopher Hatcher as the aspiring filmmaker, Tiggerbouncer as the inspiring angel and Danielle Cichon as the troubled dancer carry much of the load, with major contributions from Joel Armin-Hoiland, Craig Waldvogel, Molly Severida and Elena Tessler (who has a tour de force number as the performance artist Maureen).

Guest director/choreographer Millicent Johnnie (from Southern Methodist University in Dallas) keeps the cast in constant motion. With scenic design by Daniel C. Nyiri, lighting by Patrick Sullivan and costumes by Gabriel Holman, the ambience is convincing. From my perspective, there were moments I felt I was watching ghosts.

At the same time, the tasty band (James Caton, Devin Galdieri, Justin Ross, Austin Schmalz and Jonathan Webster) and music directed by Nanette Voss served the story and the songs. The music (which mixes hip-hop and Who-style rock with a tango and some Warren Zevon howling) and the funny, trenchant and poignant lyrics make clear how large is the loss of writer Jonathan Larson, who died of a heart ailment on the eve of Rent's off-Broadway premiere.

Apart from for those who remember the ’80s, this show has universal appeal to younger audiences -- especially with the admirable energy, emotion and skill of this production.

Rent continues at Ferndale Rep Fridays and Saturdays at 8 and Sundays at 2 until August 29.