California's new tiered system and what it means for Humboldt

By Lauren Hepler and CalMatters

For Jill and Larry Cromwell, owners of Folsom's three Maribou Salons, the last six months have been a neverending series of financial nightmares. How could they pay $26,000 a month in rent with the hair salons closed due to coronavirus? Would they have to declare bankruptcy? What did it all mean for their three children, or the family house?

On Aug. 28, they got a glimmer of hope: Gov. Gavin Newsom announced that starting Aug. 31, hair salons and barber shops across the state will be allowed to reopen indoors with health precautions in place. It seemed like good news for one of the last states to reopen salons but Jill Cromwell and fellow salon owners were left scrambling to figure out how, exactly, they would be allowed to get back to work.

"It is completely confusing," she said. "To make schedules and find people to work, you don't just say, 'This is great and we'll be open in two days.'"

Under mounting pressure to address business owners like Cromwell, hundreds of thousands of laid-off California workers and parents weathering a chaotic back-to-school season, Newsom also unveiled a broader new tiered system to determine what is allowed to open and how in each county. It's not a full-fledged economic reopening, he said, but cases of the virus have fallen by about 40 percent since last month. Health and Human Services Secretary Mark Ghaly cautioned that the state is "not out of the woods" with an average 5,503 new cases per day.

The Aug. 28 announcement marked the state's latest attempt to walk a blurry line between public health and economic ruin for business owners and workers caught up in pandemic closures. While the first wave of the virus brought promises of business loans and increased unemployment checks, the need of small businesses is beyond what's available and state and federal politicians so far haven't delivered on a second round of longer-term financial relief.

"COVID-19 will be with us for a long time, and we need to adapt," Newsom said during a press conference. "You'll be now hearing a lot about tiers." 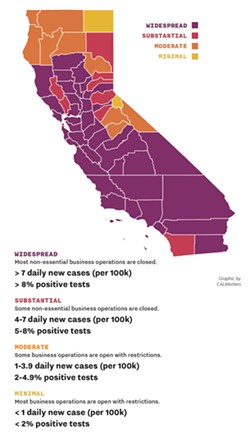 The new four-tier, color-coded system is a redesign of the state's previous county-by-county guidelines, which drew widespread criticism for reopening businesses too rapidly.

Hoping for a better statewide standard, the new framework allows for partial or more progressive reopening of businesses. Restaurants in a county that moves from a "purple" tier to "red" can reopen indoor dining at 25 percent capacity, for example.

It also eliminates some of the more burdensome requirements placed on counties to reopen more businesses. For instance, counties will no longer need to meet testing or contact tracing requirements to ease restrictions. Instead each phase will be solely based on case rate and test positivity.

In the hours after the governor's announcement, local officials and a range of industry groups were scrambling to figure out what would come next.

"We do not yet have the full clarity on the new tiers," the California State Association of Counties said in a statement, which Humboldt County officials echoed a short time later, saying it likely wouldn't be until Sept. 1 or beyond before they knew exactly what the new system would mean for local restrictions. (See sidebar.)

At the Professional Beauty Federation of California, attorney Fred Jones was trying to sort out whether the industry will be subject to a 25 percent cap on capacity that the state has specified for retail shops and malls in areas with the highest levels of infections. A document shared with CalMatters by the governor's office did not say that hair salons would be bound by such a cap.

The governor didn't give a reason on Friday for the reversal on hair salons and barber shops, but Jones had a guess after months of protests and a lawsuit filed this spring: "I think we have sufficiently beat the hell out of the governor in the court of public opinion," he said.

Ben Daidone is one of the many salon owners who fully reopened in California for a brief time between May and July after spending thousands of dollars on new plexiglass partitions and other health precautions. By this week, he was out of money to pay rent for his namesake Santa Monica salon of 30 years.

The situation had become dire, he said, after Newsom ordered a second round of business closures around the July 4 holiday as virus cases exploded. But the rules varied significantly from place to place. Bars and beach parking lots were closed, but not gyms. Restaurants were allowed to operate outdoors but not hair salons. At times, it's felt arbitrary for business owners like Daidone.

"We have adapted well," he said. "That is what's so confusing. We followed procedures, they worked and then we got shut down."

Any shift back to full service offerings indoors will be helpful for stylists, who rely on hair colorings and other more elaborate offerings to generate most of their revenue. But still at issue for Jones on Aug. 28 was a decision to keep outdoor-only mandates in place for nail salons and estheticians in hard-hit areas. They have the same state license as hairstylists, he said, and pose less of a risk to communities than big-box retailers and dentists allowed to stay open.

"It's because those industries are powerful," Jones said. "I think the health bureaucrats needed a sacrificial lamb to show that they were doing something."

Ana Ibarra contributed to this report.

CALmatters is a nonpartisan, nonprofit journalism venture committed to explaining how California's state Capitol works and why it matters.