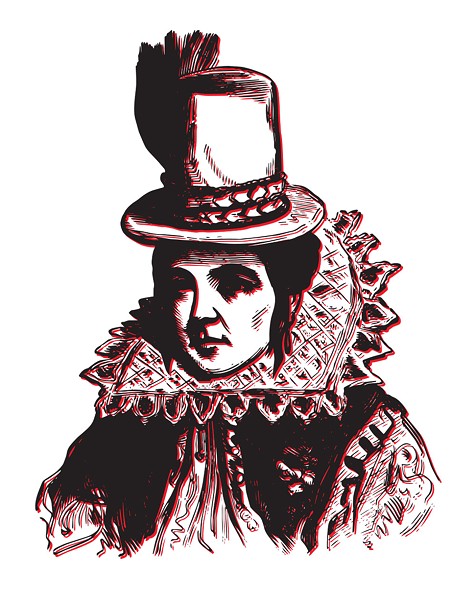 Shutterstock Illustration of Pocahontas circa 1596-1617.

Johnny Depp is likely not going to read this article. He's very busy. He owns his own island, after all, and imagine the upkeep on emptying his Roomba of all the sand it's collected from visiting guests traipsing through his island house without a care in the world. I honestly can't imagine Johnny Depp even understanding a Roomba let alone emptying it himself but that is beside the point.

I can imagine Johnny Depp waking up to his alarm (or to the person he pays to come into his room and gently draw the curtains while someone plays the flute in the corner so that Johnny can carefully open his eyes), heading to the bathroom, staring into the abyss while brushing his teeth and finally ending with a splash of Sauvage. It's a perfume, cologne, whatever you want to call it. It's a scent. It's also a derogatory term that was used to refer to Native American people in order to dehumanize them and justify their mass murder. Johnny Depp and Dior decided to make a commercial for Sauvage that features a Native person dancing while Depp plays the guitar. There's some nonsense in there about freedom or something, I don't know, I didn't really listen. All I know is that suddenly Native people had to get all up in the media, blogs, Twitter and hot-take think pieces just to say, "You know the word 'savage' is a really awful way to refer to Native people, right? Right?"

I feel like people want me to tell them why savage is a bad word. Some people might get picky with it and be like, "Well, actually, they were using the term sauvage, you know, like in French." Somehow that's supposed to make it better? If you look it up on Google Translate the direct translation seems to be "wild" but then you notice that the other words that Google uses to describe the translation are "savage," "brutal" and "ferocious."

I don't know, y'all, I'm getting kind of tired of having to explain things like why the term "Redskins" is a racial slur and shouldn't be a team name because it results in things like Native people being sneered at while they walk down the street in Washington, D.C., or being threatened when they attend sporting events. Or how about why Native mascots are racist and shouldn't be a thing because they actually cause damage to Native kids' self-esteem and self-worth while also causing damage to how non-Native kids see Native people, all which has been proven by scientific studies multiple times? Or how about why the term squaw is a derogatory term that refers to Native women as nothing more than dirty, worthless human beings? But you want to keep the name of your ski resort so ... cool?

Native people are not represented well, if at all, in media, pop culture, movies, or television. When was the last time you saw a Native person on a sitcom eating at the Cheesecake Factory talking about why every Native person we know likes the Golden State Warriors? (It's because they were the underdog for years! YEARS! And nobody thought they'd one day just start winning all the time. Winning at everything. Winning all the land back. Well, you get it.) How about the last time you saw Natives in the movies? It's Twilight, right? It's Twilight. How about in the newspaper? If you're honest you'll probably mention something about the 10 most wanted list or the newest arrest report.

Locally, most people hear about us when we are being arrested but nobody does stories about how this year Humboldt State University hired two local Native American women as full-time, tenure-track professors. Or that now HSU has the highest number of Native American women Ph.D.s in the state (I'm tempted to say the nation but I haven't finished the research on it yet). That's right, there are some badass things going on in Native country. You likely won't see it on major networks. You probably won't even see Native people joining the discussion as contributors on major networks. Instead, our issues are often represented by non-Native people and our voices are passed over for people who are not able to discuss the nuances of tribal sovereignty or self-determination, let alone truly understand why nobody needs Johnny Depp to reclaim the word "sauvage" for us.

Just this year, PBS launched a cartoon Molly of Denali, starring a young Alaskan Native girl. In one episode, Molly talks to her grandfather about how his boarding school forced him to stop singing traditional songs. Then she helps her grandfather try to sing again. And just about a month ago, the Center for Indigenous Politics and Policy developed an app that provides tours of Washington, D.C., focusing on Native American history.

And then Johnny Depp comes along and makes a commercial about some fragrance called Sauvage. And this is all people can talk about for days. And suddenly Native people have to once again explain why representation actually matters.

This is exhausting. I do it because I know it matters. If Native people can't even be portrayed or spoken about in popular culture as human beings, how are we going to be taken seriously in front of the Supreme Court or when we have to fight for the rights of our children, or when we have to fight for our fish and our water and land? Why is it that when I was on the playground as a kid, other kids were war whooping at me while I walked by, pulling my hair and calling me Pocahontas and spitting at my feet while they played Cowboys and Indians? These images stay with people and, as they grow up, they start to internalize that we are nothing more than savages.

Making Native people into savages was a part of the settler colonial structure to dehumanize us so that the ongoing attempts to eradicate us were considered justifiable. We had to be less than human. They made us savage through stories and portrayals of us in their media. Travelers' tales were pretty popular features where explorers would share how they had encountered islands full of cannibals and braved the stormy seas, only to discover far off lands with Native women who were 8 to 10 feet tall, or Native men who were lithe, super warriors. We didn't just throw tomahawks, we could throw them from miles away and hit you right between the eyes. Upon returning to Spain (or England or France or over that way somewhere) explorers would weave tales of bravery at the hands of these savages. It made for better copy. Suddenly they were going viral (and not just because they were probably recovering from scurvy). So the stories got bigger, more violent, more "wild, brutal, ferocious" or "savage."

One of the travelers' tales of the great savages of the "new world" we are most familiar with is Pocahontas. We all know it: She paints with all the colors of the wind, John Smith shows up and she likes him a lot, for some reason. Her savage dad gets all the rest of the savage guys together to try to kill him. But Pocahontas throws herself over John Smith and says, "No!" She saves him from the savages, who are her own people, with whom she grew up and played with when she was a kid, but I digress. In the end, John Smith invents a tale of savages and it lives on for years and years. In fact, John Smith didn't actually include the story of Pocahontas in the first publication of his travels to the Americas, instead he issued it as a footnote much later, when Pocahontas came to England and became the talk of the town. Smith convinced his editor to reissue the book with the Pocahontas story added. It became a best seller.

Tales of savages from far off lands sold better than the ones where Native people were inventing democracy, living in well-organized cities, utilizing scientifically advanced methods of burning and botany, and taking such good care of our children that early missionaries wrote we "loved our children to excess." Not to mention teaching people how to grow corn. Nobody wants to read "I went to the Americas. I couldn't figure out how to grow corn. Native people taught me how to grow corn. Oh, they also helped me find clean water. Eventually they reached out and asked for us to negotiate the best way to live peacefully together. They will often wave to me when I go by on my horse."

Nobody is gonna buy that book.

So we remain savages because it is part of the American story, it is what we are taught to internalize in books, movies and media. You can still go to a store and buy a racist caricature of us, complete with red skin, dopey eyes, oversized teeth and a feather in his headband, called "Chief Wahoo." Kids could probably wear him to school without a problem. You can still turn on the TV and root for a dictionary defined racial slur team and watch as their loyal fans dress up in costumes and war whoop or pretend to tomahawk chop. They called us "Redskins" because it was the color of our skin after they scalped us so they could sell our scalps for money. They called us savages because it would justify their actions. They told stories about us like we were less than human.

But our stories are about resistance, resurgence and badass MMA fighting congresswomen, reconnecting with our grandparents, fighting for future generations, building pathways for our fish, our children and our more-than-human relatives to thrive. It's time to represent our stories, our voices, our insights, our languages and our words for ourselves. In most of our Indigenous languages, our terms for ourselves translate to "the people." "Who are you?" someone asks. "What is the name of your tribe?" Our word usually translates to "We are the people. We are people, human beings." It's how we have represented ourselves since time began. It's about time for the media to catch up.