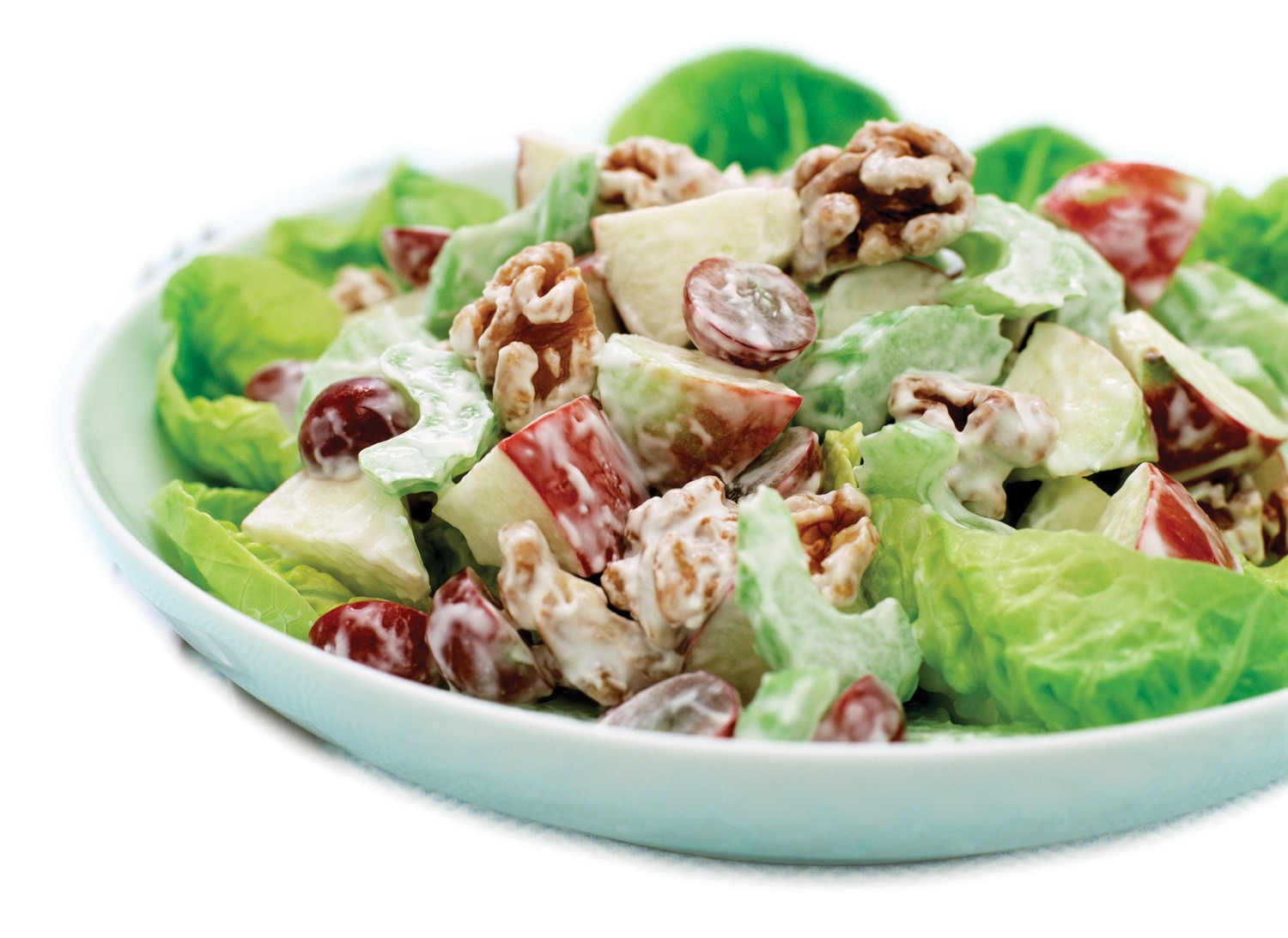 Salad at our house in the 1950s was iceberg lettuce with bottled "French dressing." Seasonally, tomato wedges were added. On special occasions we slathered on Thousand Island dressing, an awful-but-addictive concoction of mayonnaise, catsup and sweet pickle relish, a highlight of childhood memories of vegetables.

Mine was the age of Betty Crocker mixes and frozen foods, where food was something to be taken care of by Progress. The kitchen of the future would be programmed to make dinner. This was the world before Julia Child, when even Romaine was exotic, something you got in hotel dining rooms: "Hearts of Romaine Lettuce with Blue Cheese."

Mama didn't like to cook, but for company, there might be another filtered-through-the-fifties famous dish, Waldorf Salad, with Best Foods mayonnaise straight from the jar, served on a lettuce leaf. (Iceberg, of course. What else was there?) Created at New York's Waldorf-Astoria Hotel in 1896, the original version of Waldorf Salad contained only chopped apples, celery and mayonnaise (walnuts were added later). An inspired combination, I think.

The mayonnaise referred to, however, is not our supermarket kind, but sauce mayonnaise, a flavored emulsion of olive oil and egg yolk. This is something most people have never tasted, and it's an entirely different genre. You can make it at home, with practice, better and cheaper than Best Foods. Except who would have done that back then? And even today, as Wikipedia notes, "Mayonnaise made this way may taste strong or sharp to people accustomed to commercial products." Indeed.

The Waldorf was a forerunner of a largely forgotten meme of the ’50s, the chopped salad. (Mama didn't make these -- they were labor-intensive, and she regarded cooking as one of the endless checklists of the household, along with vacuuming and laundry.) These concoctions were particularly popular for ladies' luncheons, but they showed up at festive occasions, pot-lucks and picnics. They were characterized by uniformly sized fresh raw and canned vegetables bound by a thin mayonnaise. A typical recipe would be head lettuce, tomatoes, cucumbers, bell peppers, celery and green onions.

Food blogger Sally Schneider recalls, "My mother used to make a chopped salad that was on the menu at New York's glamorous 21 Club: a dice of carrots, celery, cucumbers, tomato, onion and peppers tossed with Russian dressing and, like a wonderful prize in the midst of it all, little bits of American cheese."

Those are "glamorous" exceptions. They are not the reality of ’50s food in the U.S. No wonder people my age remember being told, "Eat your vegetables," like it was a dreaded duty. It was! Aside from tomatoes, what comes to mind are frozen peas and carrots, mushy green beans and squash, and canned goods. I actually was fond of canned spinach; when I first tried frozen, it tasted bitter. I would be 20 years old before I discovered what fresh spinach tasted like.

But millions of us shared the post-war boom of "ready-to-heat-and-serve," and if we're honest with ourselves, it didn't really much matter to us. Kids will, if necessary, eat what adults eat.

So chopped salad was really a kind of middle-class attempt at food that used fresh, mostly raw ingredients, slathered with mayonnaise -- to get families to eat it. It was a great boon to Miracle Whip, a sweet mayonnaise that had full-page spreads in The Ladies' Home Journal the year I was born.

1950s-era chopped salads could be both wonderful and awful to behold. (Think about miniature marshmallows suspended in cubes of artificial-lime Jell-O.) Remember "Ambrosia?" Not a single fresh ingredient!

Where to look for early chopped salad recipes? The formidable Joy of Cooking (Rombauer-Becker) devotes 200 entries to salads, but seems never to have heard of this poor relation.

A chopped salad includes ingredients that have been, yes, chopped to be uniform, usually 1/4 to 1/2 inch cubes. It may be garnished with things like shredded or crumbled cheese, hard-boiled egg, or bacon. Typically drizzled with dressing before it is served, it's either tossed to integrate all of the ingredients, or left in a composed form, in which case the ingredients may be artfully arranged to create stripes or other color patterns.

One crucial thing about a chopped salad is that it contains fresh produce. But too often, a random assembly of raw vegetables, refugees from the crisper drawer, exude moisture that turns the salad flabby and bland.

One solution is to remove water from ingredients beforehand, for example salting and draining. Cucumbers and tomatoes are the worst offenders. Standard cukes should be peeled and the seeds removed (but they are wonderful blended in gazpacho!) before salting; Armenian and English varieties are less seedy. Ripe tomatoes are impossible in a chopped salad. Halved cherry tomatoes can work, if drained. The object is to have as little leaking moisture as possible while the salad waits.

Chopped salads are more successful using blanched vegetables. To blanch, boil heavily salted water in a pot, and use a sieve to hold them in the water 'til cooked, then plunge into ice-water. Vegetables that respond well to blanching include fresh beans, peas (not pea pods), young carrots, cauliflower and fennel.

Raw or dried fruits, avocados, canned or pickled vegetables -- all are useful without further processing. The best lettuces are not the beautiful heirloom varieties but good old iceberg and Romaine, which hold their shapes when chopped.

Finally, the dressing is unlike other salads: Moisture is not your friend. Mayonnaise-based and cheese dressings are good, but caloric. An easy piquant dressing can be made by whisking good Dijon mustard with virgin olive oil and balsamic or sherry vinegar, salt and pepper, possibly a touch of cream. Or try using yogurt in place of some or all of the mayonnaise. Traditionally, the dressing is poured on top, and the entire bowl is refrigerated for an hour before tossing and serving.

I very much doubt that Julia Child ever ate chopped salad, much less made it. Still, as the woman who rescued American cuisine from "Ambrosia" might have said, "Bon appétit!"