Hustlers delivers all the glitter, some of the grit 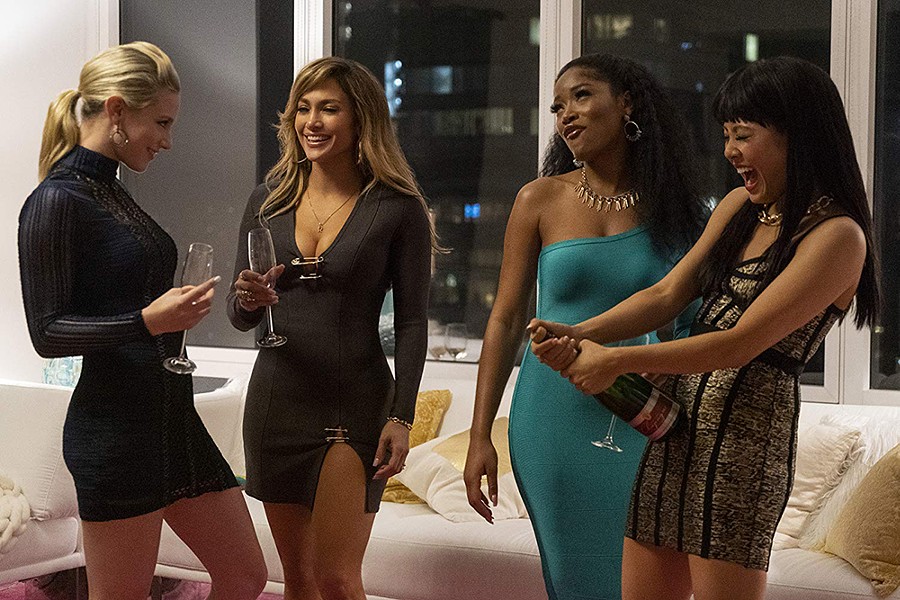 HUSTLERS is not a perfect movie. Of course not, such a thing does not exist. But it is a timely, important and overall very good one, and for that I guess I wish it could hit all the invisible, impossible marks required for greatness. Maybe I should be satisfied that it has managed significant financial success while also exploring a subculture within a sub-economy (dancers at a prominent New York City strip club frequented by the pustulant vampires of the financial "industry"), while also boasting a female-dominant ensemble and a woman's name on the writer and director lines of the credits. Things to be grateful for; maybe I shouldn't sweat the small stuff. But it is in the small stuff that Hustlers comes so close to telling some new truths, or at least airing them out in a new way for a wider audience.

The narrative is framed by an interview conducted by Elizabeth (Julia Stiles), a journalist preparing a story about a group of dancers who got themselves into some legal trouble in the not-so-distant past. (The movie is adapted from Jessica Pressler's New York Magazine article "The Hustlers at Scores" and based, obviously, on real events). Her subject, Destiny (Constance Wu) sometimes goes by Dorothy, depending on who is addressing her, and worked on and off again in a number of strip clubs in the city throughout the mid-early 2000s, with limited success.

Flashing back to 2007, we see Destiny at work, a little awkward and anonymous in the cavernous club. One night, though, she watches Ramona (Jennifer Lopez) demolish the stage, leaving it hushed and carpeted in dollar bills. She's immediately awed and enamored, which is understandable: Ramona is a force, confidence embodied, she commands all eyes in the room. Perhaps too conveniently, Ramona decides to take Destiny under her wing, to show her the technical ropes, the art of reading people and, of course, how to get the real money. The alliance is a remarkably successful one, with Ramona's cutthroat acumen and the pair's combined sex appeal enabling them to home in on big fish Manhattanite clientele — you know, the scum of the Earth. They're making more money than Destiny thought possible: She's living well, paying off her grandmother's debts and having a good time doing it. But then 2008 happens.

The financial crash guts attendance at the club, with the bulk of the Wall Street bottom feeders having fortunately lost much of their expendable income (though lamentably not their freedom or, I suspect, their collective arrogance). Destiny ends up in a long-term, if not particularly stable, relationship and before long has a daughter. Her attempts at entering the straight workforce are unsuccessful, though not for lack of trying. And so she finds herself back at the club, a single mother with negligible financial security going back to the only job she's ever really had. The realities of a recession economy being what they are and strip club owners being what they often are (read: shady, sleazy, misogynistic), Destiny enters a workplace redefined. The measures previously in place to protect the dancers have been removed and most of the women she formerly knew have been replaced with Russians selling sex in the champagne rooms. The seediness and criminality that have always loomed at the edges of strip club culture have subsumed it, leaving Destiny feeling out of place, out of options and shamed by the exigencies of her desperate situation.

At which point, through some twisted, dubious stroke of luck, Ramona re-enters her life. Real life fell on her for a while, too, but she has rallied, albeit by questionable, if justifiable, means. Destiny jumps in on her grift, which at first seems relatively harmless. Everybody's got a hustle, after all. Ramona gathers Destiny and a group of other dancers together, building a family and a thriving business within which everyone can flourish. They're targeting marks, sure, but haven't they been targeted? And aren't they only coaxing money out of the wallets of guys who can afford to lose it? Well sure, kind of and, ultimately, not really.

As the scam continues, it becomes unwieldy and ultimately uncontrollable, but Ramona revels so much in her queenpin/mother-of-the-pride role that she cannot or will not acknowledge the entropy. As the group starts tilting into outright criminality, she continues to bring home strays, women with questionable loyalties, addiction issues and little to lose.

Loren Scafaria wrote and directed Hustlers, and did so with significant style and nuance. The camera moves, the long dolly and Steadicam shots, are more ambitious here than in the vast majority of mainstream movies on offer. And it's clear in the writing that she cares about the characters, about giving them real life. The script is funny and sad and feels generally true to life. But, like her debut feature Seeking a Friend for the End of the World (2012), it shies away from some of the harsher stuff just when it seems primed to confront it. To be clear, I very much enjoyed both movies but by the same token both left me wanting something deeper and darker. It may be in service of accessibility, especially in the case of Hustlers — hard to say. Like Lopez's lead performance, though, Hustlers ends up feeling a little like an A-lister going slumming. It's pretty, entertaining and maybe a little dangerous, but it never feels like it's working without a net. R. 109M. BROADWAY, MILL CREEK.

BRITTANY RUNS A MARATHON. Jillian Bell plays an unhealthy, hot mess trying to get her act together, starting with running. R. 104M. BROADWAY.

THE MALTESE FALCON (1941). Humphrey Bogart on the trail of the original angry bird. NR. 100M. BROADWAY.

OFFICIAL SECRETS. Keira Knightly and Matthew Good about a woman who blew the whistle on the intelligence manipulation that led up to the Iraq War. R. 112M. BROADWAY.

TIGERS ARE NOT AFRAID. Issa Lopéz's supernatural horror about kids in the crossfire of a cartel war. NR. 83M. MINOR.

DORA AND THE LOST CITY OF GOLD. Teen Dora (Isabela Moner) goes exploring to save her folks. With Danny Trejo and Benicio Del Toro. PG102M. FORTUNA.

GIVE ME LIBERTY. A comedy about a road trip to a funeral with a Russian boxer, some senior citizens and a young woman with ALS, whose medical transport is taken over for the ride. 110M. MINIPLEX.

THE GOLDFINCH. A boy who's orphaned by a bombing at MOMA impulsively steals a painting from the rubble. Starring Nicole Kidman, Finn Wolfhard and Sarah Paulson. R. 149M. BROADWAY, FORTUNA, MILL CREEK.

THE LION KING. An impressive CG remake with a star-studded cast, but all the technical achievements and orchestrated moments lack a little life. Starring Donald Glover, Chiwetel Ejiofor and Beyoncé (please don't tell her we didn't love it). PG. 118M. BROADWAY.

PEANUT BUTTER FALCON. This moving, funny story of a pro wrestling hopeful with Down Syndrome never condescends to its characters or its audience, and Shia LaBeouf, Zack Gottsagen and Dakota Johnson give deceptively natural performances. PG13. 95M. BROADWAY, MILL CREEK.