Restoration in the Redwoods 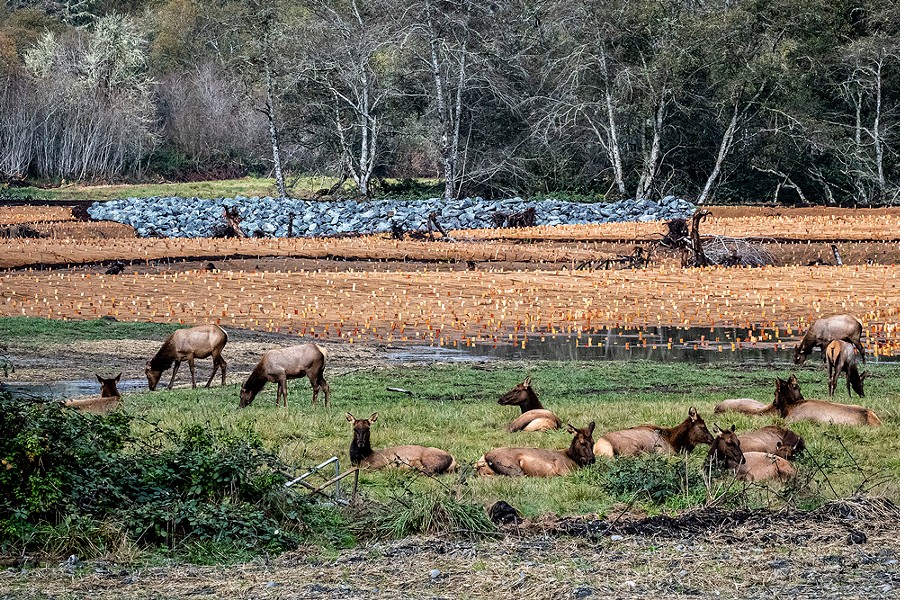 Photo by Mark Larson This large herd of Roosevelt elk, uninvited guests to the open house, occupied restored floodplain habitat along the future new channel of Prairie Creek and organizers had to re-route the planned guided walk.

Photo by Mark Larson Mary Burke, program manager for the North Coast Region of California Trout, pointed out project goals of creating 800 feet of a new channel for moving Prairie Creek away from U.S. Highway 101, restoring 18 acres of riparian and wetland floodplains and building a backwater pond to provide a slow-water refuge for juvenile salmon and steelhead.

Photo by Mark Larson Attendees at the open house were invited to join a guided walk across the restored Orick Mill Site area (compost heap on the right) and onto an old logging road that will become part of the Coastal Trail.

Photo by Mark Larson This sign greeted visitors to the Redwood National and State Parks Gateway & Restoration Project Open House and explained the importance of the restoration work on Prairie Creek to young salmon and steelhead in this area before they head downstream between levees on both sides of Redwood Creek.

The 125-acre Orick Mill Site is under new management. Located on Yurok ancestral lands north of Orick on Bald Hills Road, not far from U.S. Highway 101, the site's logging decks used to hold massive old-growth redwood logs. On Saturday, during a timely stoppage of rain showers, the Redwood National and State Parks Gateway and Restoration Project Open House welcomed visitors without a problem — except for the uninvited wandering Roosevelt elk herd that showed up and blocked part of the planned walk to show off the restoration of Prairie Creek and the floodplain.

Now almost free of any evidence of lumber-mill activity, the former mill site was purchased by the Save the Redwoods League in 2013. During the open house, the public was invited to enter the property to view the progress after removal of buildings, as well as acres of asphalt and concrete, the creation of new trails and the restoration of Prairie Creek and adjacent floodplains. Hosts for the open house, guided walks, a free lunch and a mix of activities included Save the Redwoods League, the Yurok Tribe, California Trout, the National Park Service, California State Parks and the Coastal Conservancy.

As visitors entered what will soon be the "southern gateway to Redwood National and State Parks" along Bald Hills Road, we parked in what has been an active two-year de-construction zone of acres of asphalt and concrete in the five-year, $25 million project. Our eyes immediately went to a wide swath of restored flat ground covered in straw on the right that extended all the way to the redwood forest in the background. On the left side were a huge pile of ground-up asphalt (soon to be given to Redwood National Park to re-use) and a giant Stonehenge-like stack of concrete slabs (also soon to be recycled by a concrete construction firm).

A short walk brought us to the event tent area, where staffers from the Save the Redwoods League introduced us to a set of visuals explaining project goals for the site's transformation, before inviting us to go on the guided walk with Mary Burke, program manager for the North Coast Region of California Trout.

One goal of this project is to provide a "southern gateway" destination closer to the RNP area with lots of parking (reducing pressure on the crowded parking area for the Lady Bird Johnson trailhead, for example). Plans include Yurok village programs, a pedestrian plaza, access to the Coastal Trail and the new Centennial Trail connecting to the Lady Bird Johnson Grove. Hinted at was the possibility of a new RNP visitor center being built here someday to replace the existing one west of Orick that sits in a tsunami zone.

The other main goal of this project is creating 800 feet of a new channel for moving Prairie Creek away from U.S. Highway 101, restoring 18 acres of riparian and wetland floodplains, and building a backwater pond to provide a slow-water refuge for juvenile salmon and steelhead. On a guided walk with Burke, a large group passed huge stacks of slash on the left and plant compost on the right before walking on an old "super highway" logging road. That road will eventually be restored and become part of the Coastal Trail.

Burke first stopped by the rough beginnings of the Centennial Trailhead that will connect with the Lady Bird Johnson loop trail. We then passed by a former small reservoir area that was historically used as water supply for on-site housing and paused to look over a massive, oddly shaped old-growth redwood tree — left unlogged due to its poor lumber potential. We next turned downhill onto the floodplain next to Prairie Creek and found ourselves looking over a large fenced-in area that had been cleared of invasive plant species, covered in matting and replanted with native plants, as well as a recently dug-out backchannel and pond that connected to Prairie Creek.

When Burke was asked what was being fenced in — or out — she laughed and said the intent was to keep the elk out to prevent them grazing on the new native plant seedlings. But the elk had quickly found their way into the area through an unfenced gap next to the creek. The fence, with its one-way exit gate for the roaming elk, will soon be removed.

We headed back to the free lunch, fish-shaped cookies and drinks and checked out the park service stream erosion display and the massive drone used by the Yurok Tribe Fisheries Design Construction Program. Before leaving the site, we wandered around looking at the restoration work done by the Yurok Tribe Construction Corporation on the acres and acres of what used to be asphalt and concrete.

As we left, volunteers and staffers invited us to return in 2026 to see the finished project, after which Save the Redwoods League will transfer the property to be managed by the Redwood National and State Park Services.