With a master builder and traditional methods 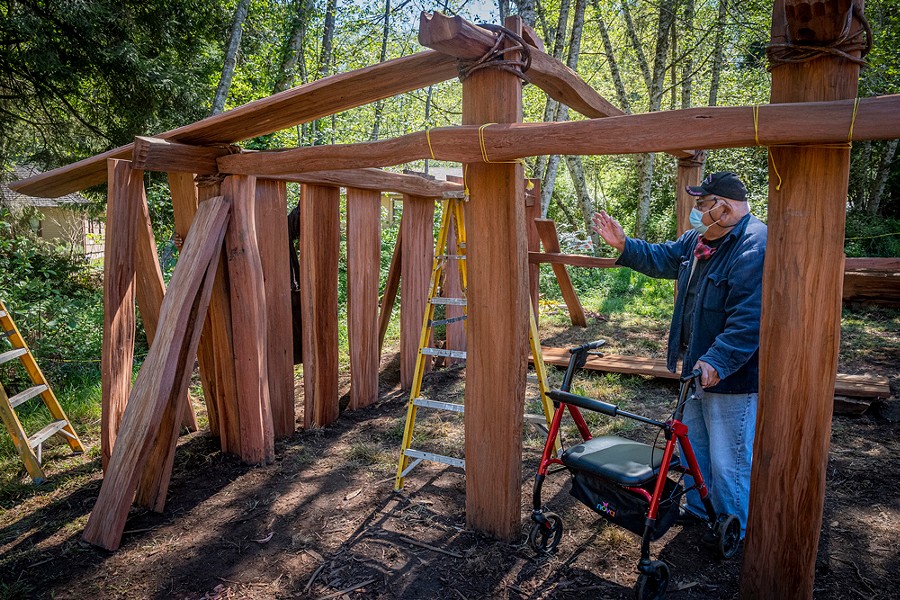 Photo by Mark Larson Master Builder Walt Lara occasionally moved inside the framework of the women's Dressing House under construction to offer advice to a crew member.

Photo by Mark Larson The restoration work underway revealed the massive redwood beams inside the Family House located at the south end of Sumeg Village. Please respect the caution tape on site.

A hike at Patrick's Point State Park north of Trinidad always appeals to me, given park access to Agate Beach, Ceremonial Rock, Wedding Rock's ocean viewpoint and the excellent Rim Trail. But if you go now, you can see work being done at Sumêg Village by a crew of Yurok Tribe members using traditional methods to restore the replica Native American structures and build a new women's Dressing House.

Seeing the beautiful, freshly split planks from old growth redwood logs and traditional construction methods (no nails) being used are my favorite parts of visiting the site. In addition, I had the privilege of meeting Yurok elder Walt Lara.

To find Sumêg Village, walk on the signed trail, located to the right of the Visitor Center near the corner of the parking lot, to the recreated village and a native plant garden. Sumêg Village was not built at an actual archeological site in the park and was intended to be a demonstration project when it went up in 1989. To view the restoration work in progress, respect the yellow caution tape and avoid interfering with the construction activities and workers on site Monday through Thursday from 7:30 a.m. to 4:30 p.m.

The last time any restoration activity occurred at Sumêg Village was in 2004, with a crew led by Yurok tribal member Axel Lingren, according to Greg Collins, supervisor of the Cultural Resources Program and district tribal liaison for the California State Parks' North Coast Redwoods District.

It was time for restoration work at Sumêg Village to begin again, said Collins, because years of contact with wet soil and lack of maintenance due to lack of budget had led to rotted posts and wall and ceiling planks. The new women's Dressing House was part of the original Sumêg Village plan and is needed as a place for women dancers to change into their ceremonial regalia.

Collins hired 86-year-old Yurok tribal member Lara as master builder for the current restoration project. "I had participated in the original Sumêg Village construction that was led by Dewey George, Jimmy James and others," said Lara. "With this current project, I'm trying to pass on what the old folks passed on to me. I was around 10 when I started learning how to build with traditional techniques, helping my grandfather with a small cabin at the mouth of the Klamath River." Lara spent much of his working life in the woods working for local timber companies and the Yurok Tribe.

At this year's Humboldt State University commencement, Lara is slated to receive an honorary Doctorate of Humane Letters during the College of Professional Studies ceremony. 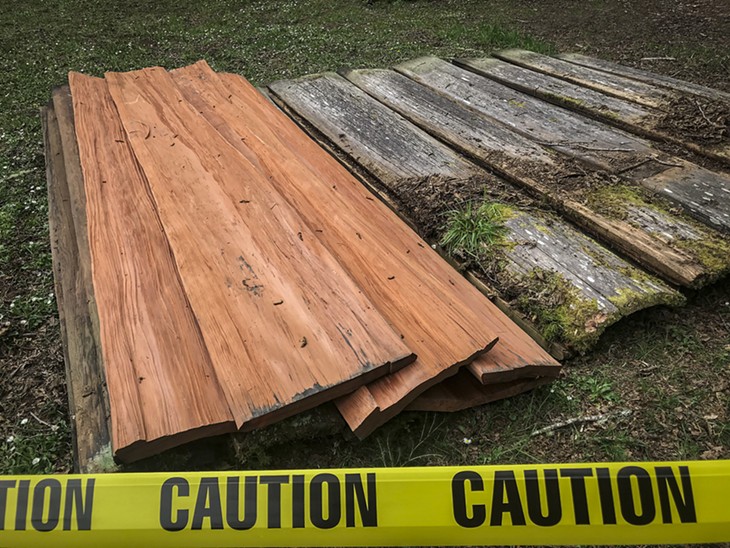 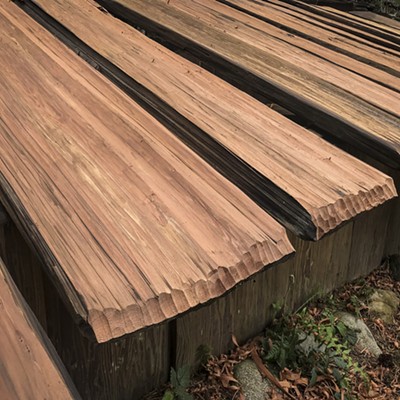 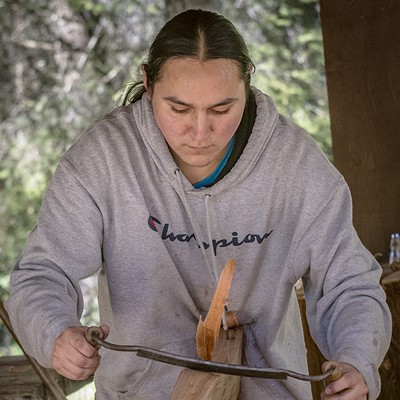 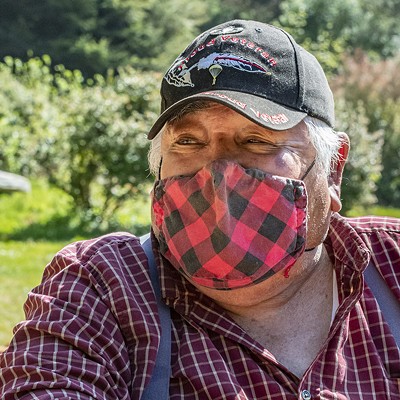 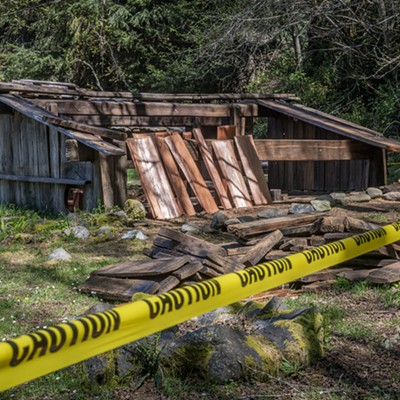 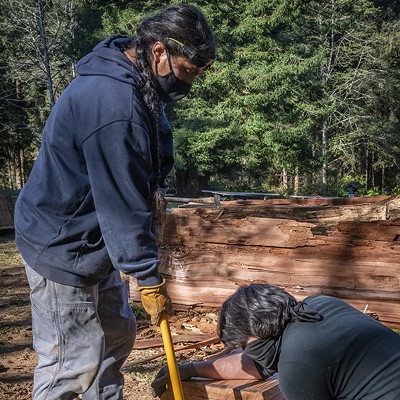 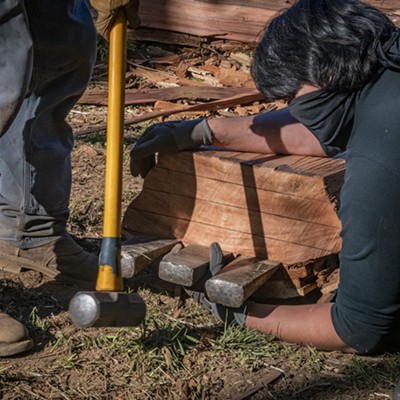 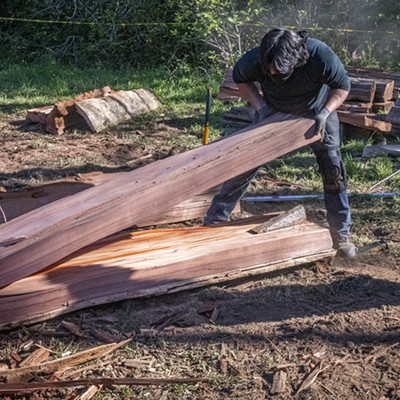 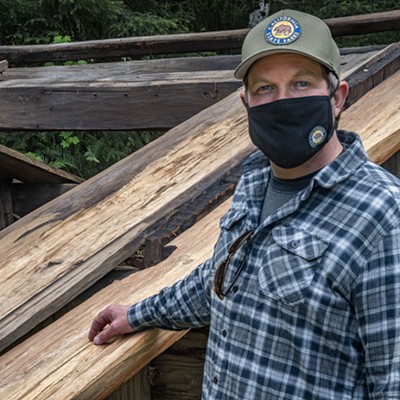 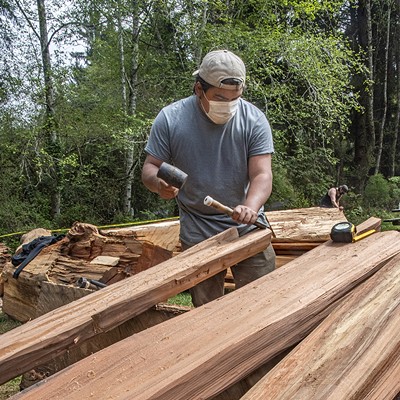 As master builder, Lara is passing on his knowledge of traditional materials and construction techniques to his much younger project team consisting of Yurok Tribe members from the Yurok Trail Crew (co-team leaders Michael Wolf and Napooi Shorty, Ro-tah Shorty, from Crescent City, and Owen Pretor, of Klamath, as well as senior park aide Jake Reed, of Hoopa and McKinleyville. "We hired Reed to add to the Yurok Trail Crew because he had apprentice experience working with Walt on a recent Weitchpec restoration project," said Collins.

"My favorite part of the project has been watching the boys do the work," said Lara. "They're a pretty good crew and it's important that traditional people are here doing it."

The team began the 10-week project on March 29. The early start time each day has meant some travel challenges for the Yurok Trail Crew members from Crescent City. "I'm up at 5 a.m. to eat breakfast and be picked up at 6 a.m. by our driver, Napooi," said Michael Wolf. "We've also had delays at the Last Chance Grade slide along Highway 101, making it difficult some days to get here by 7:30 a.m."

Ultimately, usable logs for the project came from trees that had fallen across roads on park land in the North Coast Redwoods District, said Collins.

"The best part of my job has been working with Walt," said Collins. "It's cool to see young Native Americans learning traditional skills from an elder. I'm amazed at how the tribal trail crew members learned very quickly to create split-board product out of the old growth logs."

"In addition, the good news is that Sumêg Village is now taking on a life of its own as a real cultural place with local Native Americans practicing their ceremonies here," said Collins.

The last part of the project includes restoration of the sweat house, located inside a locked fence that is accessible only for traditional use by tribal members.

For more information about the history of Sumêg Village, you can watch a video about it on the Parks California website, www.parkscalifornia.org.