Return of the Salmon 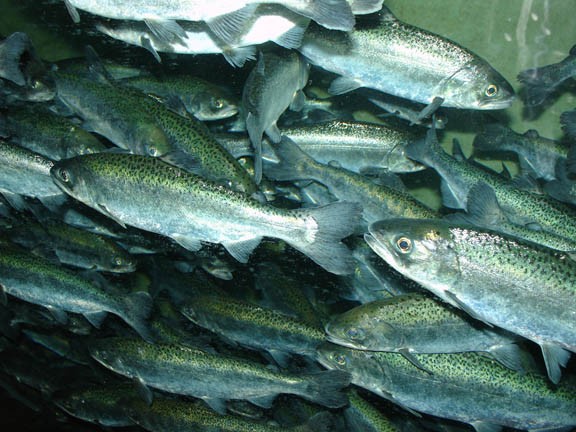 Fisheries biologists counted what may be a record run of Chinook salmon in the Eel River last year, but they aren't ready to cheer or loosen up management policies because toxic algae and other ills continue to threaten this vital ecosystem.

"This is the biggest run of salmon in the Eel since the 1985 to '87 seasons and possibly from 1955 to '58. But happy days are not yet here again," said consulting fisheries biologist Patrick Higgins who performed the estimate for Friends of the Eel River. The full report will be released soon at www.eelriver.org.

But algal blooms, silt and other man-made pressures -- including poaching by the homeless encamped along rivers -- make Higgins and other river stewards worry that the big runs will increase pressure to lift fishing restrictions when they think the salmon return could be a false signal.

"The river is still in trouble," said Higgins, who spoke about the findings in the course of an unrelated public meeting in Scotia last week.

As Higgins explained it, the Eel goes through what might be thought of as long seasons during which river and ocean conditions affect salmon runs -- somewhat independently of what humans do.

Thus the principal reason for last year's remarkable count, in his analysis, is that the region is right now going through a favorable Pacific decadal oscillation cycle (PDO) -- the name given to the climatic conditions affecting the salmon spawning.

Higgins said the favorable PDO has to do with the fact that the land has been wet and heavy water flows have flushed much of the silt out of the riverbed and cleaned out the gravel beds on which salmon spawn.

At the same time that the Eel is running high and clean, the prevalence of cold offshore waters has created the saltwater conditions that give salmon the best chances of reproductive success when they point their snouts east.

Regulations limiting fish catches are certainly part of the reason for the salmon rebound, but Higgins said these larger climatic causes -- wet land and cold oceans -- will flip back to unfavorable, meaning a dryer, lower river and warmer seas, and then the weakened condition of the river will conspire to lower fish counts again.

"The salmon rebound of 2009 and 2010 is more a product of the forces of nature rather than a result of restoration efforts," according to the executive summary of the forthcoming report. "The Eel River has become unsafe for recreational contact in summer and, if its current downward trajectory continues, the possibility of a water quality crisis and fish kill loom."

Among the threats getting increasing attention are a trio of toxic algae known by the Latin names Microcystis aeruginosa, Anabena and Planktothrix. "This is now an emerging problem in the region," Higgins wrote in an email. "In addition to the South Fork of the Eel, the Van Duzen and the Klamath, toxic algae are now widespread."

Higgins said there have been more than 10 reports of dogs sickened or killed, with the suspicion that their maladies were caused by drinking South Fork Eel water.
In addition to these issues, Higgins said that during his survey work he came across evidence that the salmon heading upriver were being hunted with homemade spears.

One of these sites was near a homeless encampment leading him to theorize that the fat fish made a tempting target to those who were down on their luck. Right now, with the salmon abundant, squelching such suspected poaching may not be a priority. But when the climatic conditions flip back to the unfavorable, if salmon have to run a gauntlet of unpermitted and hungry campers, that would add just one more stress to a salmon population in peril.