Reverse engineering — From Ol’ Blighty, an ice cream flavor to obsess over 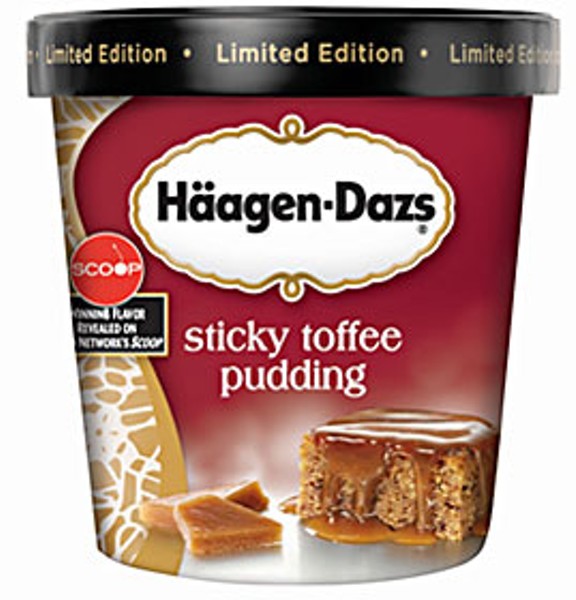 We are down to our last pint of Häagen-Dazs “Sticky Toffee Pudding” ice cream. I knew this would happen eventually, but I guess I was hoping for a reprieve. How, I thought, how could they possibly discontinue such a terrific product? Well, yes, it was one of their “contest” flavors, the ones they run for just a year.

And then they did it. They stopped making their best ice cream flavor, ever. Well, what do you expect? After all, what do they care? They don’t give a hoot about flavors, just profit; they’re a corporation, for crissakes.

The story begins with our trip to Yorkshire, England in 2006. We had no budget for Michelin restaurants, and we made our way eating pub food. If you do the research, you can eat very well in pubs. And without going into detail, we almost always had good meals, sometimes at places we hadn’t even investigated. We consumed things we’d only read about, like Pimm’s Cup, gammon, bubble-and-squeak, Timothy Taylor Landlord Ale and Swaledale cheese. All delicious. And some that were even exotic! I will be sentenced to months of alfalfa smoothies and wheatgrass enemas when the Food Police hear about this, but how could I resist “Free Range Pork Belly, Sage and Onion Risotto, Black Pudding, Old Spot Bacon, Scrumpy Reduction”? (That’s all one entrée. “Scrumpy” is a strong cider from Lancashire.)

One of the guilty pleasures of British cuisine is an odd dessert called “pudding.” It really has no parallel in the US. It’s a flour/egg/sugar concoction that can be delicious or disastrous. Seldom the same twice: a kind of puffy sweet soufflé, or maybe a dense sugary tart. Pudding is so ubiquitous in the UK that it is used conversationally as a synonym for “dessert,” as in, “What’s for pudding?”

Then there’s something called “sticky toffee.” Toffee is familiar to Americans chiefly as a form of almond brittle: milk and sugar cooked with butter, crushed almonds added, like the inside of a Heath Bar. Sticky toffee is made with caramelized dates, and it’s rich, sweet and addictive. We had it as an ice cream flavor one day at an ancient abbey, sold in tiny cups from a freezer.

But as a pudding, sticky toffee comes at you from a totally unexpected direction. Dense, chewy, creamy and intensely sweet. And you just know it isn’t something you should be eating, unless you are already overweight and on vacation. Fortunately, I was both.

But then we left the rolling dales and fells of Yorkshire, and the heaths and stone fences, and the charming villages with old graveyards, dark pubs and bitter ales. And on our return, we discovered that there was a new Häagen-Dazs flavor in the dairy case: Sticky Toffee Pudding, now mixed with vanilla ice cream, which gave it a breath of relief from the unremitting sugar. It was even better than in England!

That was last July. By September, we noticed the Co-op had stopped stocking it, and we asked. “Oh, that’s just their ‘flavor of the year,’” we were told. It seemed the company has a yearly recipe contest, and the winner’s ice cream is selected to be featured for the following year, after which it’s retired, usually by Thanksgiving. Oh, no!

It was still available, but no longer easy to find. We ordered a case of pints, and squirreled them in crannies of our freezer. By January there was no more to be found in any store.

Now we’re down to one. We’ve tried their English Toffee, which we used to like all right, but it’s a pale shadow. So after the end of our stash is gone, I figure I’m going to have to reverse engineer it.

First, the pudding. Here’s one recipe:

Most of this is available at the Co-op. Caster sugar is unrefined cane sugar, roughly equivalent to Turbinado brand. I can’t use regular butter, which has too much water and too little fat; so, a quarter pound of Strauss Family Farms butter. I’d guess the whisky should be malt Scotch, but that comes with a cork, not a cap, so my estimate is a couple tablespoons (other recipes call for Meyer’s Rum). Treacle is molasses, and golden syrup is a honey-like product, made in the process of refining sugar cane juice into sugar. It’s available as an import, but not at a price I’m eager to pay, so I’ll substitute honey diluted with a little Karo. Double cream is analogous to Organic Valley heavy cream. In short, this is not looking like a low calorie dessert.

Then the ice cream itself. Well, in for a dime, in for a dollar. I go back to the notes I made from online sources last winter, and there is the original recipe, by PastryScoop.com’s editor-in-chief, Judiaann Woo.

Oy. I’ll have to convert the ingredients from metric. But at least I’ll have already made the pudding. It sounds intricate, but hardly daunting.

No! Wait! What about my column?

I go to Häagen-Dazs.com, and it’s true!

“...because you loved the winner of our “2006 Scoop!” flavor search so much, we decided to make it a full-time flavor. Enjoy this tribute to the popular English dessert: rich vanilla ice cream swirled with sticky toffee sauce and morsels of moist brown sugar cake.”

Those who would rather forego the labor of making their own are advised that Murphy’s Market in Sunnybrae and Safeway carry it regularly.

Joseph Byrd hopes to make Yorkshire pork pies this summer. You can write him at eat.your.spinach@gmail.com.