Mozart is obscene but still heard at Ferndale Rep 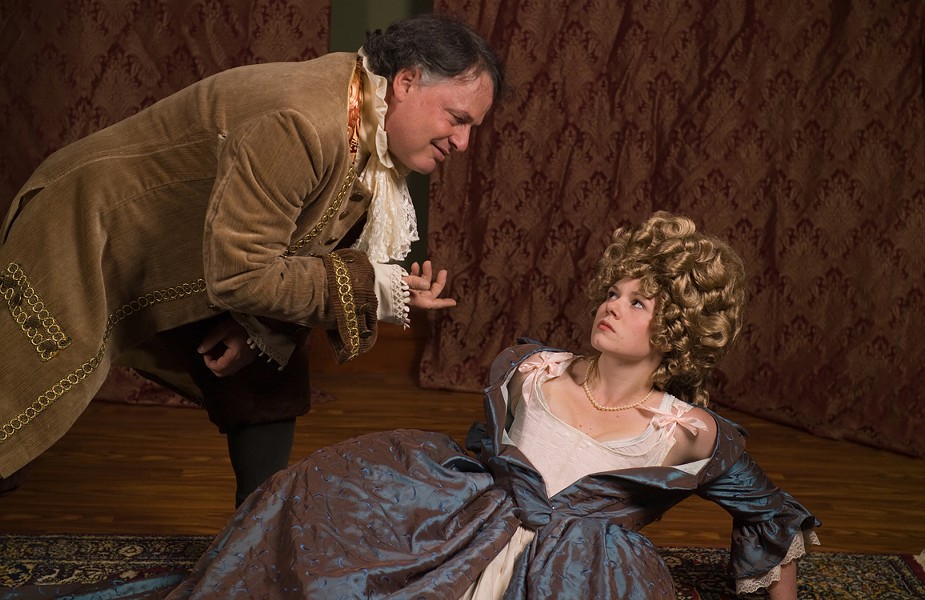 In the 1980s Amadeus -- both play and movie -- caused a sensation. When British playwright Peter Shaffer portrayed Wolfgang Amadeus Mozart in his 20s as an "obscene child," and the forgotten composer Antonio Salieri as his murderer -- either literally (in the movie) or figuratively (in the play) -- many splashy media debates ensued. (The cause of Mozart's death at age 35 is uncertain. Shaffer's play takes many liberties with known facts.)

But mostly Amadeus put a human face on this classical composer and both provided and inspired new exposure to his music. I don't think it goes too far to say that Mozart's standing with the general public today would not be as high without Amadeus in the '80s.

I saw the play in 1982 at Her Majesty's Theatre in London, with original cast members Simon Callow and Felicity Kendal joined by Frank Finlay as Salieri. Such early productions and certainly the movie were memorable for their spectacle. The Ferndale Repertory production, entering its final weekend, does not have that luxury -- even with Daniel Nyiri's handsome set and Lori Knowles' sumptuous costumes. But guided by visiting director Karma Ibsen, it has the virtue of being clear. Craig Benson as Salieri and Kyle Ryan as Mozart speak and act so that every word can be understood. The rest of the cast does likewise (with the unfortunate exception of Kyra Gardner's final speech as Constanze, Mozart's wife. But Gardner is otherwise a convincing and audible Constanze.)

The play itself is very straightforward in form. It begins with a lot of exposition, and alternates explanation and illustration with little suspense while it hammers at its themes: the infantile genius Mozart who turns the mundane into legend, and the conniving and conventional Salieri who turns legends into the mundane, paralleled by their imagined relationships with God.

There are subtle layers, and the play does attempt the difficult combination of comedy and melodrama. But it is remarkably static, with little visible character development, at least when I saw it. (That was on Sunday -- and with a 90-minute round trip and a nearly three-hour play, it pretty much was Sunday.) The production includes some recorded Mozart but especially in comparison to the movie, too few notes. There are also important plot elements that screenwriter Peter Shaffer turned into major movers of the movie's considerable drama that playwright Peter Shaffer left ambiguous or oddly vague.

The play remains informative, with three wonderful speeches about Mozart's music that still sing. This production provides an enjoyable community theater experience, with impressive presentations by Craig Benson, Kyle Ryan and the entire cast. But its particular impression on me was in confirming what I suspected in 1982, more obvious now that it is stripped of its initial shock value. At play's end, Salieri describes himself as the patron saint of mediocrity. He therefore may also be the patron saint of this play.

With some 1,100 registrants, the Region 7 Kennedy Center American College Theater Festival held last week at Humboldt State was, according to festival chair Leigh Selting, the largest ever held in this nine-state region. At the awards on the closing night, HSU theatre student Kitty Grenot won top honors in hair and makeup design, and will represent Region 7 at the national festival. HSU actor Jonny Barrett (last seen in An Evening with Rumi) was awarded a California State University Summer Arts scholarship to attend Steppenwolf Classes West. Recent HSU theatre graduate Kato Buss won the festival award for best scholarly paper by a graduate student.

An element common to the experience of everything that appeared on the Van Duzer stage during the festival -- the four productions from different schools, a special Dell'Arte collage, and the surprisingly fascinating acting audition finalists -- was this 800-or-so seat theater completely filled with the most attentive and responsive audience any performance can have: other theater people. It added a wonderful vitality, but all these registrants didn't leave much room for local folks, though some community members did see a play or two. Still, four productions on that scale and at that high level don't often visit here otherwise -- especially when one is an ambitious blend of Greek myth and American urban crisis told in classic verse and hip hop by a young African American playwright from Chicago, seen here before opening in San Francisco. Fortunately you won't miss out completely because there will be a report on these plays from inside the festival in the next Stage Matters.

Coming up: The Dell'Arte Cabaret is Friday through Sunday (Feb. 25-27) at 8 p.m. in the Carlo Theatre. This evening of favorite scenes and new stuff includes a sneak preview of Mary Jane: A Musical, being developed for this summer's Mad River Festival. The cabaret is especially notable for featuring a veteran Dell'Arte lineup not often seen together these days, including Joan Schirle, Michael Fields, Tim Gray, Barbara Geary, Joe Krienke, Lauren Wilson and Ronlin and Donlin Foreman. There may be few opportunities like this again.