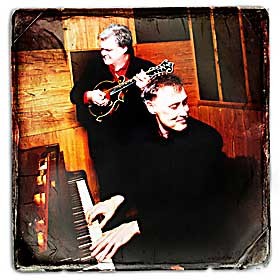 The last time I saw Ricky Skaggs was inside one of those megachurches in Southern Nevada. And he was a very different Skaggs from the man on stage Sunday night in the Van Duzer, where he and his band, Kentucky Thunder, played with Bruce Hornsby.

Back at the church, Skaggs was a little more cut-loose and personal. Picture it: Thousands of worshipers of either God or the banjo or both, sitting in the convention-style seating ready for the man on stage to rock them into a state of frenzied joy. If this was church, I remember thinking, I’m all in — except for the in-between-the-picking preaching sessions which, frankly, left me cold and a little bit itchy. Skaggs was in his element. He talked gently about his recently passed mother, poked fun at liberals, rapped about the good lord with the pastor and then transfered all that deep-set conviction and hearty love into wondrous, emotional renditions of solid-Skaggs warp-speed bluegrass and sad-porch-sessions fare. He was sometimes down-home rowdy, sometimes reflective and humble, and yet other times polished to a high, righteous gleam. The best, musically speaking.

Sunday night at the Van Duzer, the personal Skaggs took a back seat to the teamplayer and industry professional Skaggs. This wasn’t necessarily a bad thing. Skaggs and Hornsby — a musical pairing that has some fans bitching, others marveling — presented a mature, oft-lilting, oft-jazzy blend of mountain funk meets sappy dark-pop melody. And in between songs, Skaggs shared snippets of bluegrass history.

Skaggs opened the night with the entirely bluegrassy “How Mountain Girls Can Love,” and then they embarked on a dancehall-evoking tune that marked how the evening would progress: Hornsby verbally, before songs, appearing to defer to Skaggs, but Skaggs and the Thunder in fact following Hornsby’s lead at the piano. The effect was a muted Skaggs — and, unlike many people in the audience, I suspect, I was there for Skaggs, not Hornsby. About midway through the show, Skaggs observed sarcastically, making air quotes with his fingers, that this whole gig was supposedly “where I sing some of ‘Bruce’s songs’, and he sings some of ‘mine’ and — cheese-a-delic.” But, he seemed to imply, it was much more than that.

And it was. Hornsby’s smooth style — though more raw, reaching for his Virginia roots, here — was an antidote to the usual frenetic, proselytizing energy and twangy lonesome of the Kentucky-born Skaggs. One moment they were ripping through a Bill Monroe classic like “Toy Heart” and the next they were soothing you with Hornsby’s “That’s Just the Way It Is,” just a little bit stanked up. First you were racing, exhilarated, to the top of a wild mountain for a good shout across the canyons, then you were dropping back down to the rolling foothills for a reflective ramble through a sepia-toned landscape. Too much bluegrass for too long of a duration can fray the nerves. Too much of the other stuff and you fall asleep — and then, praise be, for the bright, happy slap awake from Jim Mill’s banjo.

Toward the end, however, Skaggs, Hornsby and the Thunder broke all molds by playing Rick James’ “Super Freak” — but let me tell you, the words “She’s a very kinky girl, the kind you won’t take home to mother” didn’t have half the effect at the Van Duzer as they did at Skaggs’ raffish get-down sesh at Central Christian in Las Vegas.