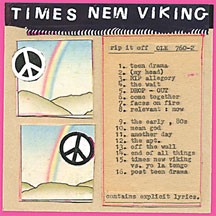 The lo-fi rebellion has come and gone, but its echoes ring in underground rock to this day, liberating bands from the creativity-limiting atmosphere of studio recording and allowing them to hone their expression at home. Years of being a necessity for underground rock bands have made low fidelity a calculable art unto itself, with pop albums banged out during a drunken weekend on a four-track often appearing to have a raw urgency that studio albums lack. For Columbus, Ohio's Times New Viking, the lo-fi presentation of a cracked pop sensibility seems to be the crux of the band's sound, though there is more to them that lies beneath the surface of their fidelity. Rip It Off is TNV's debut for Matador, a first departure from the legendary Siltbreeze label (which for the last 18 years has chronicled the ectoplasm within the bones of underground rock). On this, their third proper LP, TNV marries a songwriting style harkening back to the ramshackle, open-armed pop of late '70s/early '80s acts like The Clean or Swell Maps, but with the levels-in-the-red analogue overdrive ("blown out" as the kids call it these days) of '80s Japanese power-psych groups like High Rise and Mainliner.

Along with groups like their hometown sister band Psychedelic Horseshit and Portland-based rabble-rousers Eat Skull (both currently, or soon to be, on the Siltbreeze roster), TNV is part of a new slew of lo-fi pop bands that revel in their disregard for clarity by pushing distorted, damaged elements to the forefront. Whereas the lo-fi of the past was a result of musicians with ideas that went beyond their recording budget or capabilities, the fidelity of these new bands' records is often jarring to the point of seeming intentional, a cultivated aesthetic instead of a byproduct of artists working beyond their means (according to the liner notes, Rip It Off was recorded on a studio eight-track on 1/2 inch reel tape, but from the sound of it, the album might as well have been done on a boom-box in the corner of their band room). Regardless of the intention, the fidelity places the end result in an especially interesting soundworld, at its most extreme consisting only of blasts of white noise with melodies delicately stitched in beneath them, traditional elements like "drums" or "guitar" blending into one big wash of distortion (although it mostly just sounds like a bad bootleg of a really good live show). But it's exactly this marriage of noise and melody (a timeless rock dichotomy since The Velvets) that makes the record such an interesting listening experience, sounding like tiny blocks of cassette noise with songs only lightly sketched in them — you almost have to squint your ears (if such a thing was possible) to make out what's going on.

Fidelity aside, what really makes the record is the fact that beneath the haze of the recording method, the songs are really fucking good. In fact, this actually might be the catchiest record you'll hear all year, with the kind of melodies that sound immediately familiar as if you've already heard them countless times before, even if this time it sounds like you've swallowed them down along with a handful of disassociatives. With oscillating male/female vocals and guitar/keyboard hook lines, it's almost as if the whole thing could be a Scottish fey pop album or something on K Records, if the whole thing didn't sound so totally fucked up. All in all, the album is much more accessible than one might imagine.

In an age where default brick wall limiting settings mold the average album's auditory shape via Pro-Tools, and songs are mastered for iPod earbuds and laptop speakers, albums like Rip it Off pose a question to the listener: What power does fidelity even wield? Though the goals of a band like Times New Viking certainly aren't particularly lofty, the clear implication is that those caught up with the value of presentation just might be barking up the wrong tree — it's the content of the album that matters and not necessarily the form. And here the former greatly eclipses the latter.