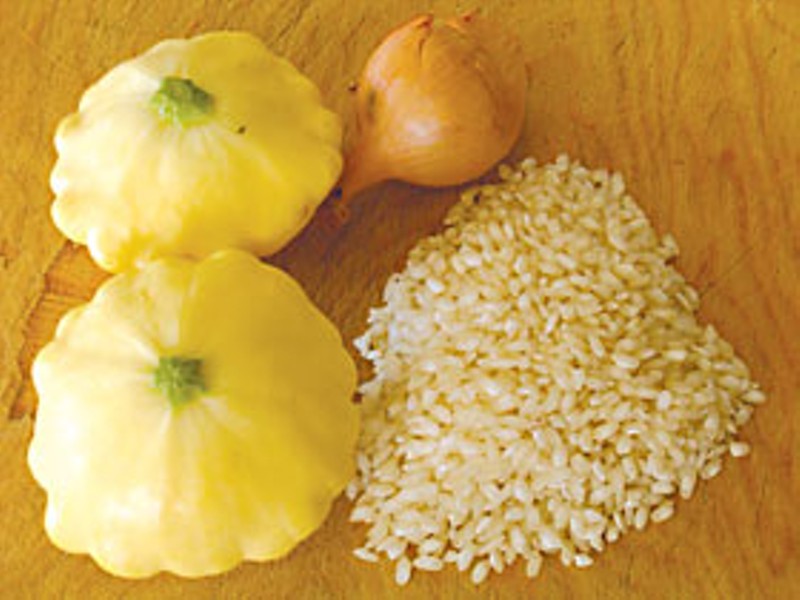 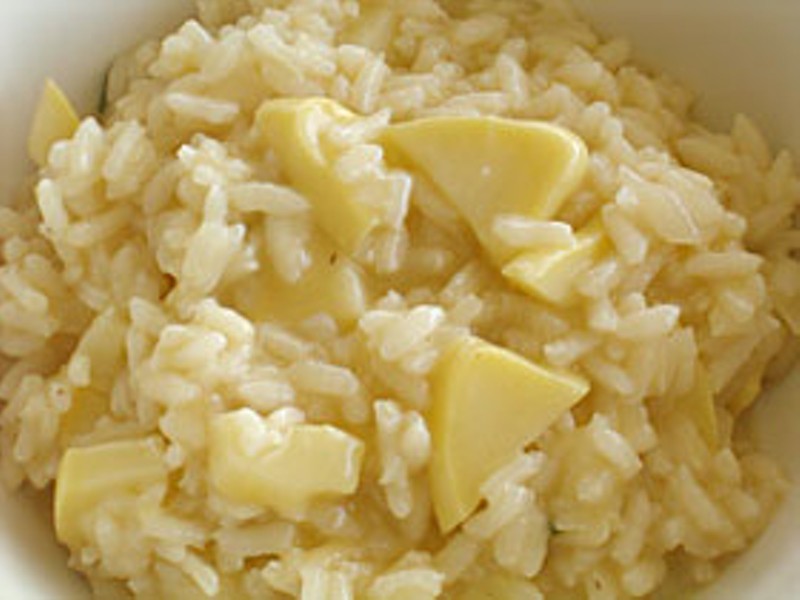 Risotto is an Italian dish that seems to have acquired, upon arrival in this country, an aura of mystique, as if its preparation entailed some kind of magical procedure. Is this true? Not that I am aware of. What risotto does require is the right kind of rice, a willingness to suspend multi-tasking for about half an hour and an attitude of "less is more." I will proceed to explain the three requirements in order, then describe the way I make risotto.

First, a short geo-historical trip to Italy: Although rice had been known for centuries, it was only in the 15th century that its cultivation for wide consumption took hold in Italy. Before then, rice had been used as a medicinal plant or as an ingredient for desserts, and, being imported from Asia, it was very expensive. The alluvial Po valley in northern Italy was an ideal setting for the cultivation of rice, hence the first Italian rice pads were located in Piedmont and Lombardy. Until the 19th century, all the rice grown in Italy was of type nostrale (local). In 1839, Father Calleri, a Jesuit, smuggled over 40 varieties of Asian rice from the Philippines, which were then used by Italian growers to expand the range of production. Italy is now the biggest rice producer in Europe: Several dozen varieties are grown over half a million acres, mostly in the area around the northern cities of Novara, Vercelli and Pavia.

Italian rice is classified according to grain size and different varieties are suitable to different uses. Arborio and carnaroli (both superfino ) are the varieties that are most commonly found in this country that are good for risotto. Vialone nano and baldo are additional options. Arborio is widely available in our local stores, both in bulk and packaged. Hence, securing the number one ingredient for risotto is not a daunting task.

Second, compared with making polenta or gnocchi, dishes I described in previous articles (see Table Talk, March 1 and April 26), preparing risotto is slightly less time-consuming, though not less attention-demanding. You cannot start risotto and then forget about it until the kitchen timer reminds you that you have something cooking on the stove. On the other hand, you don't need to obsess over it, nor worry about stirring it the right number of times in the right direction, nor wonder about what other magical gestures you must perform in order to get dinner on the table. Just be around the stove while the risotto cooks and make sure to both stir it and keep it moist by adding broth, until it is ready (more details on the cooking process in a minute).

The third requirement is dictated by personal taste. I consider risotto a delicate dish and therefore it pains me to read recipes that add a long list of ingredients, as if it were a minestrone . I use only one flavor, to which onion, Parmigiano and possibly an herb provide the background, while rice provides the backbone. Once you learn the basic procedure, you can let your creativity flow and experiment with varying combinations, depending on the fresh vegetable calling you from one of the farmers' market stalls, or from a corner of your garden, or from a [night or day]-dream you may have. Last Saturday, as I was walking around the Arcata Farmers' Market, some golden yellow pattypan squash spoke my name loud and clear and I heeded the call. I brought home half a pound and by dinnertime I had a dainty risotto.

Before dealing with the chosen ingredient, I start heating the broth. I have no qualms about using organic vegetable stock bought in cartons, though making my own would certainly be better. Using a bouillon is a possible, less gustatory-appealing, alternative. In a 1-quart saucepan I pour two cups of broth and one cup of water and bring to a simmer. In the meantime, I mince half an onion or a whole shallot so that I have a quarter cup of minced flavoring medium. In a 2-quart saucepan I warm up half a tablespoon of olive oil and add the minced onion or shallot, which I cook on low heat until softened, but not browned, about 6 minutes.

I add the squash sliced into bite-sized pieces, about 1 inch wide and 1/4 inch thick. Saucer-shaped pattypan squash defies any attempt -- at least any attempt of mine -- to be cut into pieces of regular shape, so those measures are approximate. I cook the squash for 10-12 minutes on low heat, until it starts to soften, stirring often to prevent sticking. (Note: Different vegetables require slightly different cooking procedures before the rice is added.)

It is now time for the rice to make its entrance on stage: One cup of the risotto rice of choice joins the squash slices in the saucepan. I turn up the heat slightly and let the rice toast for one minute, stirring continuously, then turn the heat down to a level that will keep the risotto cooking gently until completion of the process. If necessary, I turn up the heat under the broth so that it will be simmering soon. To the rice and squash I add a quarter cup of white wine and stir until the rice has absorbed most of it. At this point, I set the timer to 15 minutes and start adding the simmering broth to the rice, a ladleful at a time, stirring well after each addition and waiting until the rice has absorbed it before proceeding with the next one. I do not stir constantly, but I make sure that I do not get distracted, or the rice will stick to the pan or dry up. Either occurrence will ruin the risotto. Even though bubbles of broth are visible on the surface, the risotto may be dry underneath. The only way to tell is to plunge the wooden spoon into it and stir.

The timer beeps shortly after adding the last ladleful of broth. I taste the risotto: it should be al dente, soft but not mushy, creamy but with some body. If it feels still a bit hard at the core, I cook it a minute longer. You can add some salt now, according to your taste. When I am satisfied with the texture of the risotto, I turn off the heat and add a quarter cup of freshly-grated Parmigiano, then stir well so the cheese melts in the hot risotto. I recently planted marjoram in my garden and like the flavor bestowed to the risotto by a tablespoon of its leaves sprinkled at the end.

The traditional finale calls for two tablespoons of cold butter to be added together with the Parmigiano, plus one minute of vigorous stirring. This is called mantecatura and serves the purpose of whipping the butter and of giving a creamy consistency to the risotto. Whatever the finishing step, I let the risotto rest for a few minutes before serving it. During this time, the rice absorbs some more broth and then it is ready to be savored.

As you can see, I use no magic wand besides my wooden spoon, and pronounce no magic formula. I simply follow a procedure that, once mastered, opens up a world of possibilities. Then, the next time you visit a farmers' market or grocery store, you will find yourself looking at vegetables (asparagus, tomatoes, zucchini, etc.) from a risotto perspective.

Simona Carini is a native of Italy who splits her time between Trinidad and Berkeley. She writes about Italian foods also at her blog: briciole.typepad.com