A semi-famous bus of do-gooding vagabonds stalls in Humboldt 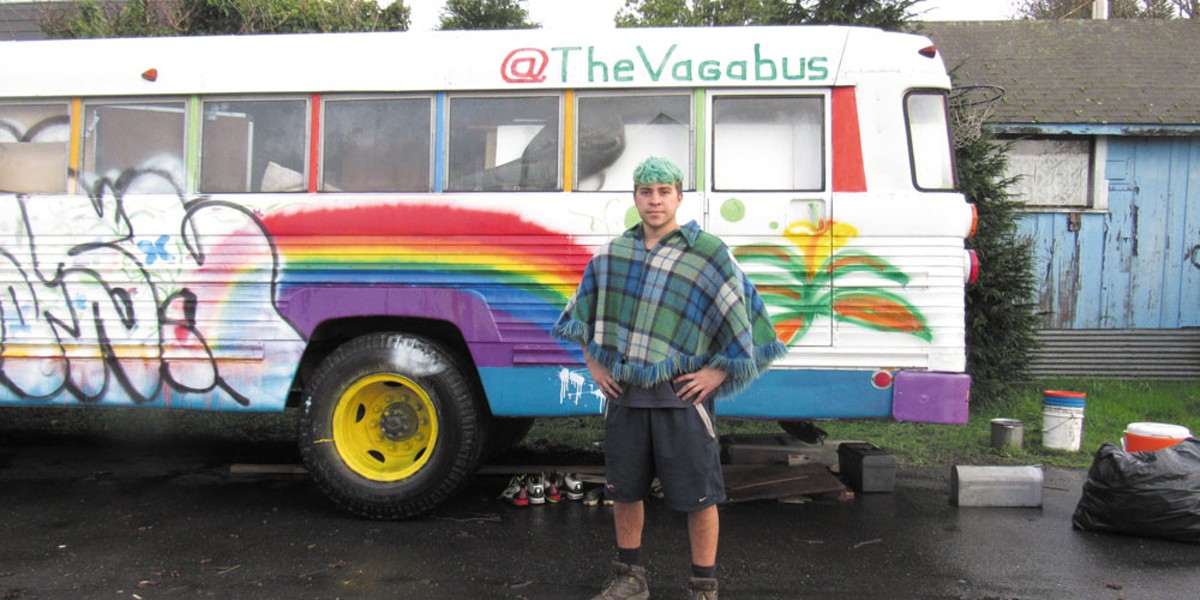 Photo by Linda Stansberry Will Yuhlein and Steven Boutwell stand by the recently "puked" Vagabus.

The rain has stopped, the homeowner has said they can stay the night, and the inhabitants of the Vagabus are doing what they call "puking the bus," which means removing all of the contents of the 41-foot 1971 Bluebird schoolbus so they can clean and organize within. Previous efforts at a deep cleaning have been stymied by bad weather, law enforcement and annoyed business owners, but this is among the smaller obstacles facing this group of self-proclaimed "rubber tramps." Despite having only traveled a fraction of their ambitious, multi-continent itinerary, raising only 4 percent of their $25,000 crowd-funding goal, and allegedly scaring off at least one reporter who couldn't handle their free-spirited ways, the Vagabus detail has swelled from a lone bus to a caravan thanks to Humboldt County residents. The bussers' optimism seems undimmed.

It began, as many dubious contemporary escapades do, on a subReddit. The bulletin-board type website has a vibrant community of so-called "vagabonds," who use the Internet to connect and share information about travel plans, seasonal work and traveler-friendly communities. Something about the call to create a "large hobo army to embark on an epic trip across the entire Western Hemisphere" caught on. Perhaps it was the energy of the Reddit user who began the movement, Mississippi native Steven Boutwell. At 32, Boutwell, whose road name is "Huck," has been hitchhiking and hopping freight trains for almost his entire adult life. He could have settled down, he says, he just didn't want to.

"I started out as homeless involuntarily, but then I got into the lifestyle," Boutwell says. "I figured out how to take care of myself — by dumpster diving, or going to a bread store and asking for their almost-stale bread. Then I found out if I went to the foodbank and offered to volunteer, they'd give me twice as much food."

Inspired by this discovery, Boutwell put the call out to his fellow vagabonds, hoping to gather a community of like-minded travelers who wanted to volunteer their way from Fairbanks, Alaska to Tierra Del Fuego, Argentina. Since it would be virtually impossible for a large group of people to hitchhike together, they would buy and renovate a bus for habitability. The idea went viral, due in large part to Huffington Post technology reporter Betsy Isaacson, who met Boutwell while reporting on how homeless travelers use social media. According to Boutwell, Isaacson agreed to buy the bus in return for the gonzo journalism experience of riding along. She left the Vagabus in late December. (Attempts to contact Isaacson for this story were unsuccessful.) A different writer, with GQ, bailed out after only 11 hours on the road.

By Nov. 1, a bus had been located and purchased in the Bay Area. By Nov. 7, the Vagabus was rolling through the redwoods. The original plan was to travel to Canada to pick up some solar panels, then turn around and begin the trip south, spending three to four days in each town and wintering on organic farms in central Mexico. Instead, thanks to the lure of free pizza, the crew spent two months on the foggy Oregon coast.

"Someone gave us a gift card for Domino's. We looked it up and the closest city north of here with a Domino's was Coos Bay, Oregon," Boutwell says. "When we got there, our clutch went out."

Because of the age of the bus, it took several months and more than $1,000 in parts to repair. (The bus currently has 268,000 miles on it.) A pilot car went to Canada and picked up the solar panels. Meanwhile, the Vagabussers coordinated a beach cleanup and Boutwell continued to pound the digital pavement asking for donations, both from potential riders and do-gooders. On the group's Reddit page, Boutwell requests a buy-in of $1,000 per vagabond to cover gas and personal expenses. Boutwell and Isaacson also collaborated on several crowdfunding sites.

"A lot of us are currently homeless!" reads the group's Indiegogo pitch. "So if you hate homeless people and don't want us in your city, you should fund us, because then we'll be in a different country."

By mid-January the bus was rolling again, coming to a stop in Arcata on Jan. 22 for more volunteer work and repairs to a broken driveshaft. In the meantime, Boutwell has been a PR force of nature, calling local media outlets and coordinating with Eureka nonprofit The Ink People to get the Vagabus listed as a Dreammaker project, which grants it non-profit status. The organizations with which the vagabussers have volunteered — the Salvation Army, Friends of the Marsh, Food for People — say their work has been diligent and very welcome.

"It was a wonderful, mutual thing," Kim Class, executive director of the Companion Animal Foundation, says of the group's work cleaning up her nonprofit's backyard and kennels.

Class returned the crew's work by feeding them, letting them shower at her home and spaying one of the group's "road dogs." It's this kind of reciprocity on which Boutwell says they are dependent to keep going.

"Last week someone saw what we were doing and handed us a $100 bill," he says. "Of course, it doesn't go far, because our bus only gets 5 miles to a gallon."

While the movement may not be growing fiscally, its size has doubled. Since arriving in Humboldt, four people in a bus have grown to a caravan with 11 people, five dogs, two buses, a minivan and an SUV. One bus was donated by a local business owner on the condition that the group stop camping in front of his office.

"It sounds like a kinder, gentler version of Mad Max," Tim Crosby says of the caravan. Crosby is operations manager at Food for People, where the group volunteered a month ago. "They're really nice guys. I'm surprised that they're still in Humboldt; they must have a lot to do. I hope they make it to Tierra Del Fuego."

"We're growing faster than we need to," admits Boutwell, who says anyone is welcome to join, "All I ask is that you're not a thief, you don't use hard drugs and you're willing to get your hands dirty."

Among the more recent additions to the bus are a college junior who dropped out of Mississippi State University when he read about the bus on Reddit, a young couple that was living behind the Bayshore Mall, and a rogue zine publisher who only gave his road name, "Tumble."

"I've lived on the streets since I was 8 years old," says Tumble, who began his life as a ward of the state. "This is different for me, being inside a bus. I'm taking it slow."

William Yuhlein, the young Mississippi State dropout, said that like other members who bring their unique talents such as carpentry and cooking to the bus, Tumble's talent for playing the djembe has enhanced the group. They spent a recent rainy morning aboard the bus playing music.

While they definitely plan to leave soon ("We've been saying three to four days for weeks, now," says Boutwell), the group is currently searching for someone who can repair the brake lights and turn signals on the schoolbus. Their malfunction almost caused an accident recently, and they'd like them fixed before they leave town.

"We're just headed south to the next dot on the map, and that's Fortuna," he says, adding that plans to go to Argentina may be slightly delayed due to a ferry strike in Panama's Darien Gap.

"We definitely need help with necessities, like fuel and tortillas. We go through about 80 tortillas in four days," he says. "But I have no doubt that we'll make it."