Late-summer action flicks pursue the thrill of the chase 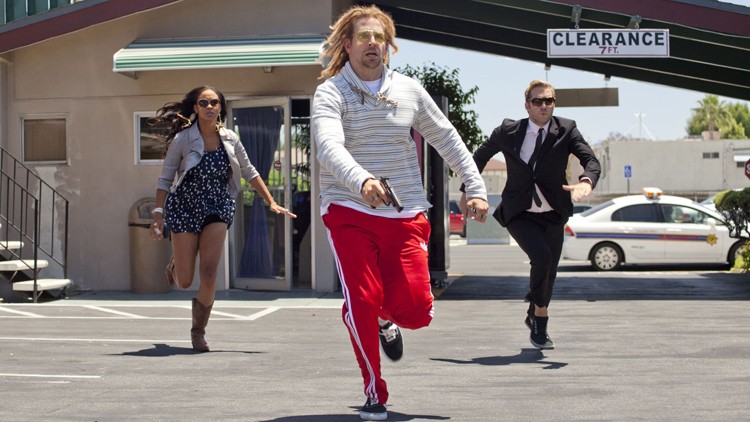 HIT AND RUN. If I had to pick a favorite sub-genre, it would probably be car chase movies. I'll acknowledge that most of them are guilty pleasures, but I can live with that. You like what you like, and I really like Hit and Run. It has plenty of what I like to see in a summer movie: comedy, action, lightheartedness and the overarching sense that it was a lot of fun to make. Of course it's also implausible, silly and formulaic, but like I said, I'm OK with that.

Dax Shepard plays a getaway driver who testified against his murderous former associates. During his stint in witness protection, he falls for Annie Bean (Kristen Bell). When she's offered a university teaching job in L.A, he decides their relationship is more important than his continued anonymity/safety. They set out for the southland, pursued by his bloodthirsty ex-robbery crew and a U.S Marshal minder (Tom Arnold). Annie's ridiculous ex-boyfriend (Michael Rosenbaum) is also in bumbling hot pursuit. The story is a thin excuse to get everybody into cars for prolonged chase sequences and some relationship-examination type conversations, but somehow it all works.

Shepard is credited as writer, co-editor and co-director; he also appears to have done a fair amount of his own driving in the movie. This passion-project aspect of the thing may have been what really won me over. Most summer releases would take this basic blueprint and churn it through the studio machinery until it was lifeless, laugh-less and homogenized. Somehow, Hit and Run avoids that trap. It's a little raggedy and rough in places, but it's got a good heart and it's a lot of fun.

Shepard and Bell bait and snipe at each other like a real couple (which they are), and their conversations are mundane and silly enough to ring true. Bradley Cooper makes a welcome return to comedy playing the fearsome, ridiculously dreadlocked antagonist.

Above all else, Hit and Run is a refreshing change of pace. It proves -- as if it needed proving -- that inconsequential comedies can still be director-driven, individual works of art. Sure, it's broad and goofy, but there's nothing wrong with that. I'm excited to like this movie as much as I do, and I celebrate the fact that it got made at all. R. 100m.

PREMIUM RUSH has a lot going for it: Joseph Gordon Levitt and Michael Shannon are two of the more charismatic, likeable actors working in Hollywood; writer-director David Koepp is a seasoned pro with an impressive track record. And everybody loves a bike messenger/immigrants in trouble mash-up, right?

OK, strike that last one. While Koepp's fascination with the sweaty, low-rent world of New York City's courier culture serves up plenty of opportunities for exciting chase sequences, it isn't enough to carry the movie. That fact, and a distractingly cartoonish execution, mean Premium Rush never quite lives up to its potential.

Levitt plays Wilee, arguably the best and most brazen rider in the Big Apple. His relationship is on the skids, and he pretty much lives to ride. He picks up an envelope that needs to go to Chinatown. The contents of the envelope are extremely valuable, a fact not lost on inveterate gambler/maniac cop Bobby Monday (Shannon). In a series of shifting timelines and occasionally exhilarating chases, Wilee and Monday play an ever-escalating game of cat and mouse through the city.

The two stars turn in admirably committed performances, particularly Shannon's twisted take on Bobby Monday. He manages a delirious balance of menace and humor that never lets up. Somehow, it's both hilarious and convincingly scary. Levitt attacks his role with the usual aplomb, even apparently taking on some of the bike stunts himself. The rest of the cast is merely background for these two.

The same could be said of the movie as a whole. While polished and self-assured, it lacks the energy and gravitas of the performances that anchor it. Even the stunt sequences, while impressive, fail to be as fun and risky as they could have been. PG13. 91m.

2016: OBAMA'S AMERICA. Described by one critic as a "right-wing horror flick," this agit-prop documentary paints Obama as a radical who's waiting for his second term before acting on the anti-colonialist ideals he inherited from his father. PG. 89m.

THE POSSESSION. Finally, a horror movie about a haunted Jewish wine cabinet. A young girl buys an antique box at a yard sale, unaware that it contains a dybbuk, a malevolent spirit from Hebrew mythology. Predictably, the dybbuk hops into the girl's body. Scary stuff ensues. PG13. 92m.

THE OOGIELOVES IN THE BIG BALLOON ADVENTURE. Described as the Teletubbies meets The Rocky Horror Picture Show meets a Tyler Perry movie, this kid flick encourages children to sing and dance in the theater. Let's hope the walls are thick. G. 88m.

THE INTOUCHABLES. After a paragliding accident leaves him a quadriplegic, a French aristocrat hires a black man (!) from the projects (!!!) to be his caretaker. In French with English subtitles. R. 112m.

HARRY POTTER AND THE CHAMBER OF SECRETS (2002), the second in the boy-wizard series, will show at the Arcata Theatre Lounge Sunday at 6 p.m. PG. 161m.

THE DARK KNIGHT RISES. If you need a synopsis to tell you that this is the third Christopher Nolan Batman movie, we're guessing you don't plan to see it. PG13. 164m.

THE EXPENDABLES 2.  Stallone, Schwarzenegger, Norris and more geriatric action stars pay homage to their '80s action roots, with all the fun and stupidity intact. R. 102m.

THE ODD LIFE OF TIMOTHY GREEN. A childless couple writes down their hopes for a young'un, buries them in the backyard, and hark, a dirty kid emerges. PG. 100m.

RUBY SPARKS. A wunderkind author overcomes writer's block by conjuring his dream woman -- first on the page, then in the flesh. R. 104m.