Roasting chicken and a Taste 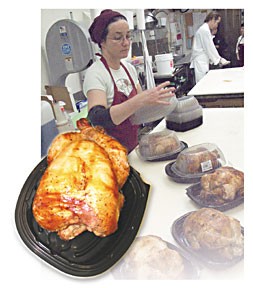 While shopping at Wildberries not long ago, I saw Phil Ricord staring, lost in thought, in the general direction of the deli section, aka Wildplatters Café. If you shop at the store, or listen to the radio or watch TV, I don't have to explain who Phil is - in short, he owns Wildberries. In the interest of full disclosure I should also mention that I've known Phil for years, I guess since he married his wife Jeannie, who I've known for several decades. I also worked for Phil briefly: I was hired as assistant manager of Wildplatters at its inception, an exciting job that I did not keep too long for reasons I won't go into here.

I interrupted Phil's reverie to ask what he was looking at. "My new toy," he replied. I had actually checked out the recent addition to the café when I'd arrived at the store: a lovely chicken rotisserie that had been fired up for the first time that very day. I'd come looking for something for dinner and would have bought one of the roast chickens, if they were ready.

As I told Phil, rotisserie roasted chicken has become a regular thing for our family, at least on days when I make the drive to Costco. They're phenomenally cheap, ready to eat immediately, and in our household, with just two of us (sometimes three), one chicken will make for a series of meals.

I'll slice off part of a breast for me, a leg or thigh for Amy, maybe zap a potato in the micro and whip up a little salad for a first dinner, then pick the rest of the meat and use it for a variety of dishes. It might be shredded and sprinkled with cumin for a taco at lunch, or it could become one component in a homemade version of Chinese chicken salad. I might roughly cube some to use as part of a pasta dish (along with whatever else happens to be in the fridge). Or, as in a recent dinner, add it to half a jar of Thai green curry sauce (purchased on my last Trader Joe's run) along with a few quickly sautéed mushrooms and a handful of leftover green beans to make a spicy dish served over a portion of rice that lingered from some Chinese takeout meal.

Phil was still figuring out what kind of chicken he'd use and how much he might charge. I don't think he'd ever bought a Costco chicken - he seemed genuinely surprised when I told him they only cost around $5. I can't say it was that conversation, but he's decided to offer two tiers of roast chicken, conventional and free range, with the more natural chicks priced a bit higher.

On a recent Monday around noon, Terrdog Devine was just about done roasting the day's batch of upper tier "Rocky" brand chickens, free range, hormone- and antibiotic-free birds, "sustainably farmed" in Petaluma according to the company website, but not certified organic.

As Devine pierced a bird's thigh with a thermometer looking for 175 degrees, and the juices flowed, you could see that the roasting kept the meat totally moist. She says she doesn't do much to the birds before cooking them, just sprinkles them with salt and pepper or Carl's All Purpose Seasoning, a spice mix originally made by a Tennessee hunter for use on venison.

By dinnertime, she will have roasted a second batch using Foster Farms chickens, presumably grown in a more restrictive and relatively less sustainable manner. I can actually guess how the poor animals lived and died, but I'd rather not think about it since that's the kind of chicken this frugal consumer generally buys.

The roasted Rocky goes for $12.99, which is not bad; the conventional chickens are a deal at $7.99 - not quite as cheap as Costco, but that's wholesale, and Wildberries is much more convenient for me.

If you've been paying attention you probably know that the Redwood Coast Jazz Festival is coming up next weekend. That means it's time for Eureka Main Street's 15th annual fundraising event A Taste of Main Street, which, as always, takes place the Thursday going into fest weekend. (This year that's March 29.)

Main St. Director Mary Smith called me the other day hoping for a repeat of the Talk... column I wrote last year around this time, essentially a venue-by-venue guide to the affair. Looking back at it (which you too can do, online at www.northcoastjournal.com) I realize that not much has changed since last year. There are a few more places with food - 25 total by my count, as opposed to 22 last time - but for the most part they're serving the same thing as before.

"What would I write about?" I asked Mary, "What's different and exciting?"

"Well, this year we have dog treats; we never had those before," she told me, eventually admitting that it wasn't much of a selling point, especially for someone like me who doesn't own a dog. In fact it is not advised that you bring your pet. The All Dogs Biscuit Bakery's Multi-Grain Cheddar Paw dog treat at 4 Paws & Wet Noses is "to take home to your pup."

At the risk of inciting an editorial from the Eureka Reporter, I'll admit that I attended Taste of Main last year, and took my mom with me, courtesy of complimentary tickets supplied by Mary. It's probably not what she had in mind when she gave them to me, but having attended for the first time in years to see what it's all about, I'm going to lay out some of the negative aspects of the event.

First, there are too many choices - too many places to go - and they're too spread out. We ended up only using half of our tickets. Granted I was walking from place to place with my mom, and she's 86, but she gets around pretty good. Yes, there's a shuttle, but we never used it. It just seemed too complicated and time consuming, unless you wanted to try to go everywhere, for example all the way from Avalon with their obligatory chocolate fountain, to the other side of downtown -- last year it was Bless My Soul Café (who are not on the tour this time).

I can't imagine walking all the way to this year's satellite venues like Go Fish, where they have fish nuggets (naturally), nor to the Eureka Co-op. This is the first Taste since they opened the new store, and if you haven't seen it, it might be worth a shuttle ride to check it out, but fair warning, for some reason they are not laying out the same sort of sumptuous array of foodstuffs they had last year in the lobby of the Vance. All they're offering is French beef stew and North Coast Bakery brownies.

I love dessert, but there are just too many places giving out ice cream, cookies and "treats." Then there are the downright stingy joints. To save them some embarrassment I'll leave their name out, but one venerable restaurant is just giving out bread - again.

The area of Old Town near the Gazebo was the place to be last year and it's not much different this time. But if things go the same, expect a mob at prime venues like Hurricane Kate's, where they once again have their "hors d'oeuvres with a twist," or next door at the new Half Empty Café, where they're serving Spanish tapas, and definitely down the street at Gallagher's, where they had a hard time keeping up with the demand for their deep fried prawns.

As I recall last year's event in detail, and think about all the people we encountered, it's becoming clear why we did not get through our ticket books. We kept running into friends, which, unless you're rude, entails catching up on what they're up to and so on. Did I mention there's music? There is. And no surprise since it's the kick-off for the Jazz Fest. It's a convivial sort of affair, and while it can be problematic when you're hungry, that's actually a good thing. Come to think of it we had a fine time, so maybe Taste of Main isn't that bad after all.

A Taste of Main Street runs from 5-8 p.m. Thursday, March 29, rain or shine. Advance tickets are required (it will sell out) and are available for $25, which as Mary likes to point out, comes to a buck per taste. Call her at Eureka Main Street, 442-9054, for further details.