Rockin' in the New Year 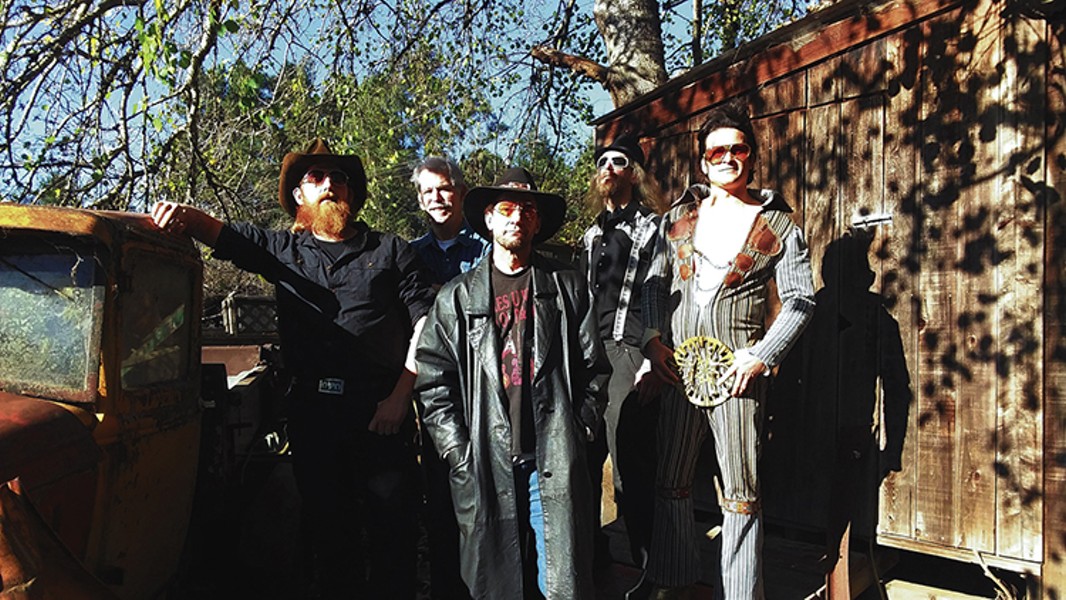 Courtsey of the artists. Psychedelvis and The Rounders play The Logger Bar Dec. 31 at 9 p.m. (free).

Have you ever skipped a rock across a frozen pond? It sounds like tension cables snapping or an industrial spring being tuned. It sounds like Star Wars blasters, particularly if the ice is thin or there are holes in it. It's a perfectly natural sound but it doesn't seem like one at all. It seems like a spectacle, a frozen bit of aural wizardry straight out of the sci-fi and fantasy section of the store. Have you ever spun in circles in a yard or a field while looking down and then laid down with your eyes closed and felt the world wobble underneath you? Again, a totally simple thing, a cheap thrill, but it feels absolutely extraterrestrial. There isn't some braying moral point here or a gotcha moment around the corner. I am not even going to point out that music is an "everyday" sort of magic because we all know it is.

Instead, I am just going to wish you all a future full of all the joy and thrills life has to offer, be it a jam-packed show with lights and everything or simply learning how to trick your brother's dog by putting a sick bit of backspin on the tennis ball while you're playing fetch. (Suck it, Arrow!)

New Year's Eve shows tend to have a fairly above nominal entrance fee which can get a little pricey so for New Year's Eve's eve, allow me to suggest three free shows that will allow you to save your ducats and doubloons (I just listened to a podcast about pirates, sorry) for the main attraction tomorrow night. The Lost Dogs brings its classic rhythm and blues sound to the Redwood Curtain Brewery at 8 p.m.

Buddy Reed and the Rip It Ups play some plain old blues blues at the Speak Easy at 9 p.m.

Also at 9, and farther south and up a hill, Claire Bent —vocals — joins her father Jim — on drums — and the veteran players in Citizen Funk for an evening of soul and funk classics at Bear River Casino. Shuffle, dance or have a gander, the entertainment's on the house. Free, free, free.

Well, it's here. The terminal point of a long and needlessly exhausting year of trials, travails and — hopefully — a few triumphs. Here's hoping that 2017 will be remembered as America's Empire Strikes Back year and that 2018 will bring a much-needed balance to the tailspin we are in now.

I have tried to find a little something for everyone tonight, so let's start off with the kid and friend family event. Redwood Raks Dance Studio has a dance party with two rooms, two DJs and a Martinelli's apple cider toast at the appointed hour. If you or your loved ones can't dance, fear not: Admission comes with a dance lesson starting promptly at 8 p.m. $12.

The Logger Bar hosts Psychdelvis and The Rounders, an Elvis Presley and David Bowie mash-up cover band which is also known to jam, jam, jam. Ground Control to Major Tom Parker. The music starts at 9 p.m. and we all probably know around when it will reach the crescendo. Free.

Meanwhile, at the same time on 10th Street, Humbrews kicks off a different sort of jam when local funksters Object Heavy team up with Absynth Quartet to drag you dancing and screaming into the new dawn.

For those who like bass-heavy electronic dance music or just prefer to go deaf first in the 20-250 hz frequencies, The Arcata Theatre Lounge has you covered tonight. At 9:30 p.m. the New Year's Eve Galaxy show starts with back to back sets by Onhell and Zanapod, Hypha and Rhizae, Avi8trix and Jason Burruss and a set by Danny Corn as well. Get deep down with future trap bass digging machines. $20.

If you want to be a star or watch other people star in their own celebration of Saturnalian excess, The Miniplex has a special night of Karaoke around 9-ish. Tonight's Dare-oke-a thing they do where the KJ picks the song for a brave member of the audience- will have the theme, "The future and new beginnings," so bear that in mind. I for one hope that a favorite karaoke tune of mine will make the list, "War Pigs" by Black Sabbath. Not because I wish for war, dear readers, but rather because I would like to see the part of the lyrics where God condemns all the politicians, generals and military industrialists to an eternity in Hell come true in 2018. Hosanna. Free with a two-drink minimum.

It's Jan. 1, 2018. The first day of a brand new year. Odds are most people are either hungover, still asleep, or getting an early start on their resolutions and going jogging for the first time in a decade or squashing an ancient family feud or finally getting around to reading an unreadably long masterpiece from the canon of western literature (don't do it, it isn't worth it. I'm looking at you, Melville). Anyway, everything's closed. Put on Thelonious Monk's solo piano album and clean up the mess you made last year. You will feel better.

The Logger Bar has its Irish Music Session tonight at 8. Listen and tap your toes, bring your bodhrán and keep time, or just remove yourself from the participatory aspect of the event and drop some change on a few drinks. Have fun your own way, or as Buck Mulligan put it, "Póg mo thóin." Price TBA.

The rotating cast of musicians called Sunny Brae Jazz will continue their first Tuesday of the month residency at Six Rivers Brewery for your prandial pleasure. 9 p.m. Free.

The Speak Easy has its Ultra Secret Wednesday Queer Night tonight at 8, same as last year. And like last year, the bar is invited to get down to the hybrid house-beat neo jazz sounds of LD51. Free.

Collin Yeo recently learned that the largest mammal on Earth, the blue whale, has arteries large enough for an adult human to swim through them. He has consequently narrowed his list of New Year's resolutions down to one item, which is underlined several times. He lives in Arcata.