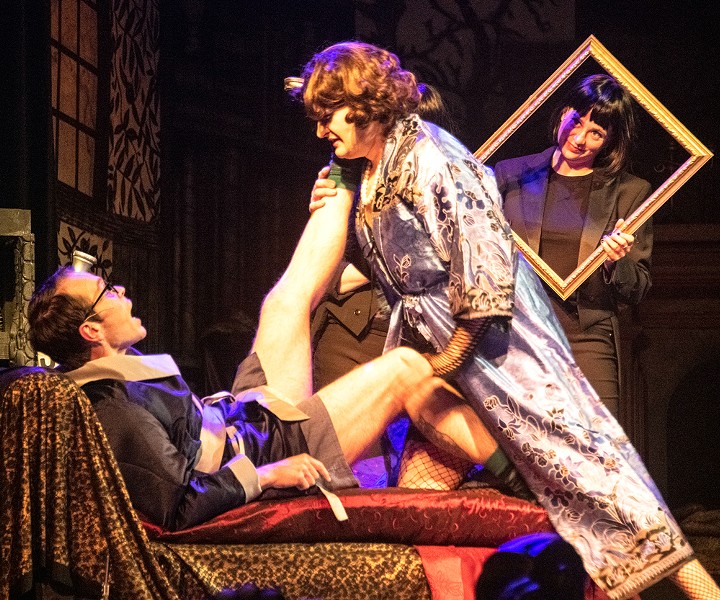 I wish I'd brought my Erotica red lip stain to Ferndale Repertory Theatre to mark the first-time audience members' foreheads with a large V to anoint them into the cult that is the The Rocky Horror Show, first mounted in 1973 with music and lyrics by Richard O'Brien, and adapted for the screen as The Rocky Horror Picture Show in 1975. For unaware virgins: Every person thrust into the theater for this fun production can be a part of the raunchy, campy action. While the actors perform, the audience, like voyeurs and hecklers given consent, call out lines and questions — you can even pay $5 for a bag of toys at the box office to enhance the experience. There are always people who have come repeatedly, ensuring a good time. The (in)appropriate number of obscenities screamed at the actors during the show will help you relax into it.

Fiancees Brad and Janet (Craig Woods and Holly Portman) have a blow out and end up at a castle during the night. Frank N. Furter (Rigel Schmitt) — um, a scientist? — reveals his creation Rocky (Keenan Hilton) to the — um, odd? — assistants. That's the plot. But Rocky is so over the top, anything more would spoil the layers that are already excessive in the best ways.

Rocky's appeal is its zany characters (not excluding the band and audience) and ridiculous scenes. This cast is challenged to step up its performance amid the scene-stealing antics of phantoms Carin Billings and Lillian Damron. From the hilarious dances (expertly choreographed by Cleo Deorio) to a monitor scene the audience's hoopla undoubtedly extended, the pair is impressive. Emma Dobbins's commitment and energy as Riff Raff stands out as she's one of few able to create balance with the music and sound to clearly fill the space with her singing. She's flanked by Veronica Ruse as Magenta and Stephanie McGeary as Columbia, both infectiously joyful in their roles. Alex Blouin's Eddie is a star's cameo that bursts onto the stage before getting axed. Brilliant. Brad Harrington's impossible job of playing straight man to these wild performances catalyzes everything. His take on the Criminalogist is dynamic, everchanging and hilarious, worthy of repeat attendance. It is easy for (asshole) Brad and (slut) Janet, as the audience shouts, to get steamrolled into obscurity by the sheer absurdity of the other characters. However, Woods and Portman hold their own. Woods with his incredible voice (though it was almost too good for his character) and Portman with her masterclass in melodramatics. She excels when she uses her chest voice (as in the "Touch Me" scene) to create more dynamics in her high-pitched character.

Hilton's rendition of Rocky is refreshingly played as almost unaware of his own sexiness. It creates comedy during his muscle flexing and an innocence that has been portrayed as stupidity with other, less skilled, actors. The gravity necessary to keep the scale of characters in his orbit is successfully accomplished by Rigel Schmitt's Frank N. Furter. He has a timing and confidence with his delivery that enables the audience's lines to fit seamlessly. His delivery has none of the slight stutter that might appear in the gaps sprinkled throughout the show for lines flung from the audience. By tasting the words in the script and inviting the audience to vicariously experience the feel of them, Schmitt's Frank could be even more mesmerizing in "antici ... pation" than it already is.

Director Cleo DeOrio has assembled wonderful talent and thanks go to David Powell for live music played by a band that obviously loves the score. Witnessing the joy of Mike Craghead, Amber Grimes and Jeremy Cotton as they danced while playing and Jesse Franzen undulating in the rhythm, was freeing. Denise Ryles's costumes felt less punk than I've seen but were sufficient in their recreation. I appreciate Michael Foster's simplicity in light design, especially "Rose Tint My World," which is stunning. Michael Charles Smith's scenic design is intriguing in gray and black, with accents of deep red and a painted castle backdrop looming over everything.

Rocky Horror Show is not everyone's cup of Earl Grey sipped with an erect pinky but is a cure to the elitism that births rebellion against prescribed normalcy. The conservative and quaint town of Ferndale hosting scantily clad, gender bent, cultish thespians who gravitate to this production amid the unsuspecting family-fun crowd is pure comedy and a show in itself.

Ferndale Repertory Theatre's The Rocky Horror Show continues Fridays and Saturdays at 8 p.m. and Sundays at 2 p.m. through June 19. Call 786-5483 or visit www.ferndalerep.org.