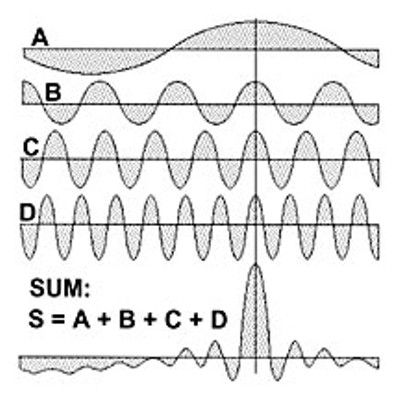 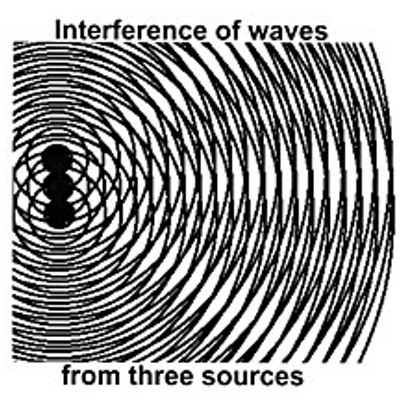 Waves are intimately connected to everything, even electrons and such, but let us begin with those that can catch you unawares on the beach or boat. Such rogue waves can be lethal.

Waves originate when wind blows across water. Two processes build larger waves from initial ripples: Frictional dragging and Bernoulli lifting. I have not heard anyone invoke the latter process, but it is clear that air moving over the top of a wave travels faster than air in the trough, and the lower pressure of that faster air would lift the crest and thereby increase the wave's amplitude.

One diagram shows how rogue waves "S" may be generated by interference among waves of differing wavelengths: S=A+B+C+D. Another complication is that longer waves travel faster and thus overtake shorter waves. And when waves approach a beach, their velocity becomes limited by depth, v = sq rt{gravity x depth}. They slow down, bunch up, rear up and break. Another diagram shows that even identical wavelengths produce interference patterns when they have multiple sources.

Light consists of waves, so it also exhibits interference phenomena. For example, different wavelengths representing different colors diffract off a CD at different angles. According to quantum theory, all objects have wave-like properties. The shorter the wavelength, the greater the momentum (mass x velocity). Electron "D," for example, has a well defined momentum but its position is unknown. The position of electron "S" is much better confined, but its momentum is unknown (being a combination of A+B+C+D). That's Heisenberg's Uncertainty Principle.

Remember, too, the uncertainty of ocean waves.

Regarding last week's "Designer Fruit," Robert Ziemer informs me that botanists consider oranges and lemons to be different species despite their ability to interbreed, and that Wikipedia (my source) should be corrected.