Roll the Tapes. All of Them. 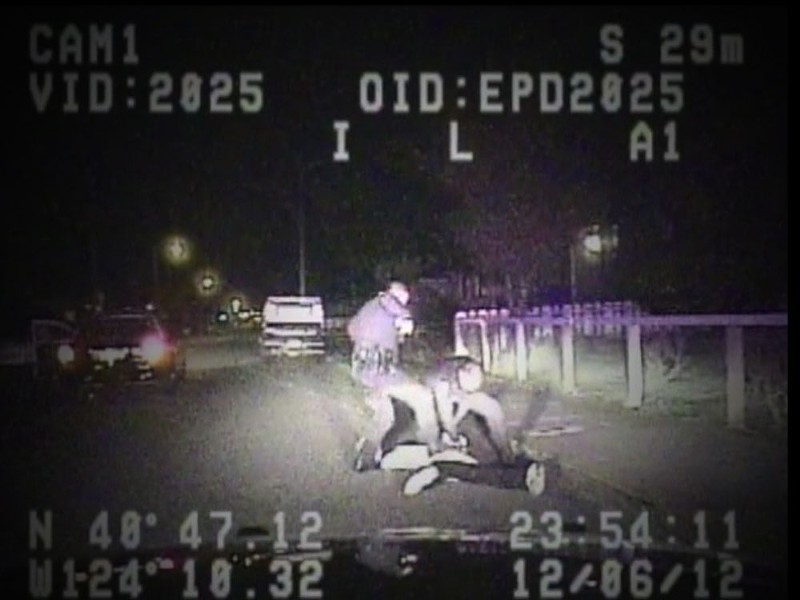 It really shouldn't be this hard. This week's cover story examining the prosecution of Adam Laird is the culmination of years of work. But that's not to say the story took particularly long to write or even to research. No, instead, the more than two years of work invested in this story were spent fighting to access the one piece of evidence at the story's core: video of Eureka police officers making an arrest in 2012.

This is a video recorded on equipment that we taxpayers purchased, mounted to a police patrol car that we also purchased. And the footage is of police officers — whose salaries we pay — carrying out their publicly entrusted duties in a public street. And this is a video that was used as the central piece of evidence to arrest someone, effectively ending his career. Yet it's a video that the city of Eureka didn't think you should see and actively fought to keep under seal, spending a still-to-be determined amount of limited public funds and staff time in the effort.

I won't bore you with the details of our legal squabble with the city — we've already written plenty about it. But it should be noted that in the end, a local judge, three appellate justices and the California Supreme Court all disagreed with Eureka City Attorney Cyndy Day-Wilson's argument that this video — and others like it — are confidential police officer personnel records. The case sets a statewide precedent that now prevents any other municipality or agency in the state from advancing the same specious argument.

But that doesn't mean we won't face a fight the next time we walk over to city hall and ask to see an arrest video. The fact of the matter is that the California Public Records Act still gives police agencies full discretion to withhold something from the public that's part of a police investigative file, no matter how old the investigation, what its status is or whether the video poses any risk at all of jeopardizing the investigation. Our legislators should change this.

But in the meantime, police agencies should realize they aren't doing themselves any favors by telling the public it can't see its officers carrying out their duties in public spaces. Such a stance all but ensures that the only encounters Joe or Jane Citizen sees are the ones that go sideways.

Look across the nation and you'll see police agencies at odds with the communities they serve. You'll see pervasive distrust flowing in both directions, bubbling over at the latest cell phone footage showing a questionable shooting or the latest headline about an ambushed officer.

Secrecy will do nothing to bring sanity to this climate.

Instead, I propose full disclosure. A local officer recently told me that he thinks it won't be too long before police video footage is treated like jail booking photos, presumed to be public records and available upon request. I say the time is now.

The average citizen has little to no understanding of what police officers face on a daily basis. They don't see the caustic interactions, the tense moments de-escalated or the genuine moments of empathy that are often on display as officers confront all of the ills that we as a society have dropped on their shoulders.

Instead, all they see is the latest video of a controversial shooting — and the ensuing protests — that lead newscasts across the nation. It allows us to assume the worst.

The cold hard truth of the matter is that we live in a society that has laws and needs police officers to enforce them. Sometimes that will necessitate the use of force and, as retired cop Richard Lichten says in this week's cover story, "any use of force looks horrible." But we as a community should treat each other like grownups and not simply pretend that which looks horrible doesn't exist.

Instead, we should put it on display. Let's watch our officers use force and make arrests, and then let's talk about what level of force we as a community are comfortable with and what we can do to keep officers out of situations that necessitate force. Let's lift the shroud and confront the hard realities that lie beneath. This isn't about pillorying a single officer or even a whole department, this is about taking an honest and unfiltered look at what's happening in our streets every day.

And to be clear, this isn't something I suggest naively. I realize that releasing all these videos means ugly things will be revealed. Officers and their families will be forced to relive dark moments. Some out there will no doubt take some sick joy in watching pain and suffering spill from the videos on their computer screen. Some families will have to live knowing that a loved one's violent death is available for viewing at the click of a mouse. But I would argue that we're living with the costs of the alternative and we've seen it play out in Ferguson, Dallas, Charlotte and countless other places.

When thinking about the issue, I frequently fall back on a line from the preamble of California's public records act: "The people of this state do not yield their sovereignty to the agencies which serve them. The people, in delegating authority, do not give their public servants the right to decide what is good for the people to know and what is not good for them to know. The people insist they may retain control over the instruments they have created."

Over the past two years, the Journal has fought to retain a small piece of our sovereignty by insisting the city of Eureka doesn't get to decide whether we should get to see what happened on a public street back in 2012. We were successful in this fight, and I am humbled that our efforts earned a Society of Professional Journalists Northern California James Madison Freedom of Information Award. But it shouldn't be this hard.

Next time, just give us the video and we can do without the award.

Timeline, at a glance:

The key dates in the criminal case against former EPD Sgt. Adam Laird and the Journal's years-long effort to obtain the video depicting Laird's 2012 arrest of a juvenile subject.

08.19.2014 – The Journal files a California Public Records Act request with Eureka and the DA's office seeking video of the Dec. 6, 2012, arrest. Both requests are denied.

11.21.2014 – The Journal files a petition with the Humboldt County Superior Court seeking release of the arrest video.

05.21.2015 – After several court hearings on the matter, Humboldt County Superior Court Judge Christopher Wilson grants the Journal's petition over the objections of the city of Eureka and the county of Humboldt and orders the video released.

07.10.2015 – The city appeals Wilson's ruling, arguing the video is a confidential police officer personnel record and should have been afforded special protections.

07.19.2016 – The appellate court upholds Wilson's decision in a published opinion explicitly stating that the video — and others like it — can't be considered a confidential personnel record under the law.

09.19.2016 – The city files a petition with the California Supreme Court, asking it to depublish the appellate court's opinion to keep to from setting a statewide precedent. The petition is later denied.

Thadeus Greenson is the news editor of the Journal. Reach him at 442-1400, extension 321, or thad@northcoastjournal.com. Follow him on Twitter @thadeusgreenson.