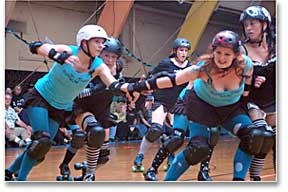 Like so many couplings, theirs began with a terse Craigslist posting a few weeks back.

"Looking for a woman 21+," the ad read, "to help co-found Eureka Roller Derby. I've got the knowledge if you've got the time!

"Must be able to skate on quads (4 wheel roller skates) and have excellent leadership abilities. Contact Bonnie if interested."

The compensation promised for the volunteer position? Scars and memories.

Bonnie "D. Stroir" Beck is the founder and coach of the San Diego Derby Dolls, a squad comprised of 31 players with alter-ego rink names like Steely Jan and Pippi Broadknockings. Beck went on the prowl for a Eureka-based co-founder to ensure that a North Coast team would be fully established when she moves to Humboldt County. In 2010.

Seem overeager? Fanatical? Obsessed, maybe? That's the response the long-dormant sport seems to elicit in its players, women who've brought it to the forefront of the punk scene through grassroots organizing. Beginning in cities like Austin, Seattle, the Bay Area and New York in the very late '90s, it quickly found its way to smaller metros. Now podunks like Eureka are finally witnessing the revival of roller derby.

For those whose impression of the roguish sport is trapped in 1972 when Raquel Welch starred in the wonderfully horrible B-movie Kansas City Bombers,roller derby has taken on a different twist. Gone are the hair-pulling histrionics that piqued the interest of both 10-year-old boys and girls and 50-year-old weirdos. Also gone for the most part are bank-sided rinks. Now, leagues use flat tracks, hence the national Women's Flat Track Derby Association, which has over 100 members nationwide. The flat rink lends itself to the sport's underground, DIY element that saw fishnet-clad roller derby lovers practicing in gymnasiums or old warehouses where they'd simply duct tape boundary markers on the floor. But as the sport's popularity builds so do profits, and expensive banked tracks are making their comeback. Beck's San Diego Derby Dolls recently installed banked sides on their rink and she hopes to see somebody do the same in Eureka.

This post-millenium roller derby renaissance has prompted laudatory news articles of soccer moms and nine-to-five professionals traveling great lengths thrice weekly to hit the rink and bond with tattooed amazons. An almost cult-like commitment has been fostered for the offbeat sport and it's catching on.

"From what I gather for girls who do roller derby, it is their end-all-be-all," said Jennifer McMahon, co-owner of Primal Décor, a Eureka tattoo and piercing shop. "I'm fascinated by it."

So fascinated, in fact, that she answered Bonnie Beck's ad in late December and has already booked a February flight to San Diego to meet her new partner. The trip will also serve as her official introduction to roller derby in SoCal, where she'll watch a bout between the Los Angeles and San Diego teams and get thrown into the rink herself at a rookie practice.

McMahon, says she's excited to enter the hardcore world of roller derby but admits to some apprehension.

"I'm a tough girl," said McMahon, who bears an uncanny resemblance to actress Jennifer Tilly. "I get tattoos and piercings, I'm not afraid of falling down. But [roller derby] still seems scary." The 34-year-old has been psyching herself up, roller skating around her neighborhood and studying derby videos.

"You do kind of knock girls around, but not like back in the '50s where it was kosher to hit," McMahon said. "If you purposely elbow some girl in the head you are going to get in trouble."

The object is to get your team's "jammer" to pass the other team's blockers. Jammers score the points. Blockers often send their opponents to the floor in the process.

Before she contacted Beck, McMahon said she started researching roller derby over the summer with hopes of starting a league on her own. But when she realized how much time it would take and the complications that would arise, among them getting insurance to practice at city-owned rinks, she put the plans on hold. But with some guidance from Beck, McMahon has made quick work of finding a venue - the Eureka Municipal Auditorium - and she has already enlisted help from USA Roller Sports and her "local insurance lady" to secure liability coverage. On Tuesday she struck a deal with the Eureka Muni management to open up for women's derby practice in April, two months earlier than she originally projected.

With the toughest obstacles behind her, it's now a matter of finding interested players, something McMahon thinks will be pretty easy. "I'm a good networker," she said. About 15 women, mostly clients at Primal Décor, have already expressed interest. Others have simply offered money but McMahon turned down the offers.

"I want it to be about the skaters: Skater-run, skater-owned," she said, adding that it might not be wise to "let some outside investor have control. It's girls trying to have fun. I don't want it to be anything else. Otherwise it starts getting kind of sticky."

Beyond that, McMahon said she's looking forward to offering a new form of physical recreation for women of all shapes and sizes.

"It will be a good message that you don't have to be a size two to be good at something," she said.