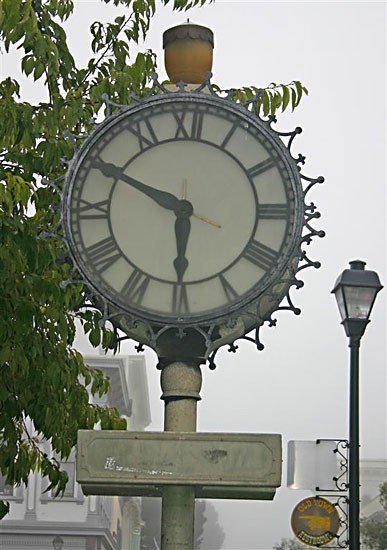 Although we normally use so-called Arabic numerals, their Roman counterparts are far from dead. In addition to the above examples, they're used to date movies; to identify book volumes such as encyclopedias; to mark off the front matter in books from the body, usually in lowercase (i, ii, iii, iv ...); for the cornerstones of buildings; for subsections in laws; etc. Once you start noticing them, you'll see them everywhere!

The Roman number system derived from the Etruscans of ancient Italy. Etruscan 1, 5 and 10 were written I, ? and X, becoming Roman I, V and X. The Etrusco-Roman symbols probably derived from tally sticks, as I discussed in a previous column on Arabic numerals. A notch across a stick became I, while every fifth notch was marked with a double cut (? or V) and the tenth notch was cross cut (X). (Or perhaps ten -- the number of digits on two hands -- came first and the ? or V was subsequently derived from half an X.)

The other Roman numerals -- L, C, D and M, for 50, 100, 500 and 1,000 -- don't lend themselves quite so readily to interpretation, but we're pretty sure that the Romans ultimately adopted C for centum (100) and M for mille (1,000), while the D may have come from demi-mille, half a thousand. The Roman system doesn't include a zero, which is probably why the Arabic system (which originated in India) was adopted so readily in the Middle Ages.

So why do old clocks -- like the ones on 2nd Street in Old Town Eureka -- show four as IIII, not IV? Nine is shown as IX, so why isn't four written as IV? One explanation is that the pairs of numerals IV & VI and IX & XI are easily confused, but that IV and VI are doubly confusing because the IV is partly upside-down. Clockmakers responded to this ambiguity by using IIII for four.

Now we've got that straightened out, you can ask yourself: Why do clocks only go up to 12, when there are 24 hours in a day?

Barry Evans (barryevans9@yahoo.com) wakes up each morning worrying how the Romans got to be so powerful without having a symbol for zero. He lives in Old Town Eureka.