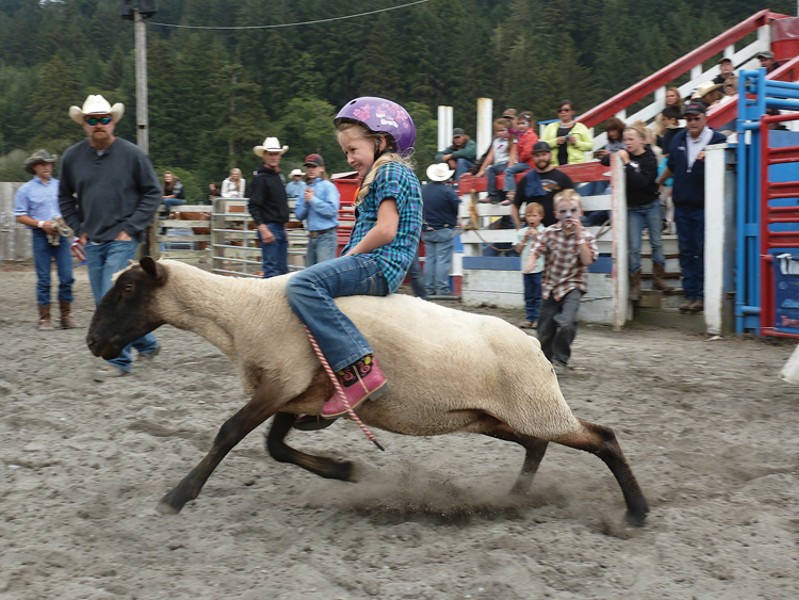 photo by Ryan Burns ... and another practices her dismount.

Jenny Millsap hoisted her 3-year-old, 30-pound son Richie over the metal railing and lowered him into a corral at the Orick Rodeo. A burly cowboy grabbed him by the armpits and propped him astride an agitated sheep. A rope had been drawn around the sheep's chest, and the two men who'd squeezed into the corral with the animal helped Richie tuck his little fingers into the soft wool underneath. The chinstrap on Richie's bulbous bicycle helmet pushed his lower lip into a pout. Motionless and wide-eyed, he stared at the spot between the sheep's ears.

As Alan Jackson's "Country Boy" blared over the PA system, a teenage girl leaned over the corral gate and offered the toddler some advice: "Now, Richie," she said, "you gotta hold on really tight, okay?"

A moment later, the gate swung wide. For a second the sheep just stood there. Then, like a prisoner who sees his chance, it lurched into a herky-jerky run. Richie's helmeted head bobbled backward and forward as he clung to the rope. The sheep galloped awkwardly into the arena, kicking up little clouds of dirt as Richie's body began to slide off to the right. He tipped further and further until, about 40 feet into his ride, the 3-year-old splayed headlong into the powdery dirt.

By the time the adults reached him, offering high-fives and his choice from a box of Tootsie Pops, Richie was already standing up. The left side of his face was dusted with brown dirt. He grabbed the sleeve of an older kid's shirt to rub the grit out of his eye while a woman in blue jeans leaned down to tell him what a great job he'd done. "Wave to the crowd," she said. Richie, disoriented, lifted his head, turned in the wrong direction and waved to the forested hills.

This event, in which parents set their young kids loose on galloping sheep, is called mutton busting (or "mutton' bustin'," as it's listed for the Orick Rodeo), and in recent years it has grown into one of the most popular spectacles at rodeos nationwide.

Some people view this activity as a shocking display of parental irresponsibility. (A friend of mine half-jokingly called it "sanctioned child abuse as spectator sport.") But for the gritty, rural-living families that travel the rodeo circuit, mutton busting offers an initiation into their rough-and-tumble lifestyle.

"I was brought up with it," said Jenny Millsap, Richie's mom. She and her family live in the small Trinity County town of Mad River, and for them, riding non-consenting animals is a family tradition. Last weekend wasn't even Richie's first rodeo; he rode a sheep last year, too -- at the tender age of 2.

Most young mutton jockeys were ready last week. Six-year-old Jacob Leroy from McKinleyville claimed to be the defending champion. (Technically there are no winners, or rather everyone's a winner -- each kid gets a Tootsie Pop and a T-shirt that reads, "I rode the wild sheep.") Before the event started, Jacob stood in the arena, squinting into the sunlight as he watched other kids play tug-of-war. He took a Tootsie Roll out of his pocket, peeled off the wax-paper wrapper and popped it into his mouth. We asked for his secret to successful mutton busting. He thought about it for a bit while chewing his candy. "I dunno," he said. After some encouragement from his dad, Leroy spilled his secret. "To um, um, to push with my butt."

Sure enough, Jacob skillfully rode his sheep nearly the length of the arena before tumbling off. He practices by riding the family steers while they're being vaccinated.

But not every child proved a natural. A 6-year-old named Wyatt was thrown when his sheep lurched out of the gate then abruptly stopped. Wyatt tipped forward onto his face, and when he stood up he was clearly fighting back tears.

On Sunday (the event stretches over both days of the Orick Rodeo), a kid named Eric Jackson slid sideways off his sheep after only a few seconds, but he either couldn't or wouldn't let go of the rope. His sheep dragged him through the dirt for another 60 feet or more as the crowd gasped in horror. It looked like he was getting trampled under the sheep's hooves. When he finally got loose of the galloping ruminant, the back of his green flannel shirt was ripped to shreds, but Eric was just fine. There was obvious relief in the PA announcer's voice as she declared, "Not a tear shed!"

Parents can get pushy. On Saturday, a dad held his curly-headed girl in the crook of his arm while he and his wife urged her to compete. "The sheep's more scared of you than you are of it," the mom promised. Then her dad resorted to bribery. "I'll give you money," he said in a sing-song voice. The girl still refused. Her parents gave up.

To participate, the kids are supposed to be at least 4 years old and no more than 60 pounds. (Apparently those guidelines are negotiable.) Ticki Romanini, the 81-year-old co-chair of the Orick Rodeo, said there's been just one complaint about mutton busting since they started doing it 16 years ago. "'Barbaric': That was the word," Romanini said. But she disagrees.

Like many parents, she said the event builds character, and most kids enjoy it. "Those little guys come out there and they've got their little cowboy boots on and their little hats. ... And they think they're just as big comin' outta there on a sheep as those bull riders are on a bull," she said with a chuckle.

As for the rules, she said, they're simple: "Hang on and pray a lot."