Room for the Missing 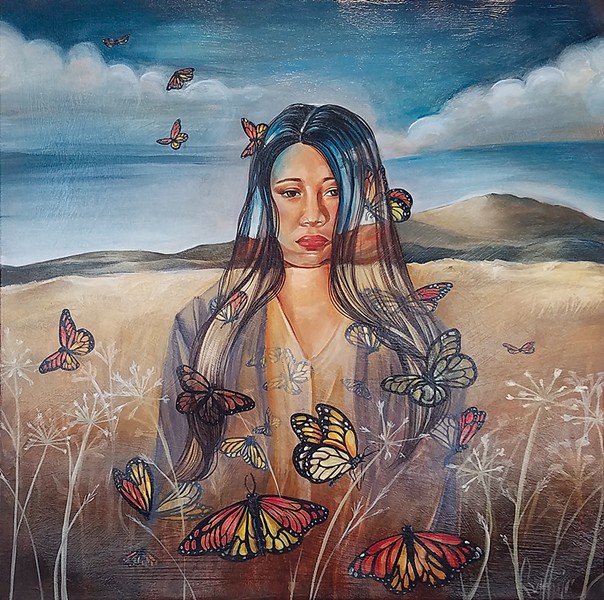 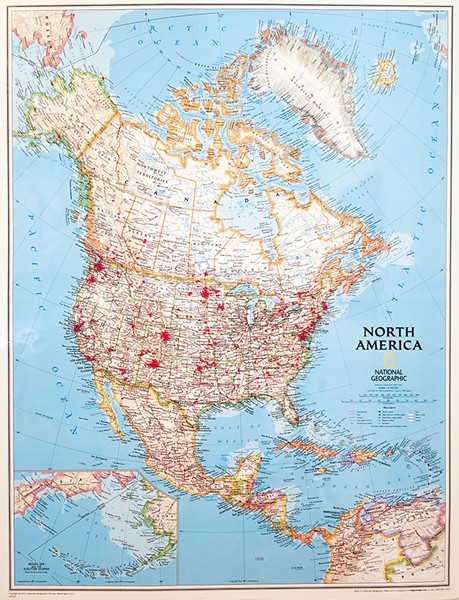 This month Humboldt State University's Gou'dini Gallery hosts Sing Our Rivers Red, a traveling exhibition that seeks to call attention to the epidemic of missing and murdered indigenous women across North America. Organized by a group of 10 artists calling themselves the SORR Collective and sponsored by groups at institutions, including North Dakota State University, Minnesota State University Moorhead and Concordia College, it aims "to raise consciousness, unite ideas and demand action for indigenous women, girls, Two Spirit and LGBTQQIA people who have been murdered, tortured, raped, trafficked, assaulted or gone missing."

"Sing Our Rivers Red: Earring Installation" comprises a long scroll of black burlap supporting hundreds of sparkling, brightly colored earrings. Each hoop and chandelier represents an indigenous person who has been murdered, sexually assaulted or reported missing. The earrings were donated by community members from more than 400 locations in Canada and the United States as a tribute to loved ones. Project organizers received more than 3,400 earrings in response to their call for contributions. A map created with the help of the Fargo-Moorhead Native American Girl Scouts pinpoints donor locations. Several cluster in the immediate area. The wall text cites statistics that suggest the magnitude of this ongoing tragedy:

"Since 1980, over 1,181 Native women and girls in Canada have been reported missing or have been murdered ... According to the U.S. Department of Justice, nearly half of all Native American women have been raped, beaten, or stalked by an intimate partner; one in three will be raped in their lifetime, and on some reservations, women are murdered at a rate 10 times higher than the national average."

Sing Our Rivers Red posits that the high rate of abuse experienced by Native women today is connected to the fact that their abuse has been historically legitimized through ingrained societal beliefs about white supremacy and racial conquest. When exhibition organizers describe this "gender-based violence" as colonial, they emphasize the fact that the institutionalized sexual abuse, enslavement and exploitation of women from subject populations has long been an integral part of the colonial experience. From Malinche to Sacajawea, no indigenous woman from frontier history whose name has been recorded can be contemplated apart from this history of violence.

The Diné and Chicana artist Nani Chacon's painting "Missing" represents a brown-skinned, long-haired girl standing pensive in a field of prairie grasses — well, not standing exactly but drifting in a spectral way; she is slightly translucent, barely there. You can see right through her and out to the horizon. Her delicate features are overlaid with fluttering orange and black monarch butterflies, as though a photographic negative had been doubly exposed.

The monarch, a beautiful and iconic species native to North America, is famed for its 1,000-mile annual migration. Once widespread, it has suffered drastic population decline in recent years due to pesticide use and loss of habitat. Chacon's painting likens missing indigenous women to the missing butterflies, as parallel tragedies that stem from a proximate cause. The first-person text that accompanies the piece calls out the misogyny, violence and sadism of the colonial experience, citing Western colonizers' attitudes toward indigenous populations and lands that figure Native women in a purely instrumental, objectified way, as resources to be taken and despoiled — much like the natural environment itself. "I wanted to depict the connection between land and women," Chacon writes. "I see that we are mistreating and killing both."

Across the room from Chacon's painting, a concert performance featuring Inuit throat singer Tanya Tagaq performing with the Toronto Symphony Orchestra plays at low volume on a television screen. The piece being performed, "Qiksaaktuq," was improvised by Tagaq with conductor Christine Duncan in 2017 as a lament for missing and murdered indigenous and First Nations women.

There's a strong practical aspect to the exhibition, which features a display with information about local and national resources for victims of violence, as well as two stations where viewers are encouraged to add their personal stories to a communal wall by writing on post-it notes. "May this exhibition be an expression of art as a medium of resistance — an activation that reclaims, revitalizes, and remembers," one person had written. Another offered a quote from Dr. Martin Luther King Jr.: "We must accept finite disappointment, but never lose infinite Hope."

Sizable spatial intervals separate these works of art in the Gou'dini Gallery. A red line drawn on the wall connects the pieces, evoking the "rivers red" of the exhibition title. The space looks relatively empty but exhibition organizers would have us understand that this is part of the point: "The remainder of the space will be left unoccupied, leaving conceptual space for the missing and the murdered."

Sing Our Rivers Red will be on display at the Gou'dini Gallery through Oct. 19. The Goudi'ni Gallery is located on 17th and Union streets, on the ground floor of the HSU Behavioral and Social Sciences Building. Gallery hours are noon to 5 p.m. Tuesdays and Wednesdays, noon to 7 p.m. Thursdays and Fridays (open until 8 p.m. during Arts! Arcata) and noon to 5 p.m. Saturdays and Sundays. For more information, visit www.singourriversred.wordpress.com.